The new teen drama has everything you want from a classic teen romp, topless babes solving a disappearance in the summer we always dreamt of having in (aptly) the Outer Banks area of America. But in the hands of its breakout cast, namely Madelyn Cline who plays Sarah – a rich gal who falls into the arms of someone from the rival crowd, the drama goes a lot deeper. 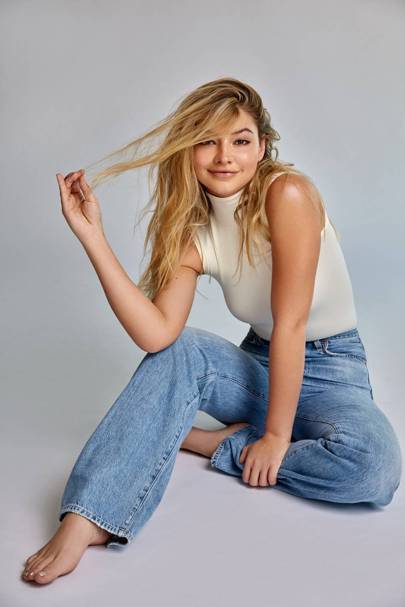 Madelyn Cline may be in lockdown right now in LA, having not “left my apartment building for a week, save for going up to the rooftop just to get some actual air,” but physical confinement is not preventing her star rising in Netflix’s 2020 answer to The OC, Outer Banks.

Here, Madelyn who previously appeared in Boy Erased, talks about living her best lockdown life with her Outer Banks cast mates crashing at her house in sleeping bags, overcoming toxic relationships IRL and how the rejection at the beginning of her career ultimately empowered her…

How are you keeping sane and looking after your wellbeing right now?

I am learning how to play guitar – trying, that’s the key word! FaceTime is saving me, though, and I’m lucky because one of my castmates, Drew (Starkey) lives upstairs. We live in the same building so we’re able to hang out and I’ve got a couple of my castmates bumming it with me right now, so I’m not completely alone. I’ve got sleeping bags in my living room, and we’re doing a Harry Potter marathon – it’s like a big old sleep over!

This show has all the juice of The OC but brings the teen drama into 2020. What do you think you’ve learned about yourself through playing Sarah?

It’s interesting because I feel in a lot of ways I relate to Sarah because we are both from the South and I feel, shooting this, I kind of fell back in love with the South. There are a lot of lessons I feel Sarah learns in the first season about finding her voice when she feels something isn’t right, going against the grain and standing up for what she believes in, versus what she’s told to believe in. That’s something that I definitely can relate to. When I moved out to LA, I learned a lot about myself and I learned to find my voice, and so I rediscovered that in Sarah. 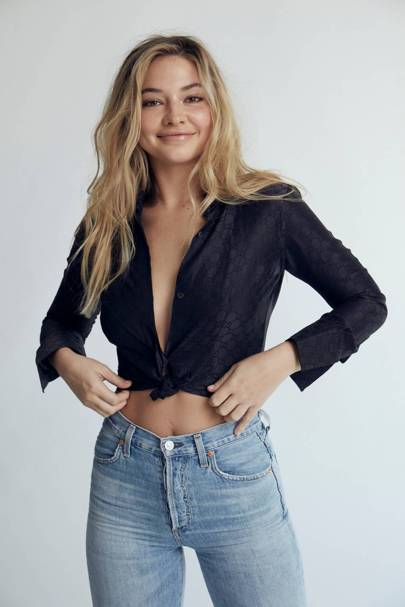 How have you learned to stand up for your own voice?

I think if I could pick one moment it would be when I was going to college in the South and it wasn’t what I wanted to do. I knew I wanted to be out here in LA and acting. I remember one day at college realising I had just enough money I could move out here against my parents’ wishes. I just realised that I was completely miserable doing what would make other people happy. So, I called my mom and said, “Hey, are you sitting down?” And I told her, “You know what? I know this is what you guys want me to do, but it’s not what I want to do, so I’m going to drop out and I’m going to move out to LA and I don’t need help, but I just would wish for your support.” And she just said, “All right, I’ll handle your dad.” So just a few months later I got some roommates and I moved out here. It was difficult, but we wouldn’t be sitting here right now had I not followed my gut.

It’s amazing to have that level of faith in yourself…

It’s crazy, because when I think about it now, I’m like, “Thank God for being young and stupid.” I think about moving across the country, barely having the money to do it, it gives me so much anxiety. I think there’s something to be said for just not knowing, being a little naive, and just flying by the seat of your pants, because it is a big thing, it’s really stressful. But I think sometimes when you know you know.

How did you find the early days of going to the auditions, after auditions, and how have you dealt with that, the idea of rejection?

So, the early days of auditioning were very discouraging. When I first got out here, I was barely getting into any rooms. I had roommates and friends who were getting into a lot of rooms, they were getting a lot of director sessions and call backs, and they were booking things. I felt like, “What am I doing wrong? Why not me?” The early days were really difficult because it was constant no’s, I didn’t have an agent. I always knew that I had something to offer, but it just felt like I could never get someone to give me a chance.

LA is a harsh city to be in when you’re a little girl from the South, and you have absolutely no idea what you’re doing and you are thinking, “Am I making, have I made a massive mistake? I don’t have money to move back home. My parents are not on board with this. What do I do?” But you have to convince yourself that, you genuinely have to believe that it’s, “when,” not, “if.” 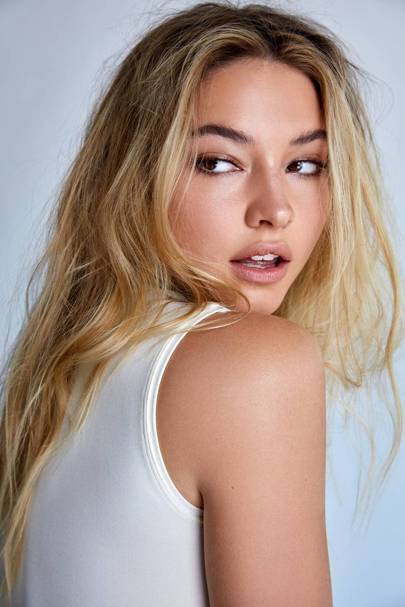 Was there piece of advice that saw you through that time and gave you faith in yourself?

My mom and my dad – not necessarily pertaining to this – always used to say, growing up, “If you ain’t wrecking, you ain’t racing.” So, I would always tell myself, “You can’t have those amazing highs if you don’t have those lows.” You wouldn’t truly be living the LA experience, in my opinion, if you don’t move out here and sh*t doesn’t hit the fan. When I first moved out, we were living in this jail house apartment complex and we ended up getting bedbugs, my roommate and I were living out of our cars for two weeks, and that was on top of just not auditioning. In those moments I just kept telling myself “If you ain’t wrecking, you ain’t racing, baby!”

You have clearly become so close with the Outer Banks castmates – what has this show taught you about the power of friendship?

Oh God, through this cast, through the show I have gained the friend group that I’ve always wanted, people who are like-minded. I’ve never been surrounded by more supportive, talented, equally ambitious people in my life. I’ve noticed, because of them, LA’s became home to me. They are my community and it’s amazing that we all get to share this. Home is where you have those people who are constantly pushing you to better yourself, for your career and for other people. It’s amazing to have a cast who holds each other accountable like that. It’s pretty damn special. I would be losing my mind right now if I didn’t have them?

Outer Banks touches on so many issues that are so relevant to the teen experience – but for you sitting in society in 2020, what is the most pressing issue for you?

What I love about this show is that it is modern day, but it’s timeless in that you don’t see a lot of cell phone usage. You don’t really see the kids in school, so it’s also like the summer that you’ve always wanted. I think it’s an important message to turn your phone off. We need to stop living through a screen. You have this wonderful world around you and start making connections to the people in front of you. Enjoy the moment you’re in. One of the biggest messages from this show is you don’t need phones to have community, and I feel sometimes we’re tricked by that a little bit. 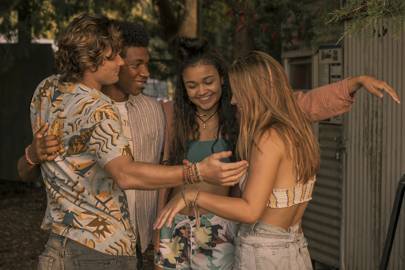 Is lockdown making you realise that human connection is the greatest thing of all?

Absolutely! You could probably ask 80% of the people in my phone, I am one of the worst communicators over text. I see it and I think, “Okay, make a mental note to respond,” and then I always forget. For me personally, I crave one-on-one time with people and group conversations or group activities where you’re actually connecting with your friends. For me, connecting through a phone, it’s a quick fix, if you can’t see them and it’s always important to keep up with people and let them know you’re okay, but for me, I’m definitely a face-to-face person, I prefer to have my conversations face-to-face, I prefer that connection – that is not something you really have in 2020.

How do you hope this shows changes conversations? Is there anything you hope that people take away from it?

I think the first thing is the whole issue with Sarah kind of breaking the mould a bit. We have the Kooks who are trust fund babies and second homers in the community and then you have the Pogues who are the working class. You have this divide at the beginning of the show, and progressively see how Sarah bridges that gap and breaks those expectations of someone like her. It shows we can’t or shouldn’t be categorised, we’re all human.

I also feel like with Sarah’s onscreen relationship with John B, Chase – who plays him -and I had a lot of conversations about making sure that her relationship with JB was very equal and very much respectful from him, as a male towards the female. It really will show a lot of girls what a respectful relationship looks like, even when you’re a teenager. I can speak for myself, I’ve been through a lot of toxic relationships and I’ve experienced a lot of it like gas lighting, manipulation -you name it! For young females to see what it means to have respect from a male is really important to me. Even if it is on a TV show, I at least want it to model that and Chase does as well. He wanted to break those barriers for masculinity and what masculinity looks like in a character. That was something that we teamed up on, we both had those ideas before we even shot the show. So those are the two big things for me. 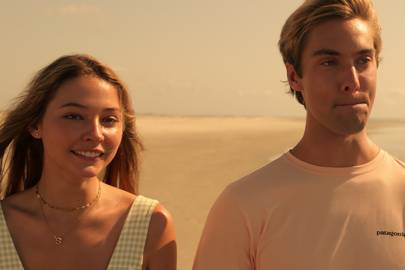 Given the camaraderie on set what was the biggest laugh out loud moment?

I think I’ve a vulgar sense of humour, but it was a super serious moment, it was the middle of the scene, it was 3:00 AM and everybody was super tired. And all of a sudden, Rudy, who plays JJ just did a massive fart mid-scene and all of a sudden everything stops. Sheree lost it; you could hear out our cinematographer laughing under the hood of his little camera station. It had been such a stressful day and it was everything everyone needed. Oh, there was also a time mid-scene my underwear ripped which isn’t ideal when it’s hot, you’re uncomfortable and you’ve got these little Daisy Dukes on!

This Unexpected Tip Has Eased My Anxiety

Spotify Announced the Most Popular Workout Songs of the Moment