I see him, maybe not so clearly. He is in isolation, in a straitjacket. He’s just been committed, given a shot of haloperidol after he resisted going to the locked ward. He kicked, screamed, yelled, threatened…and now he cries.

In the middle of elective inpatient electroconvulsive therapy for treatment-resistant depression, he had become profoundly depressed, delirious, and hopeless. He’d lost faith in treatment and in reasons to live. He withdrew to bed and would not get up or eat. He had to be committed for his own safety. Several security guards had to forcefully remove him from his bed.

He happened to be a 48-year-old surgeon who worked in an academic medical center. He had gone to medical school intending to become a family doctor like his father. He never imagined becoming a surgeon; he thought surgeons were pompous, and that’s being kind. But he fell in love with surgery – the decisiveness, the immediate “cure,” the bravado. He promised himself he would behave differently from some of his educators and emulate the many who inspired him.

I know all these intimate details because I am this surgeon-patient. 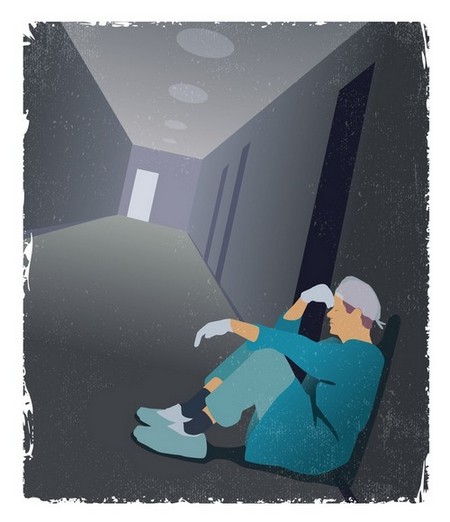 My training occurred before work-hour regulations were created. Every-third-night call was the norm; every-other-night was common. On one rotation, we were “rewarded” with being the operative resident on post-call days, which extended our shift to nearly 36 hours. On my trauma rotation, we took 48-hour shifts alternating with 48 hours off, to maximize the consecutive hours we could spend with family or friends. They call it “residency” for a reason, we were told.

I became an acute care surgeon, commonly known as a trauma surgeon. We are the ones who respond on a moment’s notice to care for the seriously injured. We remove unwanted appendices as well as desired limbs. I remember the pain, early in residency, of witnessing a young man who had lost both his arms in an electrical incident, but my recollection of the countless limbs I subsequently removed is vague or nonexistent.

We attend to critical illness and have tools that save people’s lives, but sometimes I know I have used them to extend life too long. We face and witness death on a daily basis. We care tremendously about the welfare of our patients, their families, our trainees, our colleagues and coworkers, though I haven’t always shown that care as well as I could. We often make decisions in the face of uncertainty that deeply affect our patients’ lives. When things went wrong, I frequently blamed myself. I learned that doubt, ignorance, and lack of confidence were my own failings.

As attending staff, I still take 24- to 36-hour “shifts” of in-house call. A third to half of my weekends may be spent in the hospital. Early in my career, I even covered full weekends in the hospital, a 72-hour shift, in order to have more whole weekends with my family – and probably to demonstrate my machismo.

One might have predicted my fall. I have had depression and dysthymia since my teen years. When I was a third-year resident with increasing operative independence, a couple of surgical complications threw me into a funk. I convinced myself that I shouldn’t be a surgeon. I wasn’t good enough, technically or cognitively. I didn’t have the fortitude. I was a fake.

I didn’t know what to do with these feelings. I didn’t believe anyone around me had similar thoughts. I didn’t know how to talk to my coresidents or faculty about medical mistakes and the accompanying self-flagellation. I don’t remember anyone talking about such issues back then.

I was fortunate that my wife knew how to listen and understood my world. I endured. I completed residency and fellowship and continued to endure for 16 years. Outside observers might have perceived me as “having it all”: a surgeon with leadership promise, with an amazing wife and two great kids, who’s paid more than I ever expected to earn.

But enduring is not thriving. I had heard of burnout but didn’t really comprehend it. And though I had mental illness, I still saw it as a weakness, a personal fault. I remember early in my career hearing of a colleague who took a leave of absence for a “nervous breakdown.” I joked about it, said he was weak. Now it was my turn.

My work lost meaning; I was just going through the motions. I thought everything I tried to accomplish was a failure. I had trouble relating to patients and felt the urge to avoid encounters altogether. I cared less and less about anything I was doing. I didn’t know it then, but I had long experienced classic signs of burnout: emotional exhaustion, depersonalization, and low perceived personal achievement. But the burnout had been waxing and waning for 22 years; now I was in the worst episode of major depression of my life.

I wanted out, out of work and out of life. I wished I would get hit by a car, and sometimes took steps to increase my risk. I felt trapped in my work and worried that I would expose my shortcomings if I sought a leave or disclosed my feelings. I’ve subsequently learned that my colleagues were quite concerned about me but found me unreceptive to attempts to help. I was trying to get help in many ways, but nothing seemed to work.

My functioning continued to decline until I could barely interact with others. My wife forced me to see my family doctor, who insisted I take a medical leave. I went electively to a psychiatric hospital. It was humiliating. I was scared, and I was certain my career was over.

I went through a full course of electroconvulsive therapy and other treatments and felt better for a while. I even returned to work, prematurely. My depression came back with a vengeance. My severe psychological pain was unrelenting. I was suicidal and developing a plan to take all the pills I had. Even as I held onto the love of my children and wife, my brain told me they would be better off without me. I contemplated death, though I feared the finality – perhaps death would be even worse than what I was experiencing.

You would not be reading this today were it not for the love of my wife, my children, my mother and sister, and so many others, including the guards and doctors who “locked me up” against my will. They kept me from crossing into the abyss.

I had convinced myself that I had end-stage depression, that there were no other treatments, and that I would be forever depressed, as I remember my grandfather being. Yet my healing has been considerable. I am happier and more optimistic than I have ever been in the past 50 years. I have never enjoyed being alive more than I do now, in each present moment.

My family, supported by an expert-guided, trial-and-error approach to pharmacologic therapies and compassionate cognitive behavioral therapy, opened my heart to a new perspective of accepting and appreciating life through mindfulness philosophies and practices. I am discovering the habitual self-destructive patterns of thought that restrain my unconditional confidence.

For over a year, I have been back at work in the same capacities as before. I find daily joy in interactions with patients, their families, colleagues, trainees, and our heal
th care team. I also find daily frustration in the workload, the amount of time spent in the hospital, the shrinking control we have over our work environments, and the economic drivers in health care. I am concerned for future generations of clinicians unless we change how we teach and practice medicine. We need to devote time and resources to promoting self-care. Too many physicians leave practice prematurely. Too many physicians take their own lives.

I have been open about my illness and, though I had feared reentry, I returned to a supportive and compassionate group of coworkers. I have learned that many of us suffer in silence, fearing the stigma associated with mental illness. I feel compelled to share my story, which I’ve found offers others an opening to express their own suffering. I believe that by deploying tools for reflection and self-care and working together in a brave and disciplined way, we can remove our restraints and isolation – both figurative and literal.