Scientists think it might explain why some people suffer from allergic reactions which they had previously believed was coming from just the ink. However, after digging a bit deeper they realised it’s not just the colour pigments that leak in the body’s lymph nodes, it’s the chromium and nickle particles from the needle too.

If you’re thinking of getting a coloured tattoo you might want to listen up because you could be left with more than sore skin.

A new study has just discovered that small metal particles from tattoo needles are making their way to the body’s lymph nodes.

The two metals are shed from the needle when they react with titanium dioxide – a pigment that is often found in coloured tattoo inks such as blue, green and red.

Researchers from the European Synchrotron Radiation Facility (ESRF) in Grenoble, France made the discovery after realising that several human tissue samples contained metal needle particles but they couldn’t work out why until they turned their attention to the actual needle.

The team used powerful X-rays and realised the metals were only present in the nodes when they had reacted with the abrasive agent titanium dioxide which they say was their “eureka moment.” 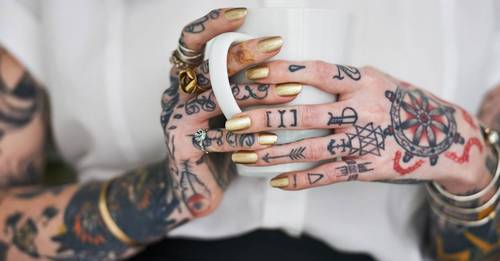 Study author Hiram Castillo, a scientist at the ESRF, said: “There is more to tattoos than meets the eye. It is not only about the cleanliness of the parlor, the sterilization of the equipment or even about the pigments. Now we find that the needle wear also has an impact in your body.”

The metal particles that the scientists found in the lymph nodes range from around 50 nanometers long (that’s pretty much as small as DNA molecule) to a bigger two micrometers long (about the size of a bacterium cell).

Sadly, the long-term effects of having tattoo metals in your body are unknown. Schreiver said: “Unfortunately, today, we can’t determine the exact impact on human health and possible allergy development deriving from the tattoo needle wear.”

The author added: “These are long-term effects which can only be assessed in long-term epidemiological studies that monitor the health of thousands of people over decades.”

The best advice? Maybe stick to a classic black tattoo for now…

I’m the UK’s no.1 cleaning expert and here’s my guide to cleansing your house