When I sit down with the Korean band for an interview at their hotel a day after the New York City stop on their We Rose You Live world tour, Dojoon still has a sweet message, love, written in capital, block letters on the top of his hand that flashed to the crowd whenever he picked up his guitar.

Drummer Hajoon also recently tricked fans into thinking he had a chest tattoo, but he etched on a rose and “We Rose You” with liquid liner  – by himself, much to the surprise of the other members and me. And Jaehyeong, The Rose’s bassist, dabbles into the body art world by decorating his hand with stars, smiley faces, and music notes.

Their eyeliner insignias are truly an upgrade from the water-activated temporary tattoos I loved as a kid.

Like most rock bands throughout history, the boys of The Rose have an affinity for black eyeliner. However, they aren’t strictly smudging it around their eyes à la Billie Joe Armstrong or Pete Wentz. Hajoon, Dojoon, and Jaehyeong have been drawing designs onto their hands, cheeks, and chests as temporary tattoos before heading on stage. 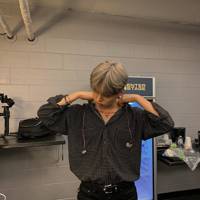 Although The Rose’s public persona strictly focuses on the music part of sex, drugs, and rock ‘n’ roll – they are a K-pop band at the end of the day – the guys still experiment with the trademark rockstar adornment. This interview marked the third time I sat down with The Rose (mostly because we always have constructive conversations about beauty that I can’t help but have every time they’re in town), and I have to admit that seeing bold hair colours and unconventional makeup become increasingly more integrated in the way they present themselves as a band has been incredibly fun to watch. 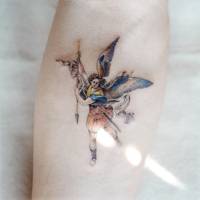 I should note that all of Woosung’s ink is permanent, though. Last time I interviewed The Rose, back in September 2018, he showed me the 1993 etching in Old English font on his back below the nape of his neck. He’s since added the archangel Michael to his right forearm (“the guy who killed the devil,” he notes matter-of-factly). Back in June, he stopped by studiobysol, one of the largest and prominent tattoo studios in Seoul, to get it done by its owner, Sol.

“I liked his colors,” Woosung notes. His tattoo count is now at six – for now. “I want so many more tattoos,” Woosung reveals, “but right now, I’m kind of holding back.”

When I need to make a big decision, I like to get a big tattoo and think about it there.

For Woosung, tattoos are more than a daring aesthetic choice. They mark different steps in his music career, and the tattooing process gives him time to reflect on where he’s come from and where he wants to go. Although he admits he fell asleep while getting a couple of them, Woosung likes to take the time sitting still for a good three hours to “think about all the things I need to think about and want to think about, and I kind of get my mind set through that,” he says. “When I need to make a big decision, I like to get a big tattoo and think about it there. It’s like when I’m on the airplane, I write songs better.”

The other members haven’t gone under the needle themselves just yet, but Hajoon says he “really” wants one. Dajoon already has something in mind, too. He stresses that he’s thought a lot about it. “A rose here on this finger,” he tells me, pointing to the inside of his left ring finger. “When you get a chord with guitar, you can see the tattoo.”

At this point, Woosung notices I, too, have a rose tattoo. (He has one below his left collarbone.) I clarify that the one on my left forearm is for my grandma, not the band, I swear. We also realized we both use the same toner – the Dr. Jart Ceramidin Toner – which I feel inclined to mention since it won a Best of Beauty Award this year. 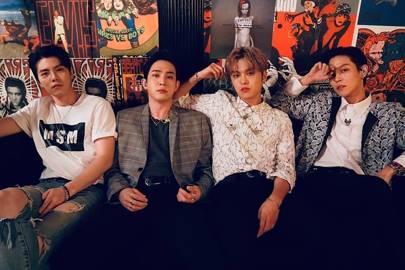 At the show the night before at New York City’s The Town Hall, I saw someone in the second row who recreated Woosung’s makeup from The Rose’s “Red” music video. The fan had pink eye shadow on their lids and holographic star stickers and red spelled out on their cheeks with red liner just as Woosung did. When I recall this sighting for him, he’s flattered that someone was inspired enough by the look to come to the show like that. Woosung enjoyed trying out the playful makeup himself. “It really went well with the theme we were trying to go for,” he explains. “It was for a dark, night scene, and when the camera caught me, it was glittering.” 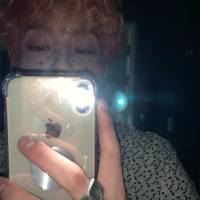 Switching up his makeup for the music video also gave him a chance to explore the expressive nature of makeup, beyond smoky eyes and berry lip tint. “It’s so cool that you can do so many things on your face and your vibe will be different every time,” he shares. “I think that’s the fun part of it. You can do pink eye makeup or black eyeshadow, and it will totally change your appearance.”

This transformative quality of makeup comes especially in handy as a musician. Depending on the makeup he has on, Woosung takes on different forms of confidence. “If I wanted to look really strong and scary, I can do that and I could probably sing that way as well.”

Since the interview, Woosung has gotten into the world of nail art with a big, yellow smiley face on a red base, so we have something to chat about next time. What else is next for The Rose’s beauty experimentation? Unclear, but Jaehyeong did mention wanting to dye his hair platinum blonde and get into glitter…

Can the cold become a weapon in the struggle for harmony and beauty?