A Texas woman was prepared for the worst when she was called to the principal’s office of her daughter’s high school recently – but when she found out why she was actually there, the mom broke out in a celebratory dance, and even twerked, in a video that’s gone viral.

Administrators at South Grand Prairie Early College High School told LaJuana McCree she needed to come to the school right away regarding her daughter, 18-year-old Promise, a senior at the school. When she arrived at the principal’s office, McCree marched straight to the front desk wearing a pair of large sunglasses and a stern expression.

“I was ready for war. That’s it,” she told WXIA-TV. “I thought Promise had gotten into some serious trouble. I had to compose myself, but I was firm and I had that look on my face like, ‘What did you do?’”

What Promise had done, though, had nothing to do with punishment or detention.

“Before we talk about that, there’s something else that we need to talk about,” a person in the background can be heard telling the concerned mom. “It happened today, and I’m going to let Promise tell you what happened.” 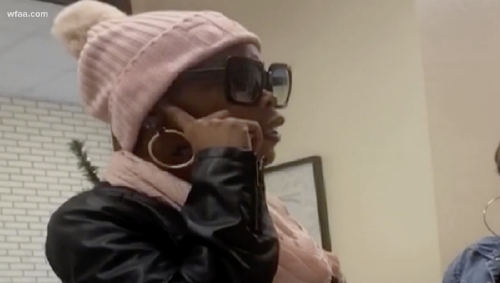 LaJuana McCree expected bad news when she was called to the principal’s office. (Photo: Via WFAA)

Then, trying desperately to contain her smile, Promise delivered the news: “I got accepted into Grambling!” – referring to her acceptance into Louisiana’s Grambling State University back in December, which she’d successfully kept a secret. The news made Promise, the youngest of three sisters, the first person in the family to be accepted into a university.

Needless to say, McCree could barely contain her excitement. First came the scream, then came the dance moves – which she had no idea were being secretly filmed.

“Yeah, I did a dance. It’s called a twerk,” she told WXIA-TV of her principal’s office antics. “That’s a proper response for her being accepted.”

“I told her and her face just lit up,” Promise said of the moment that made everyone in the office burst out laughing. “I didn’t know what to say. I was just speechless.”

Promise already has a leg up, too. Her school takes multiple dual-credit courses, so by the time she graduates at the end of the year, she’ll already have an associate’s degree. She’s a member of the high school’s first graduating class, to boot.

“She just instills in me to be humble, and to achieve to the best of my ability,” McCree told WXIA-TV. “I’m just in awe of the woman she’s becoming, I’m very excited, and I’m ecstatic that she’s happy.”

She also told the Fort Worth Star-Telegram that her daughter “is a true gift from God to me … a mentor to her younger cousins and is very family-oriented. She always wanted to watch the Discovery Channel as a kid, and find out about planets and science, so I had to find out about those things, too, because she was so inquisitive, always had all these questions.”

Representatives from the Dallas-area school district, Grand Prairie ISD, are elated too.

“Promise’s four years of hard work, her mom’s undying support, and the dedication of her teachers have all led to one dance-worthy moment,” a spokesperson for the district told the news station. “It’s not often you see a parent happy to be called to the principal’s office.”

Shay Mitchel,l on the mental health costs, of ‘living your best life’

The brilliant laundry, egg that washes your clothes for $10 per year, without detergent