Facing a new period in her life, Nell sits down to reveal her plans for the future and why a show based on a formidable sisterhood allowed her to find her voice…

That was until (PLOT SPOILER) the Victorian plague of cholera stole her from our screens and her on-screen husband – the palace chef who was as dishy as his dishes, Francatelli, and who Skerrett recently wed.

That’s hard to do that especially in light of this being set in Victorian times when it’s very stiff upper lip, emotions are repressed, and people don’t really say what they mean. Women are very constrained physically, literally, socially and culturally. There’s a lot of demand on being able to emote. Giving these characters a four-dimensional quality was down to the writer, Daisy Goodwin, who has given me some really wonderful conflicts for Skerrett to go through that really shows her humanity.

Skerrett is such a modern character in many ways. It really helped me that she was a woman who wants to work, wants to be independent and isn’t just for a happy ending tied up in a bow. The complexity and tenderness of her relationship with Victoria is another way I found I could relate to her and get into her. It’s that really fundamental female friendship of trust and intimacy. That humanised her for me.

Sisterhood is a massive part of the show. Our captain of the show is Daisy Goodwin who’s written it all, so it’s written by a woman and we’ve had lots of brilliant female directors. Then obviously I’m working with Jenna Coleman who is one of the most generous actors I’ve ever worked with. She’s so incredibly reserved. She keeps things bubbling below the surface in a way that if you’re in a scene with her, you can really feel it. It’s been so wonderful having this great crew of women around telling these stories.

It’s always a good refresher to look at how far women have come. The show is a very feminist show in lots of ways. Queen Victoria was until very recently the longest-serving monarch of British history and she’s an incredible figure to make a show about. Skerrett is such a feminist character but we are in Victorian times. It’s made me look at how far things have come but also where we have to go.

When you compare the similarities and differences of that time with our times, you realise certain things haven’t changed. Even if the laws were different, people’s attitudes might still be stuck in that time. It’s made me examine the context of where we are now.

Regardless of whether the team I am working with is heavily male or female, we’re only moving forwards to a place where everybody feels like they have a voice and can be heard. Everyone deserves that space. It’s just time. When I graduated from drama school, I was very timid about piping up and saying, ‘can we try it like this?’ Or, ‘can I have another go?’ It’s just a matter of practicing, doing it more and more. My confidence has built from working.

The show of Victoria has been a really incredible safe space. You see guest actors coming in and feeling safe and welcome straight away. I’m so grateful for people who have trailblazed the way for everyone else.

I had a terrible experience! Sometimes you get a costume that someone has worn before you and whoever that person was had body odour. You don’t notice it when you first try it on, at room temperature.

Then after an hour or two under set lights, it gets quite hot, the material begins to warm up and it starts to smell. There’s something so disgusting about being in someone else’s BO. In the second series – bless the poor costume department – every day I was asking for it to be washed again.

It just wouldn’t go! Sadly, there wasn’t time to make me an entire new dress. I would meet new actors and characters who come onto the show and be like just so you know that smell is not me. That wasn’t much fun. 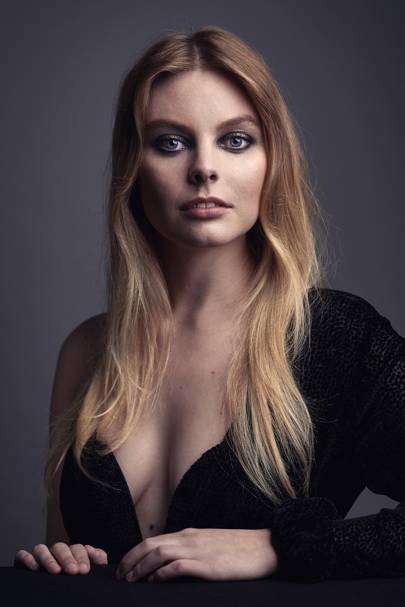 “The makeup and costume process is LONG…”

Makeup and hair for Skerrett is a very make-up/no-makeup look. Her hair is in a typical low Victorian bun, but it still took about an hour and a half for hair and makeup. Getting dressed was quicker – I got very good at getting dressed. I could do up my own corset and do all my hooks up the back of my costume.

I got skills! Everyone always asks, because Skerrett was originally the Queen’s hairdresser, if I was good at doing hair. But we have to fake of all of that because Jenna’s hair is so ornately done by the hair department before the scene even begins. I’m barely allowed to touch or change anything!

“The World Cup really helped pass the time on set…”

Oh my god I was obsessed. I was gripped! It really took me over as we were filming my final season last summer.