People often say that individuals – especially those in the public eye – have achieved more than their years would suggest. But no one deserves that label more than Yara Shahidi.

At just nineteen years old, she’s risen to fame in the hit comedy, Black-ish before launching her own spin-off show, Grown-ish. With her 3.9million Instagram followers and counting, she has not only been able to use her platform for change but Yara has been able to create new conversations.

From tackling gun crime to encouraging young people to vote with her initiative, eighteen x 18 – a stand-alone platform that seeks to uplift a new generation of voters to speak their truth and ensure their voices are heard – Yara is using her young voice for the better. Now, as she stars in The Sun Is Also a Star, playing the role of Natasha, a tenacious teenager who over the course of 24 hours seeks to stop her family being deported back to Jamaica – she brings to light another conversation in the form of the charged issue of immigration. This is an issue close to Yara’s heart given that as she is half Iranian, Yara’s family would now be on the banned immigration list in USA.

Here, Yara opens up about the obstacles she has had to overcome in order to have an empowered voice. From everyday racism to her changing relationship with beauty and hair, Yara’s story gives us hope for the future but makes us fully aware of the issues we still have to overcome… 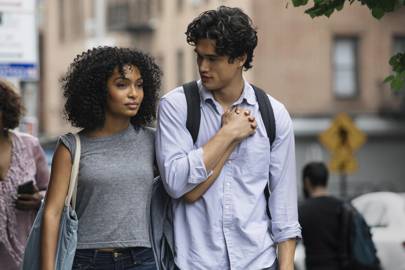 Natasha not only tries to save her family from deportation she also manages to pick up a lad en route. How does she do it all?

She’s quite the multitasker! What’s really beautiful is that Nicola Yoon who wrote the book does a really great job of having all these storylines in one without ever trivialising one over the other. Because we’re talking about immigration and deportation, it was really important to us that it never felt like an aside to a love story and at the same time, the importance and presence of love in this movie is really important.

The one thing I realise in Natasha is that initially, it seems like she’s so adverse to falling in love, especially this irrational idea of falling in love in a day. Once thing Charles (Melton) pointed out – that I realised through the course of the film – is that she is irrational, and she does have a deep love that’s never been romantic.

The Sun Is Also a Star ultimately deals with how we ‘other’ people. Can you remember a time when you felt segregated against?

There are micro aggressions on a daily basis. There are reminders of not being in the mainstream. It’s interesting and one thing that made me really relate to the novel and movie is this idea of I know what it’s like to come from a country or have family from a country that is in the travel ban list. I can’t claim the particularities of Natasha’s story but there are so many moments whether it’s my hair, comments on people preferring it straight, whether it’s comments on Iran, blackness and what people expect of a black human. There are those reminders that I experience on a daily basis.

A reminder that motivates me is knowing I’ve gone through the worst of it and knowing there’s people who have to endure so much more on a regular basis, and I’ve been protected by people who intentionally put me in an inclusive environment. If I’m dealing with things that make me process my sanity, I can only imagine what that’s like in any amplified setting. That’s what’s made me so motivated to speak out for myself and my entire community.

What struggles have you had to overcome to have your own voice?

Coming from a household where I’ve always been asked for my opinion, I don’t know how many young children are asked for their views about the world at such a young age so in that regard, I was really prepared. The one thing I’ve realised being a teenager going into a proper young adult is that I’m much more comfortable talking about politics than I am standing up for myself. There are those moments in which, while I feel completely confident standing up for others, there’s some trepidation when it comes down to what I personally want or need.

There are those moments of not feeling as confident as people initially think. My other passion for helping people gain equity is what motivates me but then so many times I’m like maybe it’s not that big of a deal. That’s something I’m actively working on. I don’t know if you can really, truly advocate for others if you don’t have the ability to advocate for yourself especially being in a position knowing fortunately for the most part except for minute instances, I’m safe and cared for. Being that is encouraging me to stand up especially when my safety isn’t at risk because there’s so many people who can’t advocate for themselves because there wellbeing and family is at risk.

How does the discrimination make you feel?

For a moment, there’s a moment of, ‘am I going crazy right now? I must have read this the wrong way.’ But more than anything, I think it’s motivating. I can contextualise it if I am in the safety of where I’m located in the world. Feeling as though this is undermining my ability to manoeuvre, what people think of me, their willingness to invest in me, it is motivating because I’m like I can only imagine the barriers everyone else faces. If something so minute can have such a drastic difference in my life, then something much bigger is preventing entire communities from opportunities. We know that to be historically true but on a personal level, experiencing it contextualises everything.

What are the things you have to deal with on a daily basis?

I was talking about this on a panel recently. Naomi Wadler is an incredible young activist who spoke about how young brown girls who are forgotten especially in conversations on gun violence. We were on stage together and the thing she brought up the adultification of young women especially young women of colour. There are moments in my life, for example when I was talking to an editor of a magazine and this magazine was supposed to represent women in Hollywood. It was really important to me that there was diversity in who they chose to celebrate.

We reached out making sure they were considering it and they were like, ‘of course!’ I show up and the three actresses who are there, who are wonderful people by the way, look like triplets. But they had chosen the most homogeneous group possible. I have nothing against them as individuals as they are talented actresses worthy of their position. As a magazine, they genuinely felt nothing was wrong. We bring it up right away and the issue I was having was that it would be unfair to the communities that I’m from for me to be the sole representative.

I know my experience is not everyone’s experience and it becomes reductive if I’m the only person there to represent ‘the other.’ I chose to opt out of the round table and the editor of the magazine comes up to me and asks why as though I am an adult, but the issue is, she isn’t hearing my response and or expecting it. So, it’s a situation of, ‘you want to have this conversation like an adult, but you aren’t giving me the respect to hear my response on why I don’t want to participate.’

It’s really important to me because I do recognise it’s a particular privilege having this platform and being given opportunities where I get to do work, I absolutely love. It’s important I use this platform to advocate for my community but for my generation at large. Gen Z take out more identity categories than previous generations which means it’s extremely important to advocate for the intersections. I’m constantly educating myself about things that weren’t in my peripheral like what it means to have a disability and how you discuss it respectively or people with different sexual identities. At the same time, how do you hand over the mic to others, too.

How has your relationship with beauty changed?

I go back to being so lucky. I didn’t watch much TV or movies growing up, my parents were very selective and intentional about what was placed in front of me – there’s implications to only seeing Cinderella. Because of that, I’ve always developed my idea of beauty around what my family represented which meant I grew up with a deep sense of belonging. I always had a global sense of beauty. There were still things I had to work through. It wasn’t until when I was 14 and jobs started requesting my hair straight and hearing random things like, ‘I like this so much better!’ I was on my schools’ debates team and the whole team were women of colour and here we are with completely different hair textures and ethnicities and yet we’re all straightening our hair before the debate because we thought it was more professional than the hair we’re born with.

That’s what we were told and what we assumed. Even starting Black-ish, it’s a very supportive environment but to be 13 years old and have makeup on for HD cameras. There was a moment in time of not caring if I had lip gloss to feeling like it’s what I needed to look ready so I had to undo, reprocess and start over and I’m grateful for that because I’m at a comfortable place now where I feel free to explore.

I’m in an industry where I spend a lot of time looking at myself. It breeds unintentional self-centric behaviour and it’s always something to undo. There are symptoms to staring at yourself in the mirror or seeing articles about whether people did or didn’t like your face, hair style or outfit. I work through those on a daily basis, but I have a much stronger foundation. We’re in a much better time where we’re seeing people be more intentional representing blackness and knowing it’s not monolithic. I am not the sole representative. We span so many different shades and beautiful identities, cultures and experiences and it’s been really special to see new representations of beauty. It serves as a re-education to some.

According to a Makeup Artist