One person has died and two have been hospitalized in an outbreak of Legionnaire’s disease in New York City, health officials have said.

The three cases of the severe form of pneumonia were linked to three connected buildings in the Bronx neighborhood and occurred in the last year, according to a report from the New York City Health Department.

The disease cannot be spread from person-to-person and is typically spread by breathing in water vapor with legionella bacteria growing in plumbing systems.

The 43,000 residents of the buildings known as Co-Op City have been warned to avoid showering until an investigation is completed, which could take more than a week. 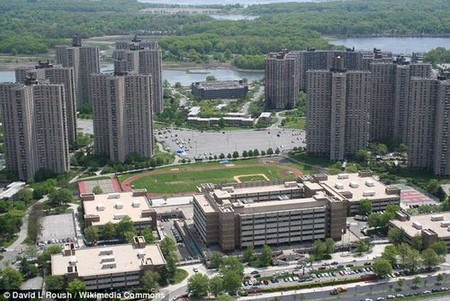 Legionella bacteria is commonly found in lakes and rivers and is harmless in low numbers.

But if it gets into artificial water supplies such as cooling towers and large air conditioning units, the bacteria can multiply and spread through the air.

Although contracting Legionnaire’s is rare, there has been a 450 percent increase of cases in the past two decades, according to a 2017 CDC report.

Nationwide there are about 6,000 cases of the disease reported each year.

Flu-like symptoms including fever, fatigue and muscle ache typically appear between two and 10 days of inhaling the legionella bacteria.

In most cases, the lung infection can be cured with a course of antibiotics.

However, in vulnerable populations such as the elderly or people with compromised immune systems, it can cause life-threatening complications including organ failure and septic shock.

According to the health department report, all three of the people who contracted the disease in the Bronx had underlying conditions that made them more susceptible to the infection.

The unidentified deceased person was described as ‘very elderly’.

The other two people have been released from the hospital.

‘As part of the protocol to assess potential sources of Legionnaires’ disease, the Health Department will be sampling the internal plumbing of the building. The building complex involved does not have a cooling tower,’ the department said in a statement.

Last summer several cases of the disease were reported across the country, including four that were traced back to a Florida gym and two at a Las Vegas hotel.

In June one person died and six others were sickened by the bacteria in Manhattan.

Later in November another 12 cases were reported in another Co-Op City in Queens, where the bacteria was found in a cooling tower.