Based on the Saoirse Ronan film of the same name, Hanna explores the extraordinary skills of a girl who was raised in the woods by her father to evade being captured by a rogue CIA agent.

In between murdering villains, Hanna navigates a journey of self-discovery to unlock who she actually is. Think Killing Eve, but more earthy.

The word ‘kickass’ is bandied around all too much of late. But Esme Creed-Miles, who takes on the role of top-notch teen assassin, Hanna, in Amazon Prime’ new series, defines the term.

Hanna would meet her IRL match in Esme Creed-Miles. At 19 years old, the daughter of actress Samantha Morton talks through her intense AF Hanna training, why feminism needs to readdress the queer experience, and how she hopes Hanna will teach us to, “unlearn the male gaze,” through her complete abandonment of femininity…

“I auditioned for Hanna never thinking I would get the part!”

My agent sent me the slides to audition for it. I’d seen the film and was a fan of it, so I auditioned never thinking I’d get it! It wasn’t until I was confirmed for the part that I got to read the script. I was surprised at how much of a coming of age story it is rather than an action series. It is an action series, but it will surprise people of how much a drama it is, too. It’s got a lot of theatrical elements. It explores characters in a lot of depths.

“I’m completely disillusioned by the concept of femininity.”

I believe in assigned sex but not necessarily gender. Gender is a learned construct that is detrimental to both sexes. I don’t really embrace femininity. I embrace being able to absorb myself in gender and Hanna is someone whose grown up completely un-doctrinated by the male gaze.

Hanna hasn’t internalised male gaze but as a person in the 21st century I do very much feel like I’m constantly unpacking a lot of internalised misogyny that exists everywhere. 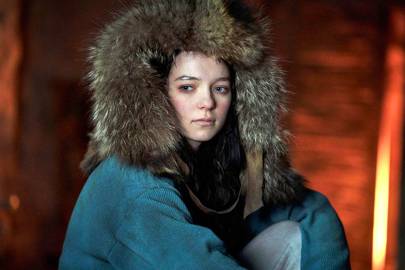 There is a lot of literature and artists especially who are navigating some of these topics really fantastically, so I wanted to bring some of that into my character. I don’t know if you’re familiar with writers like Maggie Wilson or Amy Miles – they are non-binary, queer artists who are really fascinating to me in the way they discuss gender.

“People are starting to realise privileged white feminism isn’t cutting it. We have to look at the experience of all women!”

I personally feel like the conversation around feminism has advanced a lot. People are starting to realise privileged white feminism isn’t cutting it. We have to look at the holistic experience of all women, or assigned women, on the planet. The conversation has to adapt and evolve. It’s been so psychologically detrimental how our conventions have basically been established by a white man. I can be certainly more open about who I am and who I want to love, I’m so lucky. I shouldn’t have to feel lucky, it’s damn right but I know it is not the case for everyone in the world.

“I deal with internalised sexism every day.”

Sexism, for me, is internalised. I constantly observe myself. I have a dichotomy of self which is an inherent female condition that John Berger writes about really well and also Simone De Beauvoir who wrote The Second Sex. These are both things everyone should read. Women are taught to be seen and then are taught to act and I don’t think that’s something that we can lie about anymore. It’s something we need to unlearn. What’s amazing about the show is you get this sense of completely unfiltered humanness.

Hanna brings us back to the animalistic roots of hunting, survival and running and just being in your body. She’s very uninhibited in what she says, what she thinks and how she feels because she hasn’t been taught otherwise and that’s contagious when you see it on screen, especially when you juxtapose that with a character like Sophie who is this young, bubbly, girly teenager. 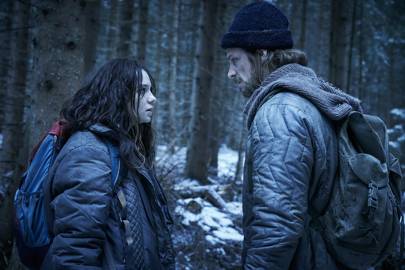 It’s interesting when you watch their relationship develop, she actually ends up learning more from Hanna than Hanna does from her in terms of who they both want to be and who they feel they are in the inside. That’s really awesome and it’s a great opportunity to discuss stuff like that in the show. When I was coming to David Farr, the writers and especially Sarah Dean Smith who directed the first two episodes with some of these thoughts I had about gender and character and exploring it, they were very receptive. I don’t think that would necessarily have been the case a few years ago.

“The feminist agenda needs to encompass the queer experience, too!”

I feel that sometimes the feminist language can be slightly on the nose and it almost patronises its subjects in how it deals with feminist agenda. Actually, the feminist agenda has to advance itself, it has to be more encompassing of everyone’s experience and the queer experience. At points when I was on my own feminist journey and discovering what it meant to me to be a feminist it was a case of: ‘does this necessarily adhere to my own disillusionments because I have been disillusioned by gender completely.’

I’m not saying I’m non-binary, I’m in a dress right now but I can assure you it’s a rarity. I find it very hard to embrace my femininity.

When I started reading some of these queer writers, artists and thinkers, I really was like, ‘wow this makes sense to me.’ It’s really awesome being able to integrate that into my own performance, or I try to at least.

“I am having more open conversations about sexuality and gender.”

I have read a lot about the nature of the female condition and the pain we’re assigned from birth. That led to more open conversations about sexuality and gender. Initially I felt like that’s silly but actually when I read about people properly explaining what that meant, it made a whole lot of sense. Look at how gender operates in the male experience and how it encourages this kind of insane aggression and disillusionment and this bizarre sexual tension that is completely unspoken.

I think it’s getting worse. The way I feel seen by the opposite sex is sometimes really detrimental to me. I’m very aware of how I’m constantly being sexualised and objectified in their eyes which makes me feel worthless.

You end up internalising that and it really damages your self-esteem, your confidence and your liberty because you feel constantly beholden to play into your own sexuality and not to have a feeling of self-worth. Then in turn when that isn’t met, or those standards aren’t communicated efficiently, then men become can become aggressive.

“Through playing Hanna, I have learnt to ACTUALLY run and punch.”

Through playing Hanna I’ve learnt I can run and punch. I never thought I’d be good at fighting or just be good at feeling my physicality. Genetically I’m not as strong as a man because it’s not biologically how I’m built but actually I can defy that through the character and that’s really fun and liberating.

“The training was so intense. I honestly couldn’t walk up this flight of stairs before!”

It lasted for two months, six hour a day of fighting, boxing, weight lifting, cardio, stretching, yoga – everything! I honestly couldn’t walk up this flight of stairs before. I was the most unfit person. My friends were cackling! I was also this very lanky, lazy person.

“I accidentally knocked a guy’s teeth out in training.”

Stunt men are very macho, and they don’t want to be seen that they’re hurt. If you accidentally punch a stunt dude because he doesn’t get out the way quick enough, he will not show any of the other stunt dudes that he can’t take it. We were choreographing it on the day, and it was a scene at a train station. I had to get this suitcase and fling it at this guy trying to catch me and I was like, ‘do we not have any polyester suitcases, something that’s fake because what if I hit this guy on the face with a suitcase?’

And they were like, ‘no it’s fine, that’s his responsibility to get out the way!’ They bring in this stunt guy, we do this scene, I pick up the suitcase and throw it at him and I hit him in the face. They called cut and he was like, ‘I’m fine.’ In the next scene he smiles at me and I was like, ‘where the fuck are his teeth.’

Fact: holiday romantic comedies are the best kind of rom-coms

How we turned our festival glitter obsession into a booming business

Maya Jama on diversity in beauty, hustling for her career dreams and still having imposter syndrome