But to get us started, we asked leading dermatologists and skin professionals to uncover what exactly moles are, how to take care of them and when to seek help.

When it comes to our skin, it’s better to be safe than sorry. And while, most of the time, our moles are nothing to worry about, occasionally they can be the first sign that something more concerning is happening in our skin. Melanoma (or skin cancer) typically shows up first as a mole, which is why vigilance is key.

So, whether you’ve had a new mole pop up or an old one is acting a little funky, this is everything you need to know.

“Normal moles are common small brown spots or growths on the skin that appear in the first few decades of life in most people,” says Natalie Masters, Boots Pharmacist. “They can be either flat or elevated and are generally round and regularly shaped. Many are caused by sun exposure,” she adds. 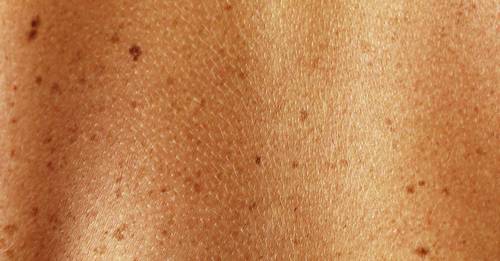 Who typically gets moles and who’s at a higher risk of developing cancerous moles?

“Most people have moles and they are usually nothing to worry about. It’s normal for babies to be born with moles, for new moles to appear (especially in children in teenagers) and for moles to fade and disappear as you get older,” says Natalie. “Further moles that develop in adulthood tend to follow sun exposure,” adds Dr Catherine.

“Certain things can increase your chances of developing melanoma, such as having lots of moles or freckles, pale skin that burns easily, red or blonde hair or a close family member who’s had a melanoma,” explains Natalie.

Why do moles become cancerous?

“One of the most common causes of melanoma is exposure to too much ultraviolet light from the sun or artificial sources of ultraviolet light, such as tanning beds. Other risk factors can include skin type, sunburn, number of moles on the body, family history and medication such as immunosuppressants,” says Natalie.

“In around a third of cases melanoma can occur on the skin from a pre-existing mole, but it is actually more likely to present as a completely new lesion on the skin. Understanding the steps that occur within a normal mole to turn it cancerous has been critical in allowing us to develop treatments for melanoma,” says Dr Catherine. “We know that a complex series of ‘mutations’ need to occur within the DNA of the melanocyte, making the cell behave inappropriately and evade the daily ‘immune surveillance’ that removes pre-cancerous cells from your body.”

How can we prevent cancerous moles?

“Melanoma isn’t always preventable,” says Natalie, “but you can reduce your chances of developing it by avoiding getting sun damage. You can help protect yourself from sun damage by using sun cream and dressing sensibly in the sun (by wearing hats, sunglasses and covering up with clothing). Sunbeds and sun lamps should be avoided,” she adds. Also, it’s important to regularly check your skin, which you can either do at home, or with the help of a dermatologist.

How should we look after/check our moles and how often?

“Try to check your skin regularly. I always recommend patients look at their skin after a shower in a long mirror every 3 months,” says Dr Catherine. “Assess the front and back of your body (as best you can), and then focus on hidden places such as hands and feet and finger and toe webs.”

If you’re struggling, “ask a friend or partner to check those hard to reach places such as the back. If anything looks at all unusual, don’t hesitate to visit your GP or book in a scan.

Are there any areas we should pay particular attention to? Where are cancerous moles most commonly found?

How should we be checking our moles?

“Remember that melanoma is often not sore or itchy, so if you are not looking you simply don’t notice it,” says Dr Catherine. “I recommend patients focus on the first lesion your eye is drawn to when checking your skin, as it will stand out as being different from the other moles on your body. You can then focus on these lesions with a more detailed approach.”

“Use the ABCDE method (listed below) at home to monitor your moles”, agrees Dr Susan Mayou, Consultant Dermatologist at the Cadogan Clinic.

A – Asymmetry: Where one half of the mole does not match the other

B – Border: Check the outline of your mole – a melanoma may have edges that are ragged, notched, blurred or irregular, plus the pigment may have spread into surrounding skin.

C – Colour: Is the colour uneven? You might see shades of black, brown and tan, or areas of white, grey, red, pink or blue

D – Diameter: Do you see a change in the size of your mole? Has it increased? Typically, melanomas are at least 6mm in diameter (which is the same size as the end of a pencil)

E – Evolving: Does the mole look different from the others and / or is changing in size, colour or shape?

“Also remember that a melanoma does not always fit the ABCDE rule, if you notice anything different, or if there is a new skin lesion, if it itches, bleeds or if you are worried about it, seek medical help,” adds Dr Susan.

What sort of help should we seek and what happens during treatment?

“Book an appointment with your GP, who if needed, will refer you to a specialist, or look into alternative services,” says Natalie.

Selected Boots stores offer a Mole Scanning Service (from £35), run by Screen Cancer UK, which is available across the country, while the Cadogan Clinic (from £250) can provide Londoners with a comprehensive mole check with a dermatologist as well as more expert options such as mole mapping and on the spot mole removal.

In both the mole will be reviewed by an expert who will advise the next steps. “If a mole is felt to be worrying it will need to be surgically removed so a more detailed assessment can be carried out,” says Dr Catherine. “This histological analysis remains the gold standard to diagnose melanoma or changes within the mole. Remember that detection of melanoma early with surgical removal can be curative.”

Is it safe to remove a mole for aesthetic reasons?

“There may be moles you don’t like the look of or moles that become inflamed after rubbing on clothing. It is safe to remove these lesions for aesthetic reasons,” says Dr Catherine. However, “they are not removed for cosmetic reasons on the NHS. If you want to remove a mole for cosmetic reasons, this would need to be done privately,” says Natalie.

What are the ways in which they can be removed?

“Moles can be surgically excised –where the mole is cut out of the skin and the skin is repaired with stitches leaving a scar in its place. If a mole is raised options include a ‘shave excision’ – which only removes the top section of the mole, leaving mole cells under the surface of the skin. It is important that any moles removed are histologically reviewed to confirm diagnosis,” says Dr Catherine. “If the mole is small, it may be removed by laser which helps to break down the pigment in the skin,” adds Natalie.

A guide to your moles: What are the different types?

“Some moles may be present from birth and we call these congenital naevi [or, birthmarks],” says Dr Catherine. Other common moles include

“Junctional naevus: these are flat moles with dark uniform pigment. The naevus cells [large pigment cells] sit at the junction of the epidermis [surface layer of skin] and dermis [the thick layer of skin directly beneath the epidermis].

Dermal naevus: the naevus cells sit in the dermis creating a raised domed mole often with a light brown or pink colour.

Compound naevus: the naevus cells sit in the dermis but also the dermo-epidermal junction creating a raised pigmented lesion.

Combined naevus: these have a mixed pattern of two different moles in one lesion.

Blue naevus: “the naevus cells sit deep in the dermis creating a blue tint to the pigmentation seen on the skin,” explains Dr Cathering.

As for cancerous moles, these include:

“Basal Cell Carcinomas: also known as BCC, these are a non-malignant low-grade skin cancer. They usually appear as small, shiny pink or pearly-white lumps with a translucent or waxy appearance,” explains Natalie. “They can also look like a red, scaly patch. The lump slowly gets bigger and may become crusty, bleed or develop into a painless ulcer. They do not usually spread and normally remain localised, tending to grow slowly and ulcerate.
Basal Cell Carcinomas can be flat, superficial or nodular, scaly and pigmented.

Squamous Cell Carcinomas: these are also a non-malignant skin cancer. They tend to be nodular, non-healing lesions and can also ulcerate. They can grow very quickly, become aggressive and on rare occasions spread around the body.

Malignant melanomas: these are the most serious form of skin cancer. Melanomas can have irregular borders, be asymmetrical, bleed, itch and have irregular pigmentations. They can be nodular, flat, raised, superficial and/or deep,” adds Natalie.

Nightingale Hospital and this is what you REALLY need to know