Nicole Kidman is no stranger to the mystery/psychological thriller genre: she also starred in The Undoing, which aired earlier this year.

And that’s not to forget some of her most famous film roles, in 1999 mystery/drama Eyes Wide Shut, and horror/thriller The Others.

We’d also possibly see the return of season 1 cast members such as Melissa McCarthy as Frances, Samara Weaving as influencer Jessica and Bobby Cannavale as Tony.

Or else, we’d see a different line-up of resort guests altogether. Names that may crop up include those who have collaborated with Kidman or Kelly in the past. 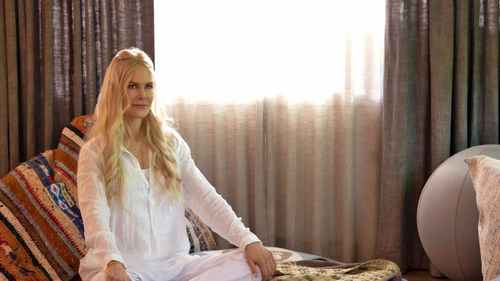 Then again, perhaps Kelly’s wife Michelle Pfeiffer – no stranger to the genre herself (she starred in 2000 psycho-thriller flick What Lies Beneath) might make an appearance among Masha’s unwitting clientele.

[Warning: this section contains spoilers for the season 1 action!]

The first season of Nine Perfect Strangers was based on Liane Moriarty’s novel – which doesn’t have a sequel.

That means we’re in the dark when it comes to the plot of a future season – that’s all in the hands of David Kelly, who would no doubt be writing it (as he did for Big Little Lies season 2).

A future season might see Masha welcoming back new guests to Tranquilium House, after she escaped arrest in season one. Given that Ben and Jessica appear to work at the spa by the end of the first season, it may be that they are on hand to facilitate the action too.

As we have no confirmation on whether or not a Nine Perfect Strangers follow-up is on the horizon, a potential season 2 release date is anyone’s guess.

Even if a second series does get commissioned, it might be a while before we see the cast back on-screen. We know the first season, filmed in Australia from August to December 2020, took a full five months to shoot.

If the cast could coordinate their schedules to make season two a reality, it could be out in the first half of 2023 at the earliest (so don’t organise your viewing party, just yet).

Feeling bereft, with no more Nine Perfect Strangers to watch? Time to fill that void: we have a couple of alternative shows for you…

To some, the premise of a luxury resort full of stressed out strangers, with sinister goings-on and a mystery to solve might ring a bell.

The season shares themes with the wildly popular The White Lotus, which also came out this summer. If anyone’s looking to fill a Nine Perfect Strangers sized gap while we await news of a potential season two, it comes highly recommended.

Katy Perry, relatable queen, showed off the Spanx she wore to a recent photoshoot in this incredible video