A statue of Dr James Marion Sims, the ‘father of gynecology’ who experimented on black women without anesthesia, has been removed from New York’s Central Park.

However, activists who have campaigned for years to take down the statue said it was a ‘slap in the face’ to relocate the 14-foot bronze figure to Sims’ grave in Brooklyn instead of destroying it – and the pedestal embellished with his name is still there.

Sims has to this day been held up as a pioneer in the field of women’s health, with statues in New York, Pennsylvania and his home state of South Carolina, despite performing brutal operations on slave women without pain relief.

Through his callous techniques, he invented the vaginal speculum, which is still used in gynecological examinations, as well as a way to fix a tear between the uterus and bladder during childbirth.

After years of protests, New York officials unanimously voted on Monday to remove the statue in Harlem after a review of the city’s monuments deemed it to be a ‘symbol of hate’.

Today at 8am, activists chanted ‘off with his head’ as a noose and hood was placed over the 14-foot bronze figure to move it to Green-Wood Cemetery in Brooklyn where Sims is buried.

Plans are under way to replace the statue with a plaque dedicated to Anarcha, Lucy, and Betsey, the three black slave women who Sims stripped and tortured to test his theories, while his white female patients were allowed painkillers beforehand.

Nonetheless, the move has sparked controversy as some insist it should be destroyed, and many question why there was no provision to get rid of the pedestal at the same time, leaving his name and history lingering in the largely Hispanic and African American neighborhood. 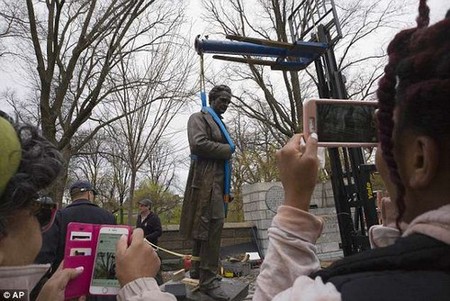 Dr James Marion Sims invented the speculum which offered the first deep look inside women for gynecologists. As a result he was commemorated in a statue in New York’s Central Park

On Tuesday, New York City removed a 14-foot statue of Dr Sims, deeming it a ‘symbol of hate’ 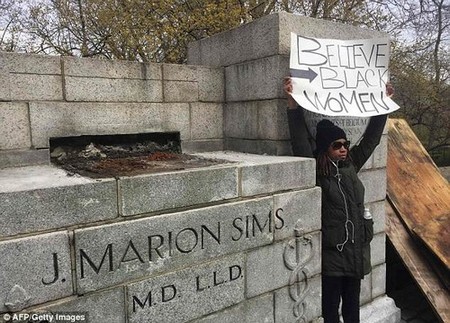 Only three of Sims’ dozen slaves are named, Betsey, Lucy and Anarcha; he operated on them without anesthesia while his white patients were medicated. Pictured: an activist at the removal on Tuesday

East Harlem Preservation, the group that spearheaded the campaign to remove the statue, said on Tuesday that as long as the statue exists, Sims is still being commemorated.

‘Dr Sims is not our hero, and we don’t need any reminders of his barbarities. We bear the pain and burden of intergenerational trauma every day,’ the group said.

‘The symbolic “move” was seen as a slap in the face by many who had for years maintained that the statue’s presence did a huge disservice to the neighborhood’s majority Black and Latino residents – groups that have historically been subjected to medical experiments without permission or regard for their wellbeing.’

Speaking to Daily Mail Online, Susan M Reverby, a medical historian who is Professor Emerita of Women’s and Gender Studies at Wellesely College and has been vocal in the campaign to alter or remove the statue, said she condemns the statue but accepts the decision to move it rather than destroy it.

‘We don’t live in Stalin-era Soviet Union where things would be destroyed,’ Reverby said.

‘I agree with the American Historical Society that there is a difference between history and memorializing. No one is denying the history of what he did, but just that we as a society have decided what we are memorializing and what we are not.’

Instead, she believes we should focus on remembering the women he hurt.

The removal, Reverby said, ‘reinforces a growing awareness over the last half century of women patients and what they put up with. They shouldn’t just be nameless faces. We should be remembering them, the women who were used and suffered.’

The Sims statue, which stood on 5th Avenue at 103rd Street, was the first ever erected for a doctor in America. It was made in 1894 and in 1934 moved to the edge of Central Park, near where Sims spent the final years of his life.

South Carolina-born Sims started his career in Montgomery, Alabama, where he was a slave owner and trained doctor. 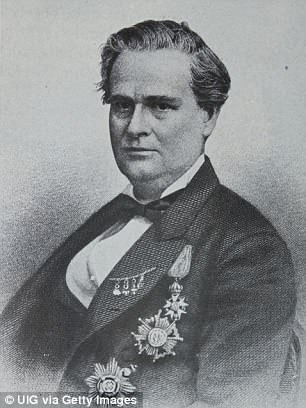 Early on in his career, he started to notice that many slave women suffered a specific kind of tear between the uterus and bladder (vesico-vaginal fistula) during childbirth, largely because of forced rape and teen pregnancy.

He decided to embark on a series of exploitative experiments that even his doctor peers in the pro-slavery south found to be too extreme.

In his autobiography, The Story Of My Life, Sims claimed women were clamoring to be operated on by him. However, there is no indication that they consented to the fiercely unethical manner in which he went about treating them.

At his hospital, in the center of the neighborhood where slaves were traded, Sims pitted himself as the go-to slave healer for all kinds of ailments.

Meanwhile, he used 12 black women (all anonymous bar Anarcha, Lucy and Betsey) as experiments to trial new surgical techniques – and to test the theory widely held among white physicians that black women did not feel pain as much as white people.

Sims proudly described his experiments: he cut Anarcha 13 times before he could achieve the results he was aiming for; Lucy, he admits, was in ‘extreme’ agony.

This all happened before 1853, when he had earned a name for himself as the ‘father of modern gynecology’ and moved to New York City to become a celebrity doctor, treating royals and A-listers who came in from all over the world.

His popularity started coming into question in the 1960s, but it was not until medical journalist Harriet Washington published Medical Apartheid: The Dark History of Medical Experimentation on Black Americans from Colonial Times to the Present in 2007 that Dr Sims’ ethics were truly scrutinized.

‘When I started out as a medical writer, most people were unaware of what Dr James Marion Sims did,’ Washington told Daily Mail Online.

‘What surprised me was that the historical accounts I was reading about him had been distorted, portraying him as the “father of gynecology”. But in his own writing he was open about what he did. He described what he did.’

And so, using Sims’ own words, Washington deconstructed his reputation – the women whose genitalia he cut repeatedly for years, the children whose skull bones he ‘rearranged’ to ‘treat’ an infectious disease, the patients he left out to pasture even if repeated operations failed.

At the time that she finally published her account, Washington was left with a strong feeling that his statue should stand where it does, a looming reminder of the horrific things he did so we never forget.

But a trip back to Germany, where she grew up, shifted her perspective.

‘In Germany, I don’t see any monuments to Hitler. Instead, I see brass markings commemorating the victims of the Holocaust,’ Washington said.

‘In our country, we commemorate the perpetrators – the Confederate statues, for example. People who did unspeakable things to other Americans just because of the color of their skin.

‘Would you erect an anti-Semitic statue in a Jewish community? No. It’s an additional slap in the face that Dr Sims’ statue was in Harlem, largely made up of Hispanic and African American women who have to walk by him every day.’

The 14-foot bronze figure will be moved to Green-Wood Cemetery in Brooklyn, where Sims is buried

The Sims statue, which stood on 5th Avenue at 103rd Street, was the first ever erected for a doctor in America

In his autobiography, The Story Of My Life, Sims claimed women were clamoring to be operated on by him. However, there is no indication that they consented to the fiercely unethical manner in which he went about treating them

Now you can get the MMR vaccine on the high street!