It’s incredibly important as an actress to feel the support of other women. Despite having no scenes together on Colette, I met Denise Gough [double Olivier Award winner] while waiting around on set.

I knew straight away she was someone who’d change my life. We then got stuck in an airport together and before I knew it, I’d booked tickets to New York to see her play, People, Places Things. Watching her, I just thought, ‘Wow, that’s the kind of actress I want to be!’

Now she’s a real friend; people like that keep your drive going and inspire you.

Women should always support other women

London-born, Yorkshire-raised Eleanor Tomlinson, 26, made her acting debut when she was 13; racking up roles in The Illusionist and teen rom-com Angus, Thongs And Perfect Snogging, before finding fame in 2015 as Demelza in Poldark. Most recently, Eleanor played Keira Knightley’s lover in Colette and later this year she’ll fend off a Martian invasion in the new TV adaptation of cult classic, War Of The Worlds, set in Edwardian London. She may love a period drama, but it seems no corset can constrict her outlook. Here, she reveals the empowering moments that have shaped her life – both on and away from the cameras.

The attention around Aidan’s naked torso was frustrating

I found the Poldark hysteria around Aidan’s torso hilarious. It was great as it meant so many people watched it, but I think the attention overshadowed the story, and as an actor, I’m all about the story. I found that quite frustrating. So going on to Colette, and working alongside Keira Knightley (she has extraordinary magnetism when she walks into a room) in a film about female empowerment and sexuality, was incredible. I’ve learnt so much about my strength as a woman by standing up for myself on set during filming, too. Unless you fight for your ten minutes, a director can shout, “We’ve got it! Let’s move on!” 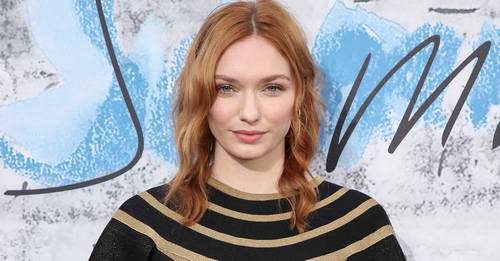 I only do nudity for the right role

I think really carefully about intimate scenes; I would only do nudity if I felt it was right for the story. When filming the sex scenes with Keira in Colette I went topless, but it wasn’t nudity for the sake of it, it was about celebrating the female body in all forms. Because of what Colette represented – a woman discovering herself, away from her husband’s control – I thought if there was ever a perfect opportunity to get naked, this was it.

When it comes to seeing my naked body on screen, I don’t believe in body shaming, so I won’t shame myself. I’m not perfect. I have my own body hang-ups, but I won’t let them take over.

Childhood bullying has empowered me as an adult

I was shy when I was growing up. The press exaggerated how badly I was bullied at school [reports emerged that she was taunted for being ‘posh’], but I’d go away for six months to work on set and then somehow have to fit back in; you never want to feel like the awkward one. In the past five years, I’ve built up my confidence – I don’t think I could be bullied now.

My parents taught me to just try my best

Both my parents are actors. They’d say to me, “Keep your feet on the ground, go to every audition and try your best.” It’s such a competitive industry and so easy to get swept up in this seemingly glamorous world – but when the job ends, you never know what’s next, which is a scary thought every time.

Poldark put me on the map as an actress and shaped my sense of self. I was 21 when I got the job and I’ll be 27 when the final series airs – that’s a huge time of personal change. I’ve grown in confidence by discovering the actor, and the person, I want to be. Fame didn’t change my actual life, though – tonight, I’ll go home, watch Netflix and have a Chinese. But I do wear a hat when I leave the house, otherwise it’s like having a massive arrow saying, “Oi! Demelza’s over here!”

I have zero time for trolls

My experience of fame has taught me that, if you are affected by negativity, you shouldn’t seek it out, although it’s easy to obsess about social media. Empowerment comes from your opinion of yourself, so I don’t seek support from people I don’t know. You get trolls, but I have zero time for it – it’s faceless bullying and those comments will never get through to me.