“At school, I was bullied by a group of students. I remember feeling helpless. School used to be a safe place. Now I was scared to go,” she proclaimed.

“I was lucky. With the help of my friends, family and people around me, I was able to overcome these negative feelings and take my power back. But millions of children aren’t so lucky. They’re still struggling in the darkness. Wrestling with fear. With insecurity.”

Unicef Goodwill Ambassador Millie Bobby Brown has opened up about the toll taken from childhood bullies. Speaking at the UN’s global summit on #WorldChildrensDay, the Stranger Things actress revealed she was scared to go to school in fear of bullies who targeted her.

Addressing the toll bullying takes on a child’s mental health, Millie said: “In the most extreme cases, and in areas around the world where conflict and violence are daily threats, it can lead to self-harm. Sickness. And even suicide.” 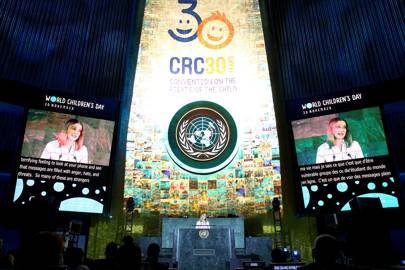 She added: “In my role as Goodwill Ambassador, I will continue talking about this issue wherever I go.”

Millie took to Instagram to discuss the ‘beautiful’ opportunity to speak at the summit writing: “Today was a dream because i joined @unicef to mark the 30th anniversary of the Convention and remind everyone *specifically world leaders* that children’s rights matter. today is #WorldChildrensDay and I am v proud to join young people all across the world to ask world leaders to stand WITH us.”

The actress and activist was speaking alongside David Beckham, who also stressed the importance of children’s rights. “As leaders, as public figures, as parents, and of course, as human beings, we must do more to protect children’s dreams. Because the future doesn’t belong to us. It belongs to children.”

The summit took place in alignment with a Global Pledge amongst UN member states promising to renew their commitment to the Convention On The Rights Of The Child and implement child rights fit for the 21st century.

We salute you for leading the way, Millie.

Trump could get banned from Twitter after 20th January