This no filter, no BS approach to life has certainly helped propel Zoey’s career and garner 1.9 million Instagram followers, who are constantly poised on the ‘like’ button, in the process.

The 24-year-old has morphed from Disney Channel star in The Suite Life on Deck to young actress to watch following roles in Vampire Academy, Why Him? opposite James Franco and Dirty Grandpa with Zac Efron and Robert DeNiro. However, 2019 is set to be the making of Zoey with a coming-of-age role in The Politician.

If you could bottle Zoey Deutch’s energy, you could – possibly – power a small city. Sashaying into our interview in a blue and white striped Prada dress to the soundtrack of Spice Girls Spice up Your Life (my choice – but Zoey-approved) proclaiming, “I ate a little lipstick and now it’s everywhere in my mouth – it tastes weird,” it’s clear Zoey is full of life and doesn’t hold back. As she quickly deep dives into her Nando’s order and her obsession with Tan from Queer Eye, it’s equally clear she’s a bit of us, too.

In the hands of American Horror story creator, Ryan Murphy, Zoey steals the show – or rather the election race – as cancer sufferer, Infinity Jackson, who is employed by power hungry student Payton as his running mate for school President. Picking up on themes of gun control, sexuality, suicide and mental health – set to the dreamy backdrop of Southern California – the new Netflix show is a modern-day Cruel Intentions, except sassier with the help of Gwyneth Paltrow and Jessica Lange. 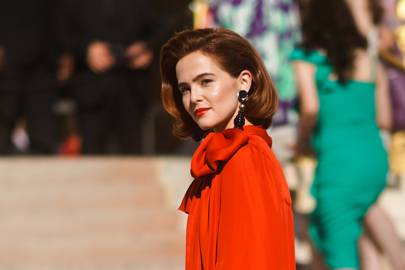 Here, on the verge of mega stardom, Zoey Deutch opens up about her quarter-life crisis, therapy, the issue that means the most to her: reproductive rights, and errr, sweating. Yes, that’s right, watch the above video – I told you she’s a bit of us with no filter…

The Politician raises a number of serious issues in a new and refreshing way. What do you think is the most game-changing issue it raises?

It’s hard to pick one but in my country, there are a lot of discussions around gun control and it’s not an easy topic to discuss. Something that’s so brilliant about this show is that it does it in a way that isn’t ‘boxy’, there is lots more subtext, so it isn’t ever ‘preachy’. Ryan and Brad (Falchuk) are so brilliant at digging deeper, they aren’t people that skim the surface, they aren’t people who are afraid of going there and the show goes there!

If you had The Politician growing up, how do you think it would have helped you as a young person?

I think one of my favourite parts of the show is how it treats identity and sexuality. One of the lead characters (Payton played by Ben Platt) likes men and women, but it’s never discussed whether he is bi or straight, or gay or whatever. What a dream it would be to live in a world that your sexuality wasn’t a political stance! It’s such an interesting time we live in.

You still have to have this big declaration about who you are in the world but what if you could just be the person you want to be and just be who you are. I think its immeasurable to know the impact of watching something like that and I do strongly believe that people coming into their sexuality and witnessing that, feeling represented and feeling like that is possible, would be huge. It would have been huge for me; I think it would have been amazing.

We always feel like outsiders and frauds and I think that’s a very human, natural thing. I wish I had advice to give on that, I’m still trying to figure it out on my own. But I think it’s all about learning to be okay with yourself but that is a very, very difficult process. We are all on our own journey of self-discovery and empowerment.

Do you feel like you are on your own journey of self-discovery, then?

Certainly! I’m about to be 25 and the whole quarter-life crisis, dread thing is real! But in regard to what you were just saying, I always think it is so important to not compare my insides to other people’s outsides. By that, I mean, if you are looking at someone and thinking they have everything you need to realise in reality they are struggling in one way or another. That is the great common denominator between every human being in the world. So, I just try and remind myself that. 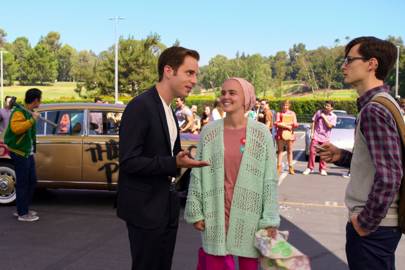 What is the quarter-life crisis like for you? How real is it?

I’m not somebody who really ‘questions.’ I wouldn’t consider myself as a typically philosophical creature. I’m more of a person who is like ‘let’s go get chicken,’ or ‘eat lipstick!’ I do get random thoughts of, ‘why are we all here?’ What does it all mean? What’s the point?’ I’m can be driving and thoughts like that will just pop in my head. But my brain registers I’m going down a really windy road, and there will be a roadblock where my mind goes, ‘you’re not smart enough, stop there!’ At least my brain stops me, but maybe this all stops at 30?

In that situation what do you tell yourself? What is your empowerment mantra when you’re feeling down?

I love something my mum told me once – I do believe some of the simplest things in life are the most profound – that, ‘you are enough, and you are really beautiful.’ I think that is really comforting and I think people need to listen to that and learn from that.

People need to learn to not be so hard on other people, too, that’s where judgement, hate and anger comes from. That also leads you to feeling sh*t about yourself and projecting yourself onto others. But also learning that you are enough is a beautiful idea. It is also good to talk, in this situation, it’s all about mental health and how the mind works. But there is so much stigma. I mean where I was brought up – I’m Jewish – and if you don’t see a therapist it’s like, ‘what is wrong with you?’ But in most parts of the world it’s the opposite.

I feel very lucky that so much about my life is always talking through it and being open about it all. I certainly have never been able to come to any conclusion about myself, in my life without talking it out, it doesn’t just come. I am unable to come to any sort of helpful or useful place without any other useful human beings guiding me, or listening to me, you just really need to talk to people and just say, ‘hey will you just listen to me? Listening is amazing, it clears so much.

Also, one of my favourite things to say when someone is being horrible about themselves is to say, ‘don’t say that about my friend!’ I always go down the rabbit hole of being mad at myself for being hard on myself. I want to learn about not being so hard myself, I think we should take advantage of that and how lucky we are. 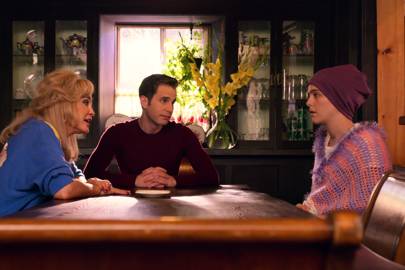 Everyone in The Politician is using their platform – quite literally – for good or for bad. How do you feel about having your own platform and how much responsibility do you feel for it?

I think right now, more than anything, I feel gratitude for the privilege of having a voice and a platform to be able to use that voice and to express how I feel about our political climate. Some people don’t have a place to do so even if they wanted too, so if anything, I feel it’s a privilege. I think I feel responsible and I do relate to the idea that when you have the privilege to speak up that silence doesn’t make you safe. Some people have a narrative that we are actors but also, we are humans and humans have feelings and opinions and I think it’s an honour to discuss how things work.

What do you think is the most pressing issue for you in today’s society?

The thing that I am most passionate about is women’s health and women’s rights, which shouldn’t be under politics. Or should we be seen in the conversation as a minority – we are 51% of the population. Lots of stuff on that front- like why are tamponstaxed? Does that make sense? Why are politicians allowed to discuss when and why we have children? It all doesn’t make sense! These things piss me off!

How much does it anger you?

Very much. But I try not to get upset about things that are upsetting. I think it’s a really good skill to talk to someone about something you disagree with, in a respectful way. I have so much respect for people who can do that as I haven’t mastered that yet.

Do you sitting here today do you feel more empowered than ever before?

I don’t know, I’m not sure, I don’t know anything! It’s hitting me – that existential crisis – who am I? Am I empowered? Where is all this coming from? But seriously I weirdly feel optimistic, and I feel oddly empowered by the fact that things have to get better. But I also feel very empowered about the community of actresses I work with; I get excited by that.

Victoria Beckham, I want to create, a beauty brand, of the that’s not tested, on animals!