Retinol, like other retinoids, helps speed up the normal skin-cell turnover process. That can help reduce the appearance of some signs of ageing as well as manage acne. For me, the main goals were to get a handle on the jawline acne that has recently come back into my life and reduce the appearance of the post-acne marks I now get after seemingly every pimple.

I’ve found my everyday sunscreen staple, tried endless double-cleanse variations, and explored the many, many chemical exfoliation options. But the one skincare staple I haven’t been able to nail down is retinol. I’ve definitely longed to be in the retinol club, but my sensitive skin and rosacea have made it a little terrifying. So I’m incredibly pleased to report that I took the plunge – with a drugstore serum, no less – and so far it has worked out completely for the best.

The benefits of retinol are some of the best documented in skin care – but so are the side effects, which can include irritation, redness, dryness, and even skin peeling. With sensitive skin, I knew I needed to be especially careful. As I started my search for a retinol for beginners, I knew I wanted something with a low concentration of retinol, which would give me the best chance to get used to the ingredient without being too scared off by side effects. 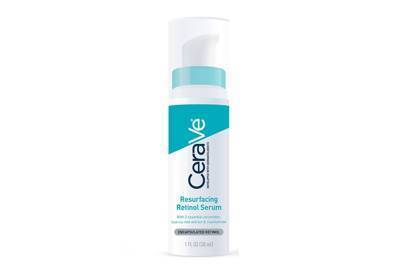 So I chose a few retinol serums for beginners and patch tested them on my inner arm. Of the three I tested, the CeraVe Retinol Resurfacing Serum ($16, Amazon – also available from Ebay) gave me the least reaction. It also didn’t specifically list a concentration of retinol, which made me think it would be pretty low (Beautypedia puts it at around .01%, which is definitely low, but still enough to see some benefits).

At first I used the serum just three times a week, always at night, and only used two other products: my favourite gentle cleanser and one of a few different basic moisturisers. On my other nights, I tried to stick with similarly gentle skin-care products, but I did swap in my trusty azelaic acid when my rosacea flared. Within a few weeks I was able to bump it up to every other night. Now, nearly eight weeks in, I’m using it about four to five nights a week.

For the first week I did get some irritation immediately after putting it on, but it only lasted for about five minutes and didn’t leave any lasting redness or irritation. It helped that, basically since the first use, I started waking up with softer skin. Gradually I noticed my pores around my nose looked smaller, the minor sun damage below my eye became significantly lighter, and my skin just looked plumper and healthier all over.

While my acne hasn’t gone away entirely, my pimples resolve so much faster when I use the retinol serum than when I’ve used basically anything else. Essentially, a healing process that used to take up to a week now only takes one to three days. And, crucially, I have noticed a huge improvement in my post-acne hyperpigmentation. The marks I had when I started are completely gone, and the new ones I get go away relatively quickly (it takes about two weeks now, as opposed to months previously).

Now that I’m nearly two months into this process, I’m just so proud of my skin! It’s usually so vulnerable and sensitive, but this taught me that, with the appropriate precautions, it can handle more than I think. It’s hard to say how much more of this serum I have left because the packaging is an opaque airless pump (which is a good thing as it will prevent the ingredients from degrading), but I’d guess I’m about halfway done. And I’m definitely planning to keep going on my retinol journey, perhaps even making it all the way up to a tenth of a percent one day.

It Cosmetics Wants to Blow You Away With Its New Mascara

One of these £17 miracle serums sells every single minute