U.S. District Judge Steven “Not So” Merryday denied an Assistant U.S. Attorney’s (AUSA) motion to delay a trial because a witness employed by the Bureau of Alcohol, Tobacco, Firearms and Explosives (ATF) had prepaid for a trip to view the August 21, 2017 solar eclipse in totality.

The court reasoned that the delay would “subordinate the time and resources of the court … to one person’s aspiration to view a ‘total’ solar eclipse for no more than two minutes and forty-two seconds.”

Can’t take issue with the result, but instead of just saying that, the magistrate–perhaps seeking his own two minutes and forty-two seconds of fame–penned a silly too-cute-for-words order built around Carly Simon’s 1972 hit “You’re So Vain.”

You may recall that Simon’s anonymous, self-absorbed antagonist (suspected to be Warren Beatty) “flew his Learjet up to Nova Scotia to see the total eclipse of the sun.”  (Speculation has it that Carly was referring to the 1970 total eclipse that was viewable along the East Coast of the United States).

In his order denying the motion to postpone, Judge Merryday mocked the AUSA who filed the motion for “boldly moving … where no AUSA has moved before”  and for “oddly” describing the eclipse “‘scheduled to occur,’ as if someone arbitrarily set the eclipse, as an impresario sets a performer to appear at a chosen time and place.” 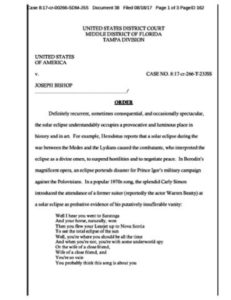 He unnecessarily ridiculed the witness for his prepaid “personal indulgence,” again invoking the Carly Simon song, which featured this line immediately preceding “the total eclipse of the sun” line: “Well I hear you went to Saratoga, and your horse naturally won.”

When an indispensable participant, knowing that a trial is imminent, pre-pays for some personal indulgence, that participant, in effect, lays in a bet.  This time, unlike Carly Simon’s former suitor, whose “horse, naturally won,” this bettor’s horse has–naturally–lost. 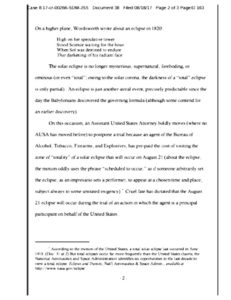 Meanwhile, he diminished the significance of a total solar eclipse as “just another astral event.”  The rare August 21 total eclipse will be the first to travel from coast to coast within the United States in nearly 100 years. 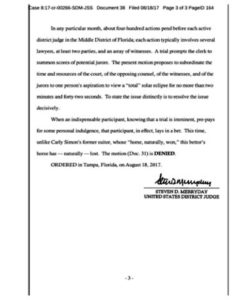 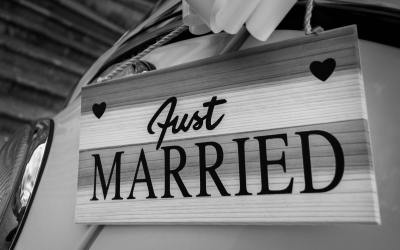