Horan teamed up with BBC Radio 1 to host a soothing and easy-to-follow music lesson using the hero song from his latest album Heartbreak Weather (2020). “I’m going to teach it how I learned the guitar, which is off YouTube,” says Horan.

“I still, to this day, have never had a guitar lesson,” he admits. If you fancy learning how to play guitar with Horan, then you’ll need a few things: an acoustic guitar – of course – as well as a guitar pick and a guitar tuning called DADGAD.

Isolation isn’t easy for anyone, but many of us are finding comfort in making things with our hands, whether that’s through cooking, sewing, or gardening. That said, Niall Horan is now adding a new skill to your quarantine activity list with a beginner’s acoustic guitar lesson for his latest song, “Black And White”.

Ready to learn how to play “Black And White” by Horan himself? Watch the full music lesson above.

Anderson Cooper on Raising a Baby During a Pandemic: “There Is Also Joy and Beauty”

Earlier this month, Anderson Cooper welcomed his beautiful baby boy via surrogate, and this first-time father is completely obsessed. In a video interview for The Ellen DeGeneres Show, Anderson gushed about his son Wyatt Morgan Cooper and opened up about what it’s been like to raise a baby during a pandemic. 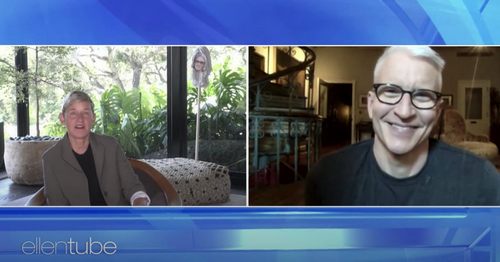 “People throughout millennia have raised kids through difficult times and difficult circumstances, and life continues,” Anderson told Ellen. “And even when there is sadness and suffering, there is also joy and beauty, and I think it’s important to be able to recognize both, and live in a world that has both of those extremes, and be able to function in that world.”

As a new parent, Anderson says he’s learning more about his son every day. “I just, like, stare at him. I can watch him for hours and hours and hours do nothing, and it’s amazing,” Anderson said. “Every day is different. He’s already focusing more his eyes and, yeah, so extraordinary. I mean, I know everybody always says this and how it changes everything, and I hate to be so cliché but it’s astonishing.”

Anderson then went on to explain that he named his son Wyatt in honor of his father, who died when he was 10 years old. He also gave his son the middle name Morgan because it was on the handwritten list of baby names his parents had drawn up when he was going to be born. Watch the full video here to see Anderson rave about his new baby boy.