The procedure involved having an Essure device – essentially tiny metal and plastic springs – inserted into her fallopian tubes to stop eggs moving from the ovaries to the womb. The implant can be inserted via the vagina and into the tubes in as little as ten minutes.

When mother-of-five Laura Linkson was offered a new form of sterilisation on the NHS that didn’t involve surgery, she didn’t hesitate.

Laura, now 35, was one of thousands of women in Britain given Essure. Five years later, she bitterly regrets ­having the procedure, which has effectively crippled her, she says.

In some women, the devices have ‘migrated’ or disintegrated, and the nickel titanium metal alloy and polyethelene terephthalate (PET) plastic fibres they are made from, have caused debilitating allergic reactions or cut into tissue, leaving women in excruciating pain or suffering nerve damage.

‘It started with me needing a stick, then a mobility scooter and now I’m in a motorised wheelchair,’ says Laura. ‘Some days I can’t get out of bed because of the pain.’ 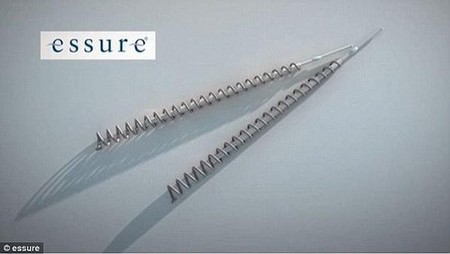 ‘There are at least three fragments which have set up all sorts of long-term problems, but it doesn’t seem there is any doctor in England with the expertise to get them out,’ she says.

Laura, a former legal clerk from Southampton, is pinning her hopes on a referral to a Dutch specialist who uses an imaging technique called fluoroscopy to locate the tiny 1-2 mm fragments.

Essure was first marketed in the UK in 2009. Last August the manufacturer, Bayer, instructed hospitals to stop using it. Although there had been a growing number of complaints, Bayer insisted the product was being withdrawn for ‘commercial reasons’. 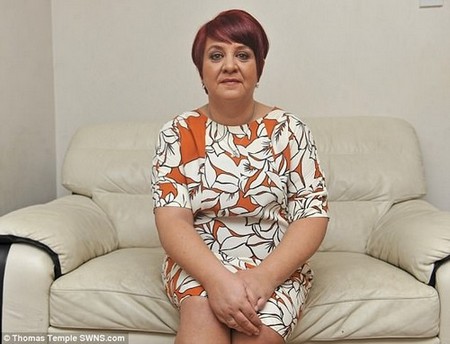 Janice Faulkner from Warrington, Cheshire, gained five stone, lost bladder control and was left unable to walk after the procedure

It said the CE European safety approval mark on Essure had expired and no renewal would be sought.

However, some NHS hospitals have continued to use up old stock, even though the Essure website now warns of side-effects including ‘perforation of the uterus and/or fallopian tubes, identification of inserts in the abdominal or pelvic cavity, persistent pain, and allergic or hypersensitivity reactions’.

‘We’ve been contacted by a number of women who say they have had Essure implants since hospitals were instructed to stop using them,’ says Jan Faulkner, who with Laura runs Life After Essure, a group campaigning on behalf of more than 300 affected women.

‘It is very worrying – there have been more than 30,000 complaints about Essure in America, but hospitals here have just carried on using it.’

She has written to more than 40 hospital trusts in Britain to find out how many have continued to Essure implant devices.

‘Blackpool responded saying they are no longer implanting Essure but we know they have recently because I am helping a lady who had it done there.’ (Blackpool Teaching Hospitals NHS Trust told Good Health it could not discuss individual patients but said it is no longer using the device.)

Separate inquiries by Good Health showed that the Rotherham NHS Foundation Trust in South Yorkshire had given Essure to one woman who, according to a hospital spokesman, had said she wanted the device despite the ban.

A spokesperson for NHS Grampian told us: ‘Three women chose to go ahead with the Essure procedure after detailed discussion with our clinical staff.’

She admitted that one of the three is experiencing continuing pain and is due to have a surgical investigation.

Essure is one of a number of medical innovations approved by the Medicines and Healthcare Products Regulatory Agency (MHRA) for NHS patients, with minimal testing. The problems share striking similarities with vaginal mesh tape, used to treat incontinence. In some women the mesh disintegrated, and shards of the material have sheared into surrounding tissue and nerves, as Good Health has highlighted.

Complaints from patients injured by faulty devices have too often fallen on deaf ears. Publicity about these kinds of issues led Health Secretary Jeremy Hunt to recently announce a review into the official response to the complaints.

Immediately after the devices were implanted inside her in 2008, a scan showed one had ‘gone missing’

Baroness Julia Cumberlege, a former health minister, has been asked to chair the review into three areas – vaginal mesh, the birth defects caused by Primodos, a hormone-based pregnancy test, and birth defects linked to the anti-epilepsy drug sodium valproate.

On Friday, Laura will join Jan and five other injured women for a meeting with Baroness Cumberlege in the hope that she will ‘see that the problems with Essure follow the same pattern as the problems with these other devices and should be added to her review’, says Jan.

The group will be joined by Carl Heneghan, a professor of evidence-based medicine at the University of Oxford.

‘Only three months before Essure was removed from the market, MHRA officials were claiming they couldn’t understand what the problem was,’ he says.

‘We’ve been here many times before. We need to fix this problem of defective medical devices once and for all instead of having repeated investigations which agree there’s a safety problem but everyone hopes will go away on its own.’

Jan, 45, a mother of five from Warrington, Cheshire, has only recently recovered from her own Essure nightmare.

Immediately after the devices were implanted in 2008, a scan showed one had ‘gone missing’. She was offered a second sterilisation with different clips, but unbeknown to her, the Essure devices were not removed.

‘I started getting agonising pains in my back and my joints, and had strange rashes but when I complained, the doctors laughed at me,’ she says. ‘They blamed the menopause.’

She was finally referred for surgery to remove her fallopian tubes in 2016 because of the pain. ‘I couldn’t believe it when they told me they had also taken out both the original Essure devices. I hadn’t known they were still inside me. But the relief was instant.’

The five other women attending the meeting include Charlene Baldwin, 38, a mother of three from Rochester, Kent, who like most of the others, had a hysterectomy to alleviate her symptoms following the Essure procedure nine years ago.

She suffers periodic paralysis several times a week in reaction to material from the device left in her body. ‘My children sometimes have to help me to eat,’ she says.

Dr Bas Veersema, a gynaecologist of the University of Utrecht, has pioneered a technique using high-resolution imaging for Essure removal and says his team has extracted 2,000 damaged devices from women.

‘What doctors don’t realise is that they fragment when you remove them,’ he says.

‘We have found all sorts of abnormalities you would not expect. Sometimes the device will perforate the womb or the fallopian tube, sometimes calcified deposits form around them or they blow up the fallopian tube with a build-up of fluid.

‘Scientifically we don’t really know if these fragments cause an inflammatory reaction, but we think they do.’

Bayer continues to insist the device is safe, as does the MHRA (which says women should report any problems to the Agency).