Bringing a new profound dimension to USA beauty pageants, Halima was quickly signed to IMG models alongside Bella and Gigi Hadid. Several runway appearances later for the likes of MaxMara and Alberta Ferretti, earlier this year, the 21-year-old became the first model to ever pose in a birkini for Sports Illustrated.

And now, Halima has added starring in Pandora’s autumn/winter campaign to her endless list of achievements.

Halima Aden is nothing short of inspirational. Born in a refugee camp in Kenya, at the age of six Halima moved to the United States before receiving international attention for being the very first woman to wear a hijab in the Miss Minnesota USA Pageant.

Halima joins five other inspiring women in the Pandora Muses campaign: Nathalie Emmanuel, Georgia May Jagger, Margaret Zhang, Tasya Van Ree and Larsen Thompson. Here, she opens up about finding her voice and why sharing her story makes her feel so empowered… 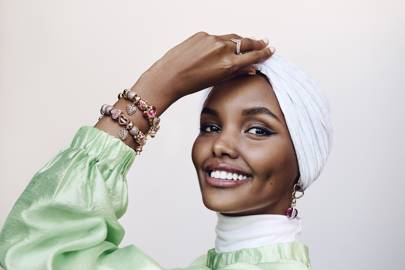 How did you find your voice?

For me, finding my voice came from my willingness to put myself out there and be the first in a lot of spaces. Because I didn’t see someone who looked like me joining certain clubs at school or pursuing different arenas, I decided that I would be the one to step into the unknown. I wanted the younger girls at my high school to see that you don’t have to conform to participate and not only participate but succeed.

If you were to voice one message to the world, what would that be?

Don’t change yourself, change the game.

How would you like to use your voice in the context of being a Pandora Muse?

I would like to continue to spread a message on inclusion, hope, and the notion that if you are not invited to the table, it’s your job to pull up your own seat and join the conversation. 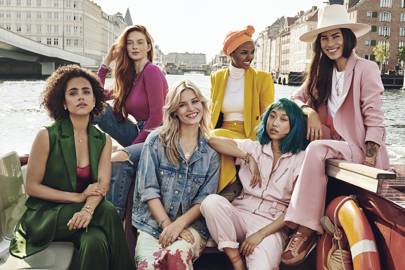 What does love mean to you?

To me, love starts with being the best authentic version of yourself. Love means being open and accepting.

Sending memes to and eating sushi with my three very best girlfriends who I’ve grown up with. The work I’ve been able to do with UNICEF. Having been on the receiving end of their services as a child in a refugee camp to now serving as an official ambassador has been a full-circle moment for me. Traveling to new places, which is why visiting Copenhagen where Pandora is located was so incredible!

When do you feel empowered?

I feel most empowered when I am sharing my story. If I can just inspire one person who has never before felt represented in a space than this journey is all worth it to me.

Why did you decide to partner with Pandora?

I love that Pandora celebrates women. That is something that has always been important to me. Being able to champion and empower one another is so imperative and significant.

What does jewellery mean to you?

To me, jewellery is such a beautiful gift to be able to wear. I was born in a refugee camp and didn’t grow up with money to buy luxury items or the non-essentials. Being able to wear jewellery now reminds me of how far I have come and how lucky I am.

Rosie Huntington-Whiteley owns this £12.99 Zara top in three colours and we need it in our lives