This is what we have learnt from this season of Love Island, where any woman with the nerve to develop an outspoken personality has been systematically slapped down and the men immediately exonerated. It’s 2019 and despite its eco-credentials and reusable coffee cups, the Love Island villa is running on pure gaslight.

WOMEN OF LOVE ISLAND: KNOW YOUR LIMITS. Remain docile, quiet and un-opinionated. Do not fret, tut, roll your eyes or – heaven’s forbid – raise your voice. Do not be negative, angry or annoyed. Remain, fun, light and respectful.

Do not – under any circumstances – make life in any way hard for your man.

If not – a warning to you all – he will crack on with the nearest available bikini set and, as you know – this will be all your fault. Have you not listened to a word I said?

It all started with Lucie. Not on paper a ‘difficult’ woman – but an unconventional one. She refused to join the girl gang – had the audacity to be friends with blokes and had to be cautioned by her partner Joe: “I didn’t think you were ‘that’ kind of girl,” he said.

Strike One Lucie; Joe is not happy. Behave!

Then there was Amber, labelled immediately as ‘tough’. Like a moth to a flame, Michael was drawn to her; professing to love her ‘straight talking’ attitude and ‘diva’ behaviour…until he didn’t. Suddenly he was ‘biting his tongue’ and uncomfortable with the fact that Amber’s fieriness was – spoiler alert – fiery. You play with fire, you will get your fingers burnt, Michael.

He then brutally dumped her – re-coupling with the comparatively less difficult Joanna. This shock re-coupling was – however – not Michael’s fault at all. Lest we forget, Amber is difficult. Michael cannot be blamed for running into the arms of placid Joanna. Amber made him BITE HIS TONGUE, people! What choice did he have?

A similar fate befell Amy – whose frayed nerves were too much for Curtis, so he swiftly called things quits. Once again, this was not the fault of nice guy Curtis. He’s a ballroom dancer! No, instead it was Amy’s insecurities that were at fault for the demise of their ‘half’ relationship, not the fact he was attempting to recouple with an unwilling victim Jourdan. Bad Amy- get some confidence quick! Maybe the fact Curtis said he would 100% stray again will help?

Maura is perhaps the most ‘difficult’ woman to enter the villa simply for the fact she has correctly identified she is on a gameshow predicated on sexual attraction. She talks about sex – about wanting it and enjoying it. She deep throated an ice lolly. She raised her voice when attacked. Wrong, Maura! This is not the way to snare a man. Look how Tom fled from your ‘cringey’ and ‘loud’ behaviour. Look how Tommy Fury was backed into the corner of the sex boxing ring by your advances. No. Instead, you must lower the volume, giggle and bat your eyelashes and you shall attract a nice…ballroom dancer.

“I knew there was a softer side to you,” gushes Curtis, like he’s just shot her with a tranquiliser dart, “I have tamed Storm Maura.”

Much better, Maura. You have successfully transitioned from ‘difficult’ woman to a ‘lovely young lady.’

Anna could learn a thing or two from you Maura. Look where her difficult tendencies have got her. Just two days into her relationship and her boyfriend has decided he would prefer to emigrate to India. Last night’s episode revealed the most shocking example of gaslighting the show has seen thus far. Jordan approached the confrontation like Anna was a wind-up toy. His bare-faced lies twisted and twisted in her back and then she was off – like one of those yappy mechanical dog toys.

“Behold!” says Jordan, as Anna becomes a typhoon of righteous rage, “look at this difficult woman! Who amongst you would judge me for leaving her now?”

Well, Jordan, the answer is us. We judge you. We judge you, and all the rest of your gaslighting troupe for the blinding displays of ingrained misogyny you have let slip all summer. It’s what has made this series less an enjoyable romp in Mallorca, and more a depressing display of toxic masculinity stinking up the villa and choking any woman bold enough to have a personality.

It has been innocuous enough to go by relatively unnoticed, allowing the men to smugly sit by and believe their bad behaviour has been justified. Think of Michael’s grating refrain of ‘chaldish’- levied first at Amber, and then at any woman who disagreed with him or found herself in an argument.

“It just shows her age” he said to Anton, handing him a gaslight as he warred with Belle; who had worn her sassy pants to the beach club and therefore risked being dumped.

‘Dump her and blame it on her behaviour’, was what the cry of childish really meant, ‘You’ve made her so angry you can now call her mad and get away with it.’

Strap your gas masks on; it’s the perfect crime.

This shirking of all emotional and logical responsibility in a relationship is not only – ironically – childish; it is a tragic indictment of the modern man. But it is, quite simply, unacceptable for this manipulation to go by unchecked, and something that I hope the Love Island producers address as thoroughly as they claim they are treating the psychological needs of the islanders this year.

Thank heavens for Ovie, Greg and Chris who are thus far holding up the reputation of decent men everywhere by refusing to wage psychological warfare on women who disagree with them. But thank heavens for ‘difficult’ women too. May the Mauras and Ambers of this world be allowed to shine on: loud, bold and bright and uncompromised.

Bite your tongues guys, it’s time to dim those gaslights. 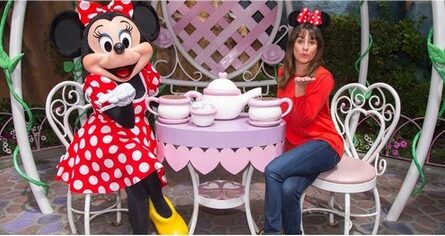 Over 50 Fun-Filled Photos of Celebrities at Disneyland