The dressing gradually releases nitric oxide, which in turn makes the blood vessels dilate, improving blood flow to the area. This increases the amount of oxygen-rich blood reaching the wound, boosting the growth of healthy tissue.

A high-tech plaster that emits a healing gas could slash the time it takes for wounds to mend.

The gas-releasing plaster, called EDX110, has already been trialled in the UK on patients with severe diabetic foot ulcers.

Results showed that it completely healed more ulcers than a standard dressing did. Scientists behind the new invention hope it will help to reduce the number of diabetes-related foot amputations currently performed in the UK – which average around 130 a week.

At least one diabetes patient in ten develops poor circulation to the legs and feet because high levels of sugar in the blood thicken the walls of capillaries, tiny blood vessels in the lower leg, reducing blood flow. 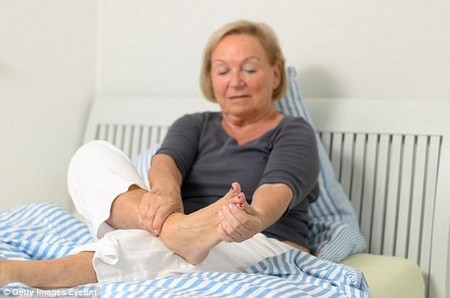 The gas-releasing plaster, called EDX110, has already been trialled in the UK on patients with severe diabetic foot ulcers (file photo)

Even the slightest cut can then develop into an open wound because, as blood circulation slows, the damaged skin is starved of the oxygen-rich blood and immune cells it needs to mend itself.

Up to 40 per cent of diabetic ulcers take three months to mend, and in around 14 per cent of cases wounds are still present after a year. Most are treated with dressings that absorb pus and debris from the ulcer while protecting it against infection.

Bandages impregnated with antibiotic medicine are sometimes used if there are signs of an infection, and special insoles can also be worn while walking to ease pressure on the ulcers on the sole of the foot.

Nitric oxide not only boosts blood flow, it can also kill off bacteria in a wound. However, in badly damaged tissue, the body’s natural gas-emitting mechanism fails. The new dressing could overcome this. Doctors first cover the wound with a gauze that contains the chemical sodium nitrite, then a sheet of special gel is placed on top.

Professor Steve Bain, from the Diabetes Research Unit at Swansea University, said the gas plaster had the potential to radically improve healing in many patients with foot ulcers (file photo)

The gel is made from water and carboxylic acid, which occurs naturally in fats and citrus fruits. When this acid comes into contact with the sodium nitrite, it triggers a chemical reaction that produces nitric oxide.

The plaster is designed to give a 20-minute ‘burst’ of high levels of nitric oxide to kick-start healing, followed by a sustained release of smaller amounts of gas over the following 24 to 48 hours, at which point it is swapped for a new one.

In a trial involving 135 diabetic patients with moderate to severe foot ulcers, each one received standard care, involving debridement (removal of dead tissue from the wound), plus antibiotics and insoles.

Half the patients were given the gas-emitting dressing, while the other half had a normal dressing.

The results, reported in the journal Wound Repair and Regeneration, showed that over a 12-week period, nearly half the ulcers healed completely with the gas plaster – compared with less than a third of those treated with conventional therapy.

In those that did not heal altogether, the plaster reduced the ulcer size by 89 per cent – nearly twice that seen with existing treatment.

The high-tech plasters are expected to become available in the UK next year and are likely to cost less than £30 each.

Professor Steve Bain, from the Diabetes Research Unit at Swansea University, said the gas plaster had the potential to radically improve healing in many patients with foot ulcers.