1 Prepare the mussels: In a large pot, pour in the wine or water and lemon juice. Add the mussels, cover the pot, and bring the liquid to a boil over medium-high heat. 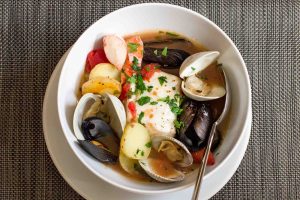 Watch the pan carefully because the liquid tends to spill out when it boils.

Once boiling, lower the heat and cook the mussels for 2 minutes or until they open. Use a slotted spoon to transfer the mussels to a bowl. Discard any that are not open. 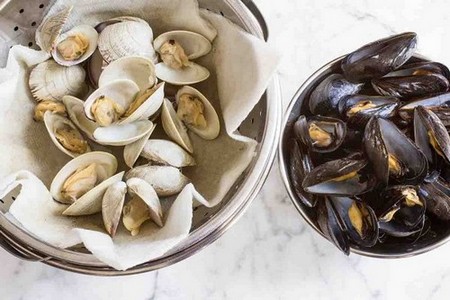 2 Prepare the clams in the same pot: Add the clams to the cooking liquid, cover, and return to a boil. Lower the heat and cook the clams for 2 minutes or until they open. Set a colander over a bowl. Line the colander with a double layer of paper towels. Tip the clams and their liquid into the colander – this helps strain out any sand or grit. Save the cooking liquid. Discard any clams that are not open.

4 Puree the tomatoes: In a blender, combine the tomatoes and their juice. Pulse until the mixture is coarsely pureed.

5 Make the tomato broth: In the same pot used to cook the shellfish, heat the olive oil. Add the garlic and cook, stirring, for 1 minute. Add the tomatoes, red pepper, salt, and black pepper. Cook, stirring, for 2 minutes. Pour in the chicken stock and the leftover liquid from cooking the mussels and clams. Bring to a boil, then lower the heat and cover with the lid slightly ajar. Simmer for 10 minutes to reduce the broth and combine the flavors.

6 Cook the fish: Add the fish pieces to the tomato broth; they should be not quite submerged. Cover the pot and cook for 5 minutes. The fish will be firm but not quite cooked through; it will finish cooking in the next steps. 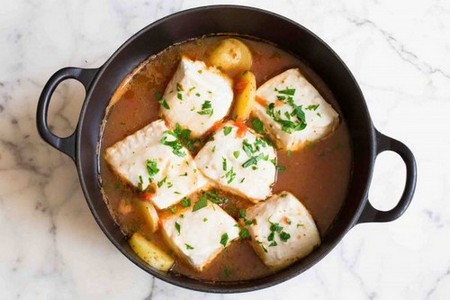 7 Add the cooked mussels, clams, lobster, and potatoes to the pot: Sprinkle 1 tablespoon of parsley over the fish, then add the mussels, clams, lobster meat, and cooked potatoes to the pot. Ladle some of the broth over top. Cover and cook for 2 minutes. Spoon more broth over top, cover, and continue cooking for 2 minutes more, or until all the shellfish is hot.

8 Serve the stew: Divide the stew between bowls, making sure to get plenty of broth. Sprinkle with the remaining 3 tablespoons parsley.