We are given a glimpse into his Parisian childhood through flashbacks, the first of which introduces us to his Senegalese father – a driver for the wealthy white Pellegrini family – who commits suicide in prison after being framed for the theft of a necklace owned by his employers.

The plot ultimately centres around Assane’s attempt to avenge his father and clear his name, but at no point do we learn anything about his mother. That’s the first Black woman missing in this action crime drama created by white Brit George Kay, also known for Netflix show Criminal, whose core cast is totally devoid of Black people full stop, let alone Black women.

Lupin, Netflix’s newest heist series, is currently their most-watched global show and it’s set to reach 70m households this January alone, making it more successful than both Bridgerton and The Queen’s Gambit.

This is no mean feat when you consider that it’s a French-language series with a Black male lead. However, if you look a little more closely the show is not as diverse and inclusive as one might think, and it’s Black women who are most notably missing from the cast. 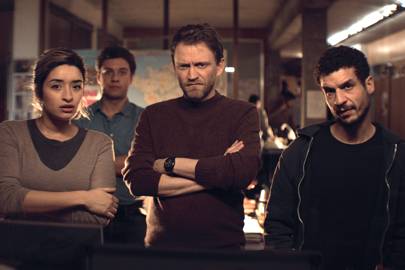 “There is an erasure of black women on screen,” says Creative Diversity Network’s Executive Director, Deborah Williams – and this is all too evident as Lupin unfolds. Lead character Assane Diop (Omar Sy), who possess the most swoon-worthy smile, lives his life as a charismatic, charming ‘gentleman’ thief.

What makes the erasure of Black women in this TV show particularly frustrating is how at multiple turns it leans on racial disparities to garner sympathy for Assane – yet ends up missing the mark itself by not casting any Black women in lead roles. They showcase how easy it is for Black men to be falsely accused of a crime, and how Black people are seen as superfluous to society, feeding into the stereotype that it’s the norm for Black people to hold positions that centre around serving their white counterparts.

Even Assane’s big heist relies on the reality that Black people are ‘unseen’. We witness this at the very beginning of the first episode when Mrs Pellegrini doesn’t recognise Assane’s father and is subsequently fearful of this Black ‘stranger’ trying to help her when she runs into car trouble. Then another 10 minutes later we are forced to sit through a scene between the Pellegrini’s teen daughter Juliette and younger Assane that plays on racial dynamics on multiple levels and is beyond uncomfortable to watch.

“Is what I hear about Black people true?” asks Juliette. “Black people can’t swim,” she follows up with a laugh. “I can swim,” Assane replies, “swim to me and I’ll kiss you,” she says.

He inelegantly swims to her, and as she waits nonchalantly at the other end of the pool there’s an unnerving feeling surrounding the power that this white teenage girl has over this young Black boy. And although it is used to set up the relationship that follows in adulthood, it speaks to the historical sexualisation of Black men by white women who have no qualms when it comes to wielding their white privilege to get what they want. And while sadly, these themes weren’t developed to showcase how problematic this behaviour actually is, knowing that Kay was aware enough to feature them, makes it even more disappointing that he and the powers that be saw no problem with creating a show where its central character is positioned as the recipient of one white woman’s charity, and another’s sexual fantasy. While his wife and his journalist ally are also both white women.

The erasure of Black women

This lack of consideration and dismissal of Black women is all kinds of problematic, as when you don’t include Black women into the fabric of society on and off-screen it can have far-reaching consequences. It echoes the centuries of oppression and marginalisation that Black women have endured, and reinforces that they are not valued, or desirable and that they are essentially disposable.

While “for younger Black female audiences not seeing themselves on screen, can negatively impact their sense of self, and their belief in what their lives could look like,” shares digital media studies lecturer at Cardiff University, Dr. Francesca Sobande.

Spoiler alert – it won’t be running a Fortune 500 company, or being a celebrated detective, or an award-winning journalist for that matter. However, “we also don’t want to see tokenism and superficial surface levels forms of representation, which is the other side of the coin when it comes to the issue of Black women on screen,” adds Sobande. As all too often when we do see Black women on TV they are one-dimensional characters, like the angry Black woman, the uneducated lazy single mother, or the mammy who lives to serve. These only reinforce negative stereotypes, to the white audience who let’s face it, are the only demographic these shows are truly catering for.

But why is the struggle so real for Black women in film and TV? “People fear black women because they are one of the most oppressed women in the world, and there is an undeniable collective fear that we will retaliate. We are perceived to be a threat by society as a whole, which is why we aren’t given a platform and why many Black women have to water down their ‘Blackness’ and comply if they want any chance of getting ahead. Because what you’ll find is that there is no support system for them in the world of TV and Film, or otherwise,” believes Williams.

A web of oppression

With Ofcom stats revealing that women, ethnic minorities and disabled people are being unrepresented by the UK TV industry (and if Lupin is anything to go by, most of Europe too). It’s shouldn’t be shocking to learn that Black women – caught in a web of anti-Blackness, colourism, sexism, classism, and xenophobia are being grossly underrepresented. “Just look at the uproar caused by Sainsbury’s latest Christmas ad.

Lupin’s creators had the opportunity to depict Black love – rather than make his ‘soulmate’ a white woman – and Black allyship, by choosing to cast a Black female as his sidekick. Instead, they chose to flood the screen with white characters to push the narrative that ‘not all white people are bad’. No doubt they thought that the alternative was too progressive and alienating for their white audience. Who knows, but what we do know is that “if we don’t nurture Black female talent behind the scenes and push for more Black female writers, directors, and commissioners we will continue to see the erasure of Black women in the media,” believes Wood.

Let’s hope that the industry learns from Lupin’s glaringly obvious mistakes and starts creating truly diverse TV that finally allows Black women to exist on screen in all their nuanced glory in the same way that white women have been afforded.