Cancer is the second leading cause of death globally, and was responsible for an estimated 9.6 million deaths in 2018, according to the World Health Organisation. Globally, a shocking 1 in 6 deaths are due to cancer.

Author Laura Pearson experienced this first hand. Laura was diagnosed with breast cancer while she was seven months pregnant with her daughter. Faced with the prospect of her child growing up without her, Laura, who is thankfully in remission, was inspired to write I Wanted You To Know, with a series of letters, in which ‘Jess’, a new mother battling breast cancer, pens to her daughter about everything she had hoped to one day tell her in person.

Anyone who has lost someone to cancer or experienced it themselves knows all too well how it steals innocent people’s lives and leaves a wake of tragedy in its path.

Jess never imagined she’d be navigating single motherhood, let alone while facing breast cancer. A life that should be just beginning is interrupted by worried looks, heavy conversations, and the possibility of leaving her daughter to grow up without her. Propelled by a ticking clock, Jess was inspired to pen her letters, which cover how to love, how to lose, how to forgive, and, most importantly, how to live when you never know how long you have. 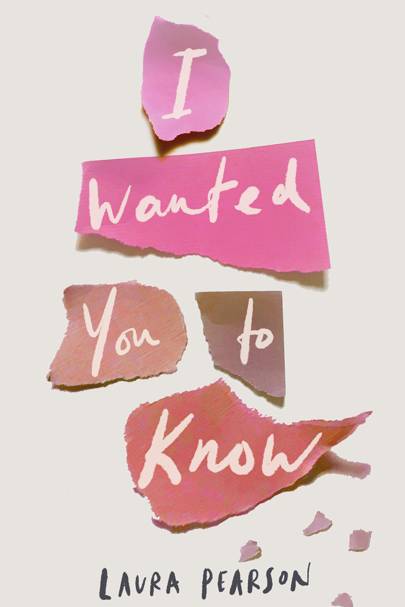 I wanted you to know that I am not only cancer. All your life, you’ll have this story and you won’t have me. My mother died of cancer when I was a baby. That’s what you’ll tell people, and they will say how sorry they are, and it will seem like me and cancer are inextricable. But it wasn’t always like that. I was diagnosed with cancer at twenty-one, and I lived for over two decades with no thought of cancer. Just because cancer was my ending, I don’t want you to think it was my everything. My everything is you.

Up until recently, I associated cancer with old people. I knew that young people, even children, could get it, but I didn’t think they died. I have been naïve and I’m glad about that, really. Because perhaps if I’d known that this is something that might happen to me, I’d have been more scared, and I wouldn’t have lived as carelessly and well.

I remember the first time Gemma and I smoked cigarettes. She got her older brother Dan to buy them for us, a pack of ten Marlboro Lights. We were fourteen, and it was early summer. We walked back from school to her house together, and we snuck upstairs and knocked on Dan’s bedroom door. He was playing trance music really loud and we didn’t know whether he’d heard us, so Gemma opened the door. He was lying on his bed with a girl from the year above us.

They were kissing and his hand was inside her shirt. I’d had a crush on Dan for years, and as we stood there, I asked myself whether I wished it was me, lying there with his hands on me. I did, and I didn’t. It frightened me a bit. I thought Dan would shout at us for walking in on them, but he just reached down for his coat, pulled the cigarettes from the pocket and threw them at Gemma, and before we were out of the door, he was kissing the girl again. She didn’t say anything, and I wanted to know how she felt, whether she minded the interruption or our eyes on her.

‘Is Dan seeing that girl?’ I asked.

Gemma’s parents weren’t at home. They were both nurses and they worked shifts. We went out into the garden. Gemma had a lighter that she’d bought from the corner shop. I was worried that Gemma’s next-door neighbour would see us and tell Gemma’s parents, but Gemma shrugged and said she didn’t care. She was braver than me. She pulled the cellophane off the packet, took out two cigarettes and lit them both, then handed one to me. I felt self-conscious, but glad we were doing this for the first time together. I knew I would cough or just do it wrong somehow, and I didn’t mind Gemma seeing that.

I remember the feel of the sun on my cheeks and forehead as I put the cigarette to my lips. It tasted awful, just the way you’d expect, and I didn’t understand why so many people did it. I don’t think either of us inhaled properly. We blew the smoke out into the warm air and raised our eyebrows at one another. I wondered how we looked, whether we looked cool, or older, or just different. We were still wearing our school uniforms, and I remember thinking that my mum would smell the smoke on mine and ask me about it. It wasn’t enough to stop me from doing it. I felt a little bit sick and a little bit dizzy, but I put the cigarette to my lips again anyway.

Just then, the girl from Dan’s room came out of the back door with nothing on her feet and asked if she could have a cigarette. Gemma shrugged and handed one to her, and she asked us if we were in Year Nine, which she must have known we were. It was too quiet, and I wanted Gemma to ask the girl some questions, and I was trying to remember whether she was called Lucy or Layla or Lauren. She’d played the flute once, in assembly, and I still had an image of it in my memory, and I didn’t know why. She was probably fifteen, and she smoked more convincingly than either of us, and I was desperate to know whether she and Dan were having sex, whether they’d just had sex in the time between us going into his room and her coming outside to smoke with us. But I couldn’t ask.

When all three of us had ground the butts out on the stones that bordered Gemma’s lawn and Gemma had taken them to the outside bin, Dan came outside. He put a hand up to shade his eyes from the sun and said to the girl that he thought she was going home. She said she was, and she swept past him without touching, and he watched her go. And then I remember exactly what he said to us.

‘You’ll die of cancer if you smoke too many of those.’

It was unexpected and I wasn’t sure whether he was joking. I’d seen him smoking plenty of times. But not recently, I thought. I could still taste the cigarette in my mouth, and I hadn’t enjoyed it, but I was planning to smoke the rest of the pack with Gemma the first chance we got. In fact, I’d wondered which of us would have one less because of the one the girl had taken. We’d split the cost equally. I felt like smoking was probably something you had to practise before you were any good at it. But now what Dan had said had kind of spoiled it for me and I felt like the afternoon was over. I said that I was going to go home.

Gemma shrugged and went inside. Dan was sitting on a deckchair near the back door, and when I walked past him, he touched my hand and said he’d see me later. I pulled away, flustered. I hadn’t kissed anyone yet. I knew Gemma had, and I felt like I was losing ground, like she was leaving me behind. But I wasn’t sure I was ready for it. And now Dan, the boy I most wanted to kiss, was flirting with me, and I was scared.

I walked home, crunching on Polo mints and hoping that would be enough to get rid of the smell of smoke. And it seemed to be, because Mum never said a word. I don’t remember smoking the rest of that packet of cigarettes, but I suppose we must have done, and there were other packets after that. But I never became a regular smoker, and I’ve sometimes wondered how much of that is down to those words of Dan’s. You’ll die of cancer. And now, here I am, dying of cancer anyway.

I had my first kiss a couple of weeks after that, and it wasn’t with Dan. It was with a boy from my English class who we saw in the park with some of his friends one Friday night. He led me away from Gemma and pushed me up against the ladder of the slide and pressed his fat tongue into my mouth before I was ready, and I hated it. I wished, then, that I’d been brave enough to flirt back when Dan had flirted with me. That I’d just turned up at his house one afternoon, knocked on the door. You have to take what you want when it’s offered, because it won’t always be offered again.

Dan still lives at home and I see him sometimes, when Gemma and I go out in town. He knows I have a baby. He probably knows I have cancer, too. I wonder whether he remembers what he said to me, that summer afternoon seven years ago. About the cancer, and about the kissing.
I wanted you to know that I’m not only cancer. I was a teenager, once, just ordinary and young. Desperate to get older, with no idea of what would happen when I did.

How to stop saying yes when you can’t, you shouldn’t or just don’t want to