Nothing can quite prepare you for the kinetic and magnetic energy of this 27-year-old as she switches from hilarious self-critic – “Whenever I get a script I skip from the leading role to the second or third friend as I think, ‘no one famous will want that so I might get it!’” – to musing on the biggest issues facing women today.

It is also quickly clear in our bouji London café setting that Charlotte is a very rare actress. In fact, she would rather spend the interview bigging up her fellow acting pals – in pure Taylor Swift circa ‘the squad years’ fashion – than talking about herself. As we laugh our way through the interview she constantly remarks, “please make sure you get their name and give them a shout out”. The names act as a list of some of the most exciting British talent working today from Jodie Comer to Ria Zmitrowicz who broke our heart in Three Girls. 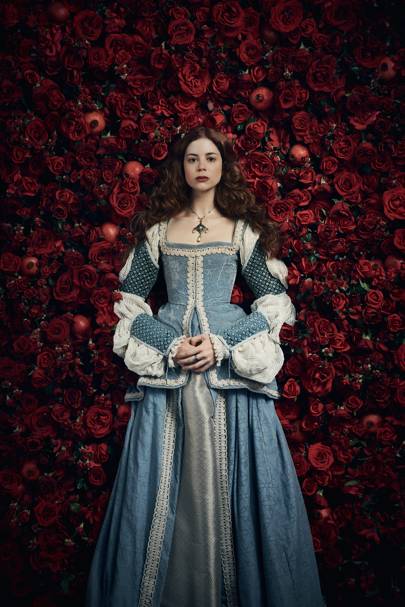 The actress who starred in Game of Thrones as Myranda (the lover of the ghastly Ramsay Bolton for four series) is, however, currently at a turning point in her career. The Spanish Princess, which is her first big leading role, premieres just before our meeting and she has just landed ANOTHER major role starring in Julien Fellows’ (the creator of Downtown Abbey) new Netflix project, The English Game. Alexa, play This Girl is on Fire by Alicia Keys.

As she attacks her croissant, Charlotte is serving me young Claire Foy vibes who is the definition of humble and endearing offscreen but has the poise and power of a literal Queen on screen. Charlotte’s notable humble nature is clear when she doesn’t just laugh but howls at my mention of her now stepping into Hollywood. “I am an actress largely in my living room in Clapham Junction! We have the Hollywood sign printed on the wall, though!”. She laughs but she is deadly serious.

Whether she knows it or not, the coming of Charlotte Hope is upon us and here she discusses playing a historical figure, her love for a supportive sisterhood and why she is such a fighter…

Catherine – the poor Hun – has a dowdy image…

“I have this friend of mine who said, ‘oh Katherine? I guess she’s not the attractive wife, is she?’ I will say I would much rather play someone who isn’t the most spellbinding beautiful person because I am not that person and I don’t want to worry about my angles or how good I look on that day. You have a real freedom when you don’t have to worry about what you look like. Don’t get me wrong, the Catherine we have created is not a minger! It was also Tudor times, so we didn’t even wear mascara. If I was playing Anne Boleyn or Helen of Troy, I really would be losing sleep!”

“You get set back a lot in acting as there’s a lot of no’s with doors being closed on you and I have had a couple of weeks where I have lost out on jobs I really wanted. I was thinking about it and this woman comes up against every obstacle and she comes back fighting harder. It’s really a story of determination and perseverance: she comes to England as a Spanish Princess and everyone is really horrible to her.

She’s read these stories of kings and queens, thinking it’s going to be a fairytale like the Knights of Camelot but it’s actually miserable, the weather is sh*t, Arthur is a bit of a dweeb, then he dies – spoiler – and she suffers so much adversity. Catherine is like a warrior princess.” 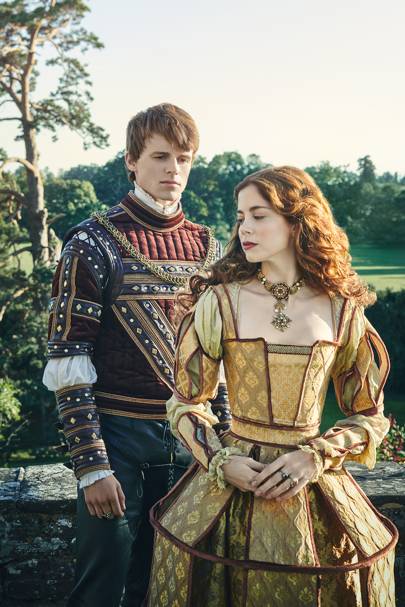 The Spanish Princess is a pressure cooker of the issues we are still facing as women today. Catherine is just like me, too, I am also a hot mess sometimes…

“The stakes were much higher in Tudor times as women could die very easily in childbirth and be wronged very easily. They went through the same emotions as us but on a much higher plane. It’s a pressure cooker of everything we are going through now. Catherine is lost trying to find her way – like me. She falls in love and follows her heart when she shouldn’t do – like me, a hot mess! We are all a bit messy. Catherine is even like that. She isn’t always likeable, she says things she shouldn’t, she’s quite entitled, she can be conniving and a bit of a bitch quite frankly! I don’t want to play someone who is painted by numbers. I want to see women who are messy and multi-dimensional. We are dealing with the same things in The Spanish Princess but on a heightened level. The women were so bound by rules that they had to constantly push boundaries. Now we don’t feel so locked in, but we are still battling the same battles in many ways. We are just pretending it’s a different game.”

I am very tenacious. I sent audition tape after tape unprompted for this role…

“I really, really wanted it. I curled my hair and wore a period skirt from a play I was doing – I looked like a 1940s housewife but in my mind, I was Catherine. I must have made five tapes. I am a fighter and you don’t get to fight a lot mainly just because I have struggled for a really long time. I have been doing this job for eight years, I live in a house of actors in Clapham Junction and we have all been hustling for a really long time with audition after audition, tape after tape.

I was even helping others audition so I was ‘warm.’ I even set up a self-taping company so I could just act all the time. I really learnt how to fight in that time. I always had that though, my Mum told me stories about how when I was younger, I got into competitive reading competition with kids in nursery!” 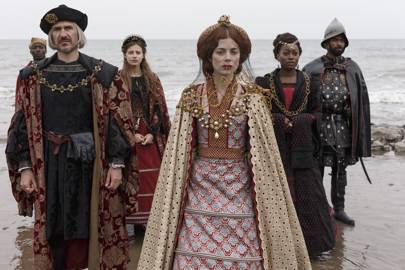 I realised very quickly this industry can be really rough. So, I decided to support the actresses around me…

“I love to collect waifs and strays, so my house is just filled with actors and people being creative. It isn’t a hub of talent, it’s a hub of triers. We were up until 12.30 last night filming tapes for Pip (my house mate’s) audition today. I also live with Ria Zmitrowicz (who starred in Three Girls). We met at a workshop audition process where they were trying to find the female Inbetweeners. They tried to do that for about four years and it never worked.

It can be bitchy amongst other actresses, but I thought to myself, in moments like that, this industry is really rough, and I can either be friends with these girls and support each other through that or I can be really miserable on my own. Jodie (Comer) is in my self-tape club, too – I am always blown away by her. We do all our tapes together too – we met after we did an episode of Law Order when we were 21 years old.”

The Spanish Princess is literally a sisterhood…

“We were a real group of women doing it and hustling together. When we first started The Spanish Princess, they said they were using only female directors. I thought that was about redressing a balance which is a really important thing to do but it also meant they gave this project to people who it meant a huge amount to. The first unit director, Birgitte Stærmose said, ‘this is the first time in my career I didn’t have to fight tooth and nail against the safe bet of a man. Someone took a chance on me.’

What it meant was we were a group of women thinking, ‘finally this is our time at long f**king last!’ Even late on a Friday night we would be there together after getting up at 5.30am fighting together. It was literally a sisterhood. It was amazing to look at each other and say, ‘I can see you; I can see you doing this.’ It was a passion project for that reason.” 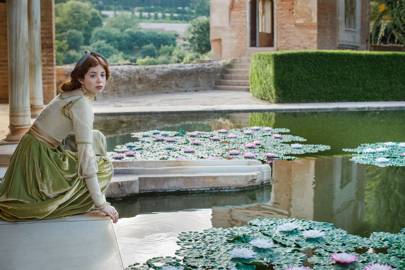 I learnt my Spanish accent by watching YouTube videos…

“I learnt that accent by watching YouTube videos of the Spanish ballet dancer called Tamara Rojo. I started with Penelope Cruz but obviously that’s too sexy – Catherine is meant to be pious! So, I had to look for a new muse. However, in the week of rehearsals I called my Mum and said, ‘do you think I should pay for accent lessons as I am really worried?’ My mum, who is really frugal, said, ‘you should do the accent coaching’. So I eventually did. I got militant with it and made everyone speak in Spanish accents at all times whilst filming. I even got to the stage of doing it with the hotel staff we were staying in!”

My peak lol on set was…

“I went up to Dame Harriet Walters (who plays Margaret Beaufort) and asked if she wanted to be on our WhatsApp group chat. She said no! Cut to four weeks later someone else asked her and she accepted! Now she’s the key contributor sending us photos of her gardening. Love her!”

I find sex scenes very liberating. When it comes to body image my mum taught me very early on to appreciate what you have got because it’s only going to get worse…

“Catherine is a pious minx! I am really comfortable with my body and always have been. I really love my body and I don’t think it’s perfect. But my Mum taught me really early on, ‘appreciate what you have got because it’s only going to get worse!’ I really have lived by that. I think our bodies are amazing, all our bodies look beautiful. I love Naked Attraction for that reason. There should be more shows like that because we are so precious about nudity and scared of it! Actually, we all have them so why are we so scared? We are just scared of the unknown. I like sex scenes for that reason as they are so liberating.” 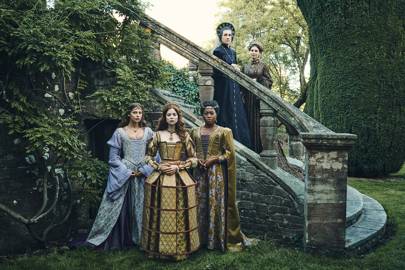 “GOT was the first time I felt like I was doing it! I spent a lot of time doing things like five days on Casualty and I was just pleased to be getting paid to act. GOT was the first time I thought, people I know might actually just watch this of their own accord – not when I have just sent it to my Mum. I have a really vivid memory of thinking when I dreamt what my career might be starting out this is the kind of thing I wanted to be doing and here I am doing it. It was so exciting. I remember being in the car on the way home after finishing season 6 and Linger by The Cranberries came on. I was dead tired, and I had a moment thinking, I think I am actually doing it!”

‘Failure’ has taught me everything is just fluff and noise…

“I did my first lead in a film with Richard Gere called The Three Christs and then when it came out it literally bombed. The Hollywood Reporter called it, ‘a God awful bore of a movie.’ It was a literal failure. From that experience I learnt to pick myself up and keep doing it. You can’t ever think, ‘oh I was a lead opposite Richard Gere, I am better than anything.’ I have never been too good for anything. I loved doing that film – I was shooting in the summer in New York – it was the most magical two months. That doesn’t get deleted because the film didn’t do well. It taught me that no one can take anything away from you, the rest is fluff and noise.”

Yaas! Lashana Lynch will be the first female and first black 007 actor