The 70-year-old, who famously revealed her transition to a woman on the now iconic Vanity Fair cover in 2015, told her gathered camp mates, actress Jacqueline Jossa and Girls Aloud’s Nadine Coyle that she initially started the process over thirty years ago by taking oestrogen.

But upon meeting her now ex-wife, Kris Jenner, the former Olympic champion started ‘chopping off’ her developing breasts which were a 36/38B at the time.

Caitlyn Jenner has candidly opened up about her transition journey to her fellow camp mates down under in I’m A Celebrity Get Me Out of Here.

Opening up about her experience, the reality star said: “Over many many years I had a lot but then near the end it went pretty quickly because you can do your face and your chest all at the same time which they did.”

“Actually, for guys if they go on estrogen, they will grow boobs ok. And in my case, I was on estrogen back in the 80s and had a little 36/38B and then I met Kris and had them chopped off. I’m so confused in my life,” she continued. 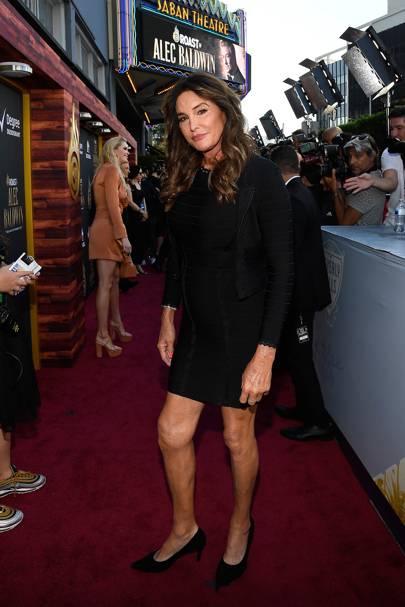 Speaking about her more recent procedures, Caitlyn said: “And then the second time round 25 years later I was back on estrogen obviously and they came back some but not much. So, I really had to have them done so it is kind of past the point of no return.”

Caitlyn also revealed to the campmates that the aforementioned Vanity Fair cover in 2015 was a, “big FU,” to those who were taking to social media to spread, “terrible things,” about her.

Speaking openly Caitlyn shared: “For me this was a big FU to the millions and millions of people out there that had said terrible things about me. And it just came out and it just shocked them. Transitioning and trying to make an impact (on) social media is extraordinarily important.

“As soon as the cover of Vanity Fair broke, in the next 4 hours and one minute, it broke the world record for the fastest to 1 million followers on Twitter,” she continued.

Last week Caitlyn opened up to say that her kids still call her dad whilst her 20 grandchildren now call her Boom Boom to avoid any confusion over the use of gender titles.

Caitlyn also said she doesn’t mind her children still using the title of ‘dad’ because she will remain their father despite her transition. “My kids all call me dad, Kendall asked me first and I said “dad”, I’m your dad and I’ll always be your dad till the day I die,” Caitlyn shared.

“But what they’re really good at which shocks me all the time is when they’re talking about me, “My dad she…” and it’s tough to change the pronoun in the middle of it. Bruce raised them and Caitlyn is enjoying their life with them.”

The gathered camp mates put it perfectly when they praised the Jungle star for being so open and honest – claps for Caitlyn.

17 pairs of the best designer shoes ever

The Pussycat Dolls are reforming