Aurora Borealis Hunting in Yellowknife. Our group heads out with Joe Buffalo Child, tonight’s North Star Adventures tour guide. He offers affable greetings in English as well as other languages for all on board the tour van.

“Spot five stars and I’ll find an aurora,” Joe declares, with the confidence of a seasoned hunter. “Better yet, find the Big Dipper and you’ll see aurora borealis as if you’re inside a cosmic shower.”

Depending on cloud cover, Yellowknife’s northern lights can be visible for an hour or so on either side of midnight, for about two-thirds of the year – omitting the summer months, when you’ll have to settle for the midnight sun.

Yet, it’s aurora viewing that lures adventurers from all over the world to this diverse and extraordinary city located on the north shore of Great Slave Lake in Canada’s Northwest Territories. 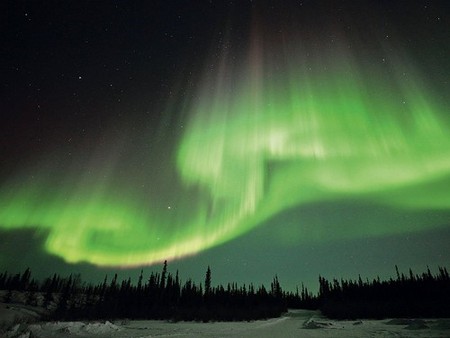 Our van heads west along the highway, among forested wilderness that will eventually meet Alberta, some 760 kilometres away.

“Anyone take the town tour?” Joe asks. “My cousin Dene is this week’s host.”

Among others, I admit participation in the insightful tour of Yellowknife’s unique offerings. The Old Town section boasts a charismatic flair, including the famous “Ragged Ass Road,” and the old miners neighbourhood features plywood shanties reminiscent of a bygone age. Pilots Monument, which sits atop a massive formation called “The Rock” offers incredible views of Great Slave Lake, Back Bay and beyond.

From the van, we glimpse the entrance point to the ice road at the soon-to-be-frozen Great Slave Lake.

“When hunting aurora under this cloud cover, it’s best to keep moving,” says Joe, the van purring along with us ten hardy souls secure in its heated comfort. The mid-September night’s temperature is flirting with the freezing mark.

Joe twiddles the radio knob to a nostalgic golden-oldies channel. “Anybody know this?” He sings along to “Michelle,” his mellow guests joining the rhythm, albeit with comical flair. Joe picks another song, before we eventually make our first stop. We spill out of the van, using Joe’s safe-exit footstool.

“What about hunting animals?” An unlikely inquiry from Jasmine, a Singaporean.

“A lot of meat for one family,” she replied.

“No, the bounty is always shared. Elders first, then the needy, and then everybody else,” he says, proudly. “We share and use everything from animals, nothing is wasted.” Searching the cloudy sky, he shines the spotlight further west. “Let’s keep going.”

After another no-show stop, we meander on. Joe steals skyward glances, while seeking more from his worldly audience. How to make glutton-free Yorkshire pudding? What’s the weather like in Buenos Aires? Which bar made the Singapore Sling famous? He engages each of us, enjoying our responses.

By the third stop, about 65 kilometres out, Joe studies a small break in the clouds. It’s past midnight; cameras are ready on tripods, waiting. Anxiety heightens, feet stamp, hopes dwindle, the cloud cover breaks up but is still substantial.

Joe’s distribution of hot chocolate in paper cups works its magic, renewing faith in our mission of spotting aurora borealis, but as he collects the cups, the warm van beckons once again.

“Hang on!” Joe cries out, his spotlight traces an elongated cloud as it traverses quickly across the clearing sky.

He aims his pre-set camera and reveals a green image. “It’s about a two.” That’s two out of ten – he grades the intensity of the auroras. The naked eye cannot see much colour at this intensity, but the camera can. We need at least a grade four, as the slight green fringes disappear beyond the treed foreground.

He informs us that although intensity and shapes of aurora may be similar, they do have unique characteristics that excite him.

Joe explains that oxygen molecules about 100 kilometres above the Earth determine the predominant green and yellow colours. The oxygen molecules at higher altitudes produce a red fringe. The absence of rarer blue and purplish hues, caused by nitrogen molecules, leave something to look forward to another day.

The aurora dances magically across the sky, as if splashed by a painter’s brush. It’s as though I’ve peeked into another realm of ancient secrets and glimpsed the wonders of space – a feeling I describe as stepping inside a rainbow.