This Is Us answered a few key questions during the season four finale, but also left us with a few more. After learning that Kevin is a father in the season three finale, we finally learn who the mother of his child is.

Turns out, it’s Kate’s best friend, Madison, who Kevin had a one-night stand with earlier this season. And that’s not the only shocker – she’s actually expecting twins!

In the flash-forward, we get a glimpse of Kevin’s kids as he hugs his son and daughter while visiting with Rebecca. As he goes to hold Rebecca’s hand, we also see a closeup of his wedding band. So, that presents a new question: who is his wife?

Well, the most obvious answer here is Madison. Not only is she the mother of Kevin’s children, but it seems like the two get engaged in the near future. In the season four midseason finale, Kevin mentions that his fiancée has morning sickness as he celebrates his 40th birthday. During his conversation with Madison in the season four finale, he also makes a point to let her know that he “is all in” when it comes to raising their kids, and that his new epic love story will be his children.

However, we all know that Kevin’s great love has always been Sophie. In fact, we even see Sophie admiring his cologne ad as she goes into a subway station in NYC during the finale. Their last interaction at Sophie’s mom’s funeral also made it seem like their story isn’t over yet. Perhaps Kevin proposes to Madison, but after the birth of their twins, they realize they aren’t right for each other and call off their engagement. Instead, they choose to raise their kids together, and Kevin eventually finds his way back to Sophie. Season five can’t get here fast enough!

This Is Us: Everything We Know About the Flash-Forward and Where Everyone Ends Up

This Is Us really knows how to keep us guessing. At the end of season two, the show jumps far into the future as Randall and a grown-up Tess visit a mysterious person, and we’ve slowly been uncovering more details ever since. So far, we know that the Pearson family is going to visit Rebecca, who appears to be on her death bed. The family is also getting together at the house that Kevin, who aged quite nicely, built next to their family cabin in honor of Jack. 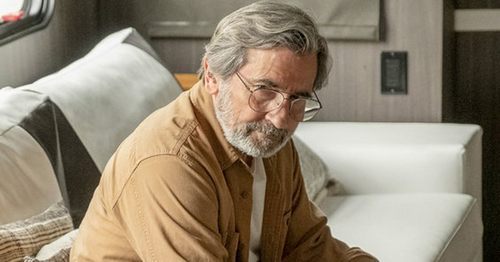 As for how far in the future the flash-forward is, it appears that 15 years have passed from the present-day timeline, making the year 2034. While a few characters haven’t been shown yet, including Kate, Deja, and Annie, here’s what we do know about where the rest of the Pearson family ends up in the flash-forward.

Usually our worlds are miles apart from the rich and famous but as Coronavirus grips the world, people from all walks of life are facing the same daily anxieties and retreating into isolation.

With all the free time we seem to have right now, we’ve been perusing social media to see how all our favourite famous faces are spending the isolation period.

Miranda Kerr has been amping up her skincare routine, Kylie Jenner recommends playing puzzles to pass the the time and Harry Styles is… learning Italian and sign language.

Whilst we’ve mostly been binge-watching Netflix, devouring tinned food and attempting to understand TikTok, Mr Styles is using the isolation period to better his mind.

When asked how he was holding up, he said: “It’s a little difficult but it’s alright. I’m lucky I’m with friends in a little safe self-isolation pod. It’s a very strange time, we’re just being careful, listening to music, playing games and doing some face masks. The classic quarantine stuff.”

As well as keeping on top of his skincare regime, Harry added: “I was learning Italian and I was doing some sign language classes, reading and checking in on people.

“Now is the perfect time to learn a new skill or try a new hobby. We have nothing, but time,” he said.

We couldn’t agree more and if he needs to check in on us, we’re just one Zoom call away.

Your Kids Can Get Their Hair Cut at Disney World