Aimee Lou Wood has fast become one of the most fearless actresses of her generation. Sex Education was the 24-year-old’s very first on-screen role and in her very first scene she was having full-blown, tits out, sex.

Now, with Sex Education season two dropping, Aimee is set to break down more boundaries as her on-screen character experiences a sexual trauma. But her greatest work and most honest work has been with her inner self, off-screen.

Here, as she joins the cast of the new West End production of Uncle Vanya, Aimee appears on the latest edition of GLAMOUR UNFILTERED – our bi-weekly celebrity chat show hosted by Josh Smith – and talks powerfully about how Sex Education helped liberate her from her issues with body image…

How have you dealt with the insane year since the release of Sex Education season one?

I think it was so helpful that I went straight into another job after Sex Education, and it was such a different character and such a different story to tell that it was like I had to throw myself in. It was so helpful because I think if I’d have just had time and space to dwell on how big Sex Ed was, I would have just got really overwhelmed. I’ve definitely still got a lot to learn about retaining stuff for me. My instinct is to always kind of share. I’m a very expulsive person. I want to just share everything but learning that that in itself is slightly a persona, that in itself is actually a mask sometimes and sometimes the sharing is kind of covering up other shit. So I’m trying to just realise that I don’t have to give it my 110% energy in every encounter that I ever have because it’s kind of impossible when I’m walking on the street, and to be so enthusiastic and so energetic every time I see someone who recognises me from Sex Ed is quite draining, especially because she has the same name as me. It can be quite claustrophobic.

My character, Aimee, is trying to learn how to operate in the world without needing to be liked constantly. She’s trying to retain that joyful, sweet, silly personality whilst also saying it’s okay not to be okay and realising that -and I think actually that kind of reflects me in real life – is knowing that it’s all right not to be on top form. It’s not sustainable. You have to just have some kind of chill, very low-key times.

Aimee wears Corset, What Katie Did

Have you learnt to become your own ally?

I think handing out your heart all the time and giving it to people who don’t really love you because they don’t know you has been a learning curve. It’s about trusting and giving yourself over to the right people and retaining yourself from the wrong. I think it’s hard to differentiate sometimes, especially because of Sex Education, because people come over to you and they tell you how much they love you and it’s a stranger, but they don’t love me. they love the character.

I feel intertwined with the character of Aimee because she feels like her thing that she has to offer is a big house for people to have parties in, and kind of this carefree, easy breezy attitude, and that’s her, and in season two that’s really challenged because she goes through this trauma and it’s like she doesn’t know how to navigate because she can’t hide that she’s sad. So, she just isolates herself because it’s like, “I don’t want you to see me like this because then I’m not a valid person. I’m not valuable.” I think there can be a tendency for me in my own life to do a little bit of that. If I’m not on top form, I’ll be like, “I’ll just hide away. I’ll just hide away because no one really wants to see me like this.” But actually, if they are your friends and they love you, they do want to see you in whatever state.

Your first ever on-screen scene was a sex scene and you said to me last year about it, “I did it with a bang and got my tits out.” How has your relationship with your body image changed in order to be able to film such a scene?

Sex Ed helped me a lot kind of in that aspect of my life because I knew it wasn’t gratuitous and I knew it was always helping the story along. Because I wanted to tell the story as honestly and as well as I could, it kind of gave me that really great push to go, “No, I’m going to f**king do it. I’m going to do it!” It was such a safe environment from the get-go with those sex scenes that it just felt like the perfect opportunity to do a really great funny sex scene but also to challenge myself. I never would have thought in a million years that I will be able to do that. I have suffered with body dysmorphia my whole life. With the masturbation montage, even with all the unflattering angles I thought, “Think of the young girls that are going to be watching this and going, ‘Oh thank God, that’s what I do,’ or, ‘we don’t always look perfect.’ I remember before the first sex scene, I thought, “Right, okay. I’ll start eating salads every day,” and I just didn’t. That was such a turning point for me, making that decision to go, ‘Actually, I’m not going to alter how my body looks before this scene because this is how my body looks.’

That helped me so much because I would be the type of girl at the pool party – whilst other girls would just be so confident and they can whip off their tops and they’d be in their little bikinis – who would just be like, “I’m going to wear a tee shirt.” Even when I was at my absolute thinnest, I would still be terrified to ever show parts of my body that I didn’t think were perfect. I think learning that perfection doesn’t exist and that beauty lies in those flaws and those individualities nuances is just the most liberating thing ever, because you’re striving for something that doesn’t exist your whole life.

This goal is completely unachievable because you’re never going to look like what you think perfect is, until you just go, “The way I am is absolutely f**king great.” It’s still a bloody battle because I’ll still see pictures and I’ll go, “Well that wasn’t a flashing angle.” But then I just think, “No!” I’m definitely training myself how to think and go down a positive pathway instead of a negative, because a knee jerk reaction for years was just to berate myself. When I think back now, I was so harsh to myself. I actually wrote on my mirror when I was younger, “fat,” in lipstick so that everyday I’d go to it and go, “Okay, just remind yourself that that’s what you are.”

I think it’s so amazing that you can sit here now and talk about this journey. Now you have been liberated from it, and you should be so proud of yourself…

It is the best, most rewarding thing when I see girls’ comment, “This has helped me so much with my eating disorder. Thank you so much.” It makes it so much more meaningful than just, “Oh, I’m an actor.” I don’t want to be involved in shallow, frivolous, superficial stories. I actually feel empowered now to say, if I see a script, “No. I don’t want to tell this story. I don’t think it’s got a social conscience. I don’t think it engages with the bigger picture.” You can get bogged down with, “I’ve not had a job for ages, so I need to just get money and I need to get whichever job comes into my lap because I’m an actor and my job is to just say yes to everything.” But learning that you have the power to say, “No,” and engaging all the time with the bigger picture and not just your own vanity and your own insecurities, it really just releases you.

I remember my therapist saying to me, “Of course you’re thinking negatively about yourself because you’re thinking about yourself all the time.” Not in a narcissistic way but if you’re analysing yourself and being so critical about yourself, you’re spending so much of your time talking and thinking negatively. You have to turn the cameras out and engage with other people, listen to their stories. Sharing will mean something rather than it just rotting and fermenting in your brain as this kind of stinky poo.

I’m not saying that being fat is a bad thing. I just was writing it on my mirror because it was like a discipline, which is f**ked up. Feeling fat is not a feeling. You can feel full or you can feel bloated, or empty, or hungry, but you can’t feel fat. It’s an adjective. It’s an aesthetic thing. The word shouldn’t be demonised so much. 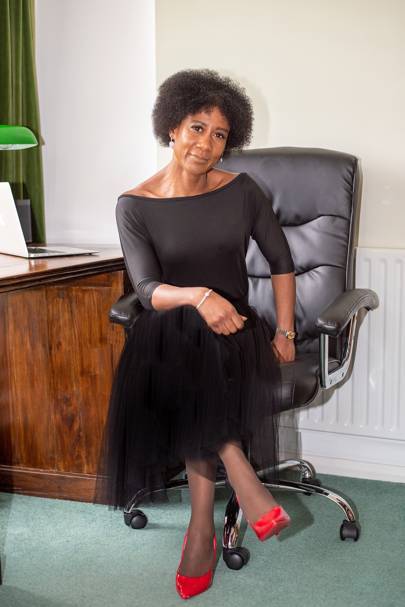 Now do you believe me that racism DID play a part in Meghan leaving the UK?