The FDA has identified one of the farms responsible for E. coli-contaminated romaine that has sickened nearly 100 people and led to kidney failure for 10.

US officials are investigating more than two dozen farms in the Yuma area of Arizona, where 90 percent of romaine sold in the winter is grown.

They have now identified romaine from Harrison Farms as the cause of at least eight cases of E. coli infection in Alaska – but have no idea if the contamination came from the farm, or anywhere else along the produce’s shipping route. 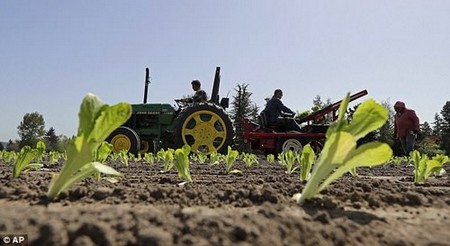 The FDA has traced eight cases of E. coli infection in Alaska to romaine Harrison Farms in Yuma, Arizona but say that all other cases are from another, unknown source (file image)

This particular strain of E. coli produces a Shiga toxin, which can infiltrate white blood cells and lead to clots in and failure of the kidneys, as it has for 10 Americans.

‘It’s difficult for us to say definitively that there’s not a continued risk,’ Wise told the LA Times.

‘It’s important to point out that so far we’ve been able to identify only one specific farm that’s responsible for these eight [Alaska] cases, but we still have a lot of work to do to identify other legs of this outbreak,’ he added.

Harrison Farms is one of many farms in the region that US officials have been scouring for signs of contaminated crops.

Officials have confirmed that eight inmates in an Alaska prison got sick with E. coli from whole heads of romaine from Harrison.

It is unclear whether the Harrison Farms lettuce picked up E. coli in the fields or somewhere else along the supply chain.

But the Food and Drug Administration seems quite certain that ‘the remainder of illnesses in this outbreak are not linked to romaine lettuce from Harrison,’ according to its bulletin.

Instead, investigators are still focused on growers that sell pre-chopped, bagged lettuces, which the were eaten by most people who got sick after eating at a restaurant.

‘The FDA is continuing to investigate the source of the chopped romaine lettuce that caused these illnesses and has identified dozens of other fields as possible sources,’ said the agency’s release.

Now that winter is over, the CDC told the LA Times that romaine season has likely ended in the Yuma region in general – but that doesn’t mean consumers should not be wary of their Caesar salads.

Despite the season change, the CDC will continue to look into other farms, packing facilities and transport routes and vehicles for signs of contamination.

‘We haven’t been able to guarantee that there is no product coming out of Yuma at this point, but given the time of year, the expectation is that harvesting has moved north from the Yuma growing region,’ Wise told the LA Times.

At least 46 of the 98 people sickened by E. coli have been hospitalized by a potentially deadly form of the bacteria, which produces the dangerous Shiga-toxin.

Illnesses have now been diagnosed in 22 states, with new cases found in Mississippi, Tennessee and Wisconsin last week week.

The agency says those infected range in age from one to 88. More than half of whom are female.

Shiga-toxin-producing E. coli is so potent that the Department of Homeland Security even lists it as a potential agent of biological warfare.