Before I shaved my hair, I really liked it! I’m lucky to have easy-to-manage hair and combined with an incredible hairdresser, it always seems to grow out really well. I’d been growing it for just over a year before this and it was just above my shoulders.
I’ve always wanted to shave my head just to see if I could pull it off, and partly to see what it felt like; if it would challenge my image of myself and my femininity. The lockdown seemed like the perfect time, as if I hated it, it would have time to grow out before many people saw me! (Luckily, I don’t hate it. #Spoiler)

I originally had it cut to a Ruby Rose length (short back and sides, long top) in February 2019 and have been growing it out since then – and as I won’t be able to see my hairdresser for the foreseeable future it seemed like the perfect time to start from scratch again.

But I always like to try things at least once, and after having my extremely short pixie cut before, I was always curious to see if I could take it to another level by completely shaving it. I’m also interested in self-image and how our looks effect that, so I wanted to see how my perception of my looks and myself would change when an obvious feminine marker was removed. I’m not straight and while often fem, I also like to dress androgynously at times, and I wanted to see how a look like this would change how I presented myself to the world.

So it just occurred to me one day during lockdown that this would be a good time to challenge myself with it in case it wasn’t for me. I’ve always been bold with my hair and I actually wish I’d taken this final step years ago.

I did it in stages, to help both me and my partner get used to the idea. So I started with an undercut, which I lived with for a few days. I loved this, so it gave me the confidence to go the whole way; I found some good clippers to order online (with longer grading in case I wanted to start out a bit longer), and once they arrived that was it! 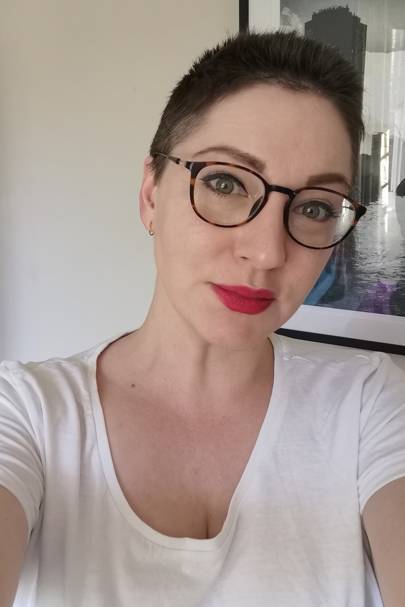 I had my partner do it as he’s cut his own hair before and I wanted to have a few extra millimetres on top compared to the rest. If I had been on my own I probably would have done one length all over, so it was nice to be able to have a bit of flexibility in that – although I had first go with the clippers!

I love the feel of it in the shower; the water on my head is such a relaxing feeling now.

It was a bit of a shock at first – especially the amount of hair left on the floor. You also end up with nothing to hide behind so your face becomes the complete focus. It took me a day or so to get used to it and I really like it now; it’s been a liberating experience and I’m just so happy to have finally done it!

It definitely takes less time and shampoo to wash now. And there’s less hair left everywhere too, which is nice. I also love the feel of it in the shower; the water on my head is such a relaxing feeling now. It’s encouraged me to play with my look a bit more too, in terms of how I dress and what makeup I wear.

My family and friends have been great. Some people definitely had their doubts before I did it and as part of that they were very complimentary about my longer hair – but the same people have said how much the new look works for me. I was also a bit worried about what my partner would think, as was he, but he likes it more than he thought he would. Which does seem to be true. My only regret is that I haven’t done it sooner!

My advice for other women considering doing this? Go for it – hair grows back, and if you’re worried about how you will look you have time to get used to it behind closed doors… but you might be surprised how ready you are to show it off!

This Mother’s Day, team share the beauty advice their mothers taught them