A community of people with invisible illnesses is being forged on social media where sufferers powerfully use their platforms to share their stories and empower others. Billie Anderson, a 23-year-old who has Ulcerative Colitis, is among them. Here, she shares what it’s really like suffering with an illness no one can see… 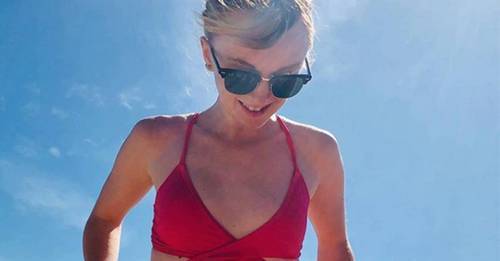 Whether it’s crutches or a wheelchair, when we think about people with disabilities, we presume there will be a visible indication of their illness. However, millions of people around the world are living with chronic health issues that no one can see.

Whether it’s a mental health condition or cystic fibrosis, an ‘invisible illness’ is quite literally an illness that most people can’t physically see.

My name is Billie and I live with a chronic invisible illness and disability.

I was diagnosed with Ulcerative Colitis (UC) at the age of 20. UC is a gut condition that effects the large intestine; causing bleeding, inflammation and ulcers along the colon. Ulcerative Colitis is also under the umbrella term ‘Inflammatory Bowel Disease (IBD)’ and is one of the more well-known conditions alongside Crohn’s Disease.

I noticed symptoms six months before I was diagnosed, but ignored them out of fear. First came bloating and then blood left in the toilet bowl every time I went to the toilet. This persisted for two months before I plucked up the courage to see a doctor. I went through three different specialists and countless tests before I was finally diagnosed. At the time, it was a relief to have some answers, even if I didn’t truly understand how serious the illness was.

At the time of my diagnosis I could barely walk. Because of my out-of-sight, out-of-mind perspective in the lead up to the diagnosis, the Colitis had taken over my body. I was going to the toilet 20+ times a day and was seeing blood every time. I was so afraid of the pain after eating and endless hours in the bathroom, I lost two stone in a matter of weeks. I couldn’t walk or stand on my own. I wasn’t sleeping and would wake up in a cold sweat every hour to rush to the toilet.

Just three weeks after my diagnosis, my doctor admitted me to hospital. I found myself isolated; stuck between my bathroom, bedroom or a hospital ward. At the age of 20, I was supposed to be living my best life at university, but instead I was attached to an IV or being wheeled down for another invasive test. I was angry, upset and felt so alone; like no one around me could ever understand what I was going through. Stuck in hospital for days, feeling like my life was on pause, I took to social media. Instagram felt like my only window into the real world. I started searching for people like me in the hope of finding someone to talk to and stumbled upon a huge community. The more I started speaking to people sharing their experiences, the more I wanted to open up about my condition.

I decided to write everything down and sent it to a friend. She said I should share it, so I did. I began to share every test, hospital appointment and admission on Instagram. Whenever I was put on a new medication or sent for another test, I had thousands of people at my fingertips willing to offer support and advice. We would laugh about the medication side effects, compare hospital horror stories or talk about our favourite nurses. I used to be a very private person before UC, but chronic illness has made me see the power of opening up.

As the months of treatment progressed it was clear the 10+ types of medication I was on wasn’t working. 10 months after my diagnosis and my gastroenterologist made the call for surgery. I was 5 months away from finishing my degree and when I asked if I could finish university before the operation, he simply said “you won’t make it to the end of your degree.” I had 5 feet of colon removed and my small intestine brought through my stomach by an inch with a bag over the top to catch waste. When it came to the surgery, I reached out to the hundreds of people who had been through the same thing. I got advice on what stoma bags to use and the best way to tackle my recovery. The IBD and stoma community on social media has been a lifeline for me. I wouldn’t have been able to deal with my illness or the operation in the way I have without them.

Two years on and I’m still sharing everything about life with a chronic illness and invisible disability. The IBD and stoma community is growing day-by-day and it warms my heart to have so many people from all over the world all coming together with one goal: Help someone with Inflammatory Bowel Disease feel less alone.

Nightingale Hospital and this is what you REALLY need to know

I went to a new-age wellness centre for oxygen therapy

Why being open about our vaginas leads us all to better health, livelier sex and longer lives