On June 6, 1944, 160,000 American, British, and Canadian troops landed along a 50-mile stretch of heavily-fortified French coastline to fight Nazi Germany.

With all eyes upon them and the fate of the free world at stake, the largest amphibious invasion in history began.

Planning for the invasion started in 1943. My grandfather, John Vincent Resig, had completed boot camp training a the Bainbridge, MD Naval Training Station and was assigned to the Navy merchant ship John Brown as a signalman. His job was to man the guns and do the communication signaling.

In February of 1944, my grandfather set out to sea, destination Liverpool, carrying some of the young men who would storm the beaches of Normandy five months later. My grandfather said, “The timing of my going to sea was coincidental with the height of submarine torpedoing of the merchant ships along our U.S. coast, the Atlantic Ocean, North Atlantic. The Germans definitely had the upper hand.”

“We were scared to death! But we had a job to do. I made it back, many of them didn’t. I moved home to Murray, Kentucky and met a young lady who stole my heart. We were married in 1948.”

For years, my grandfather talked of visiting those who didn’t make it back. As a kid, I wondered out loud, “Are they all in one place?” 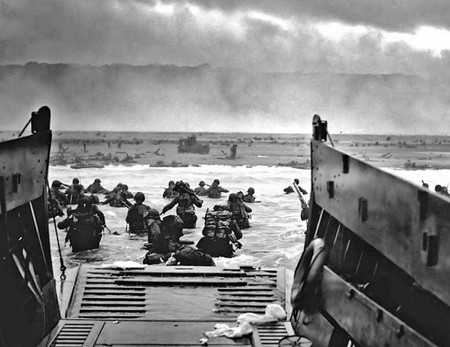 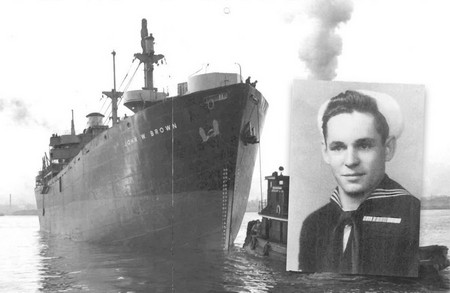 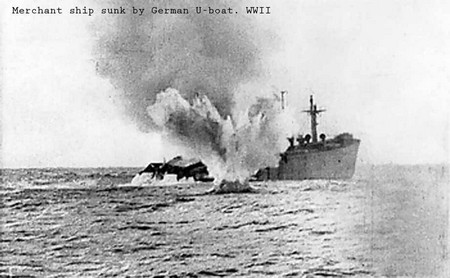 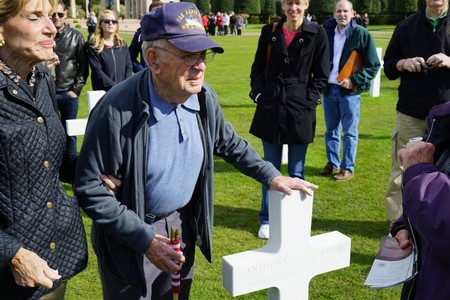 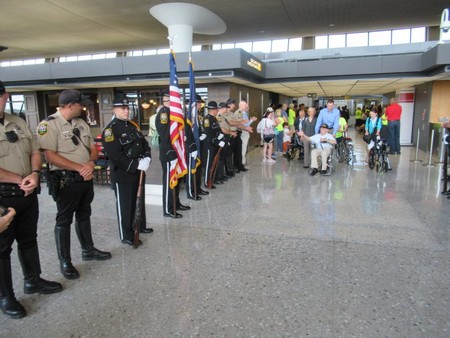 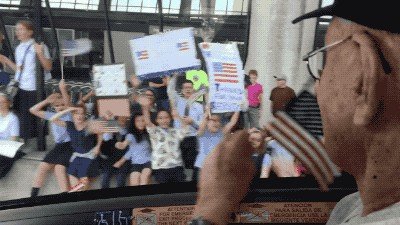 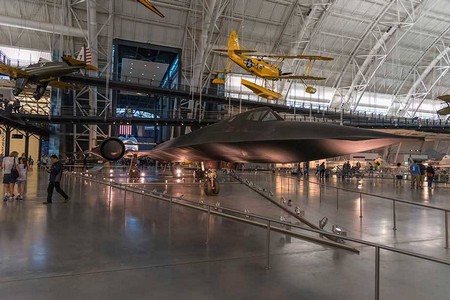 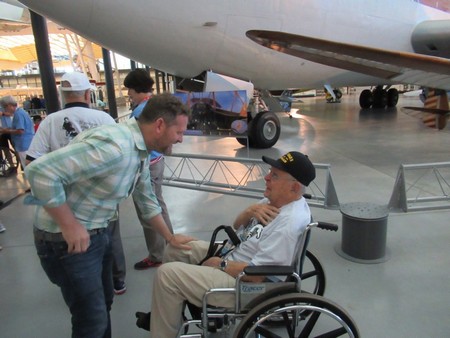 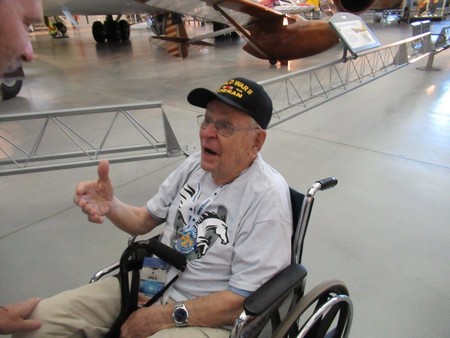 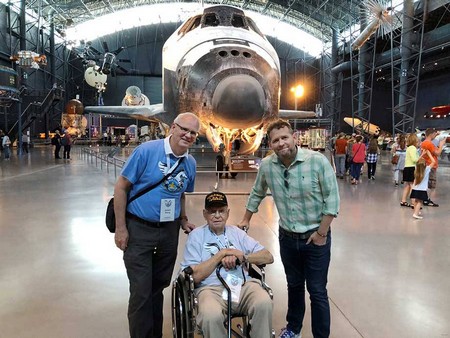 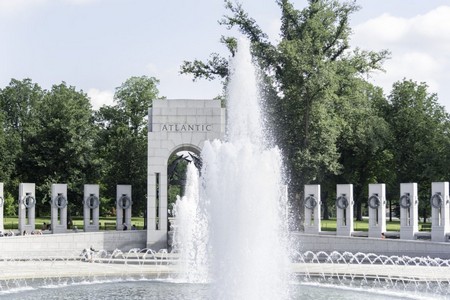 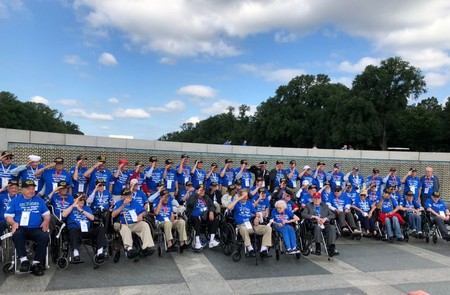 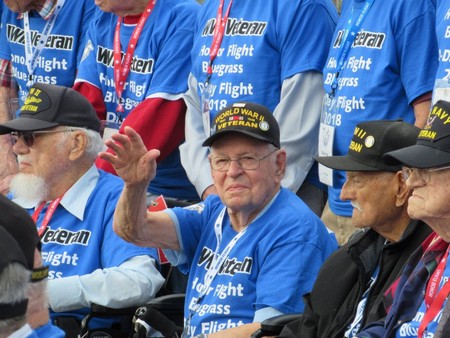 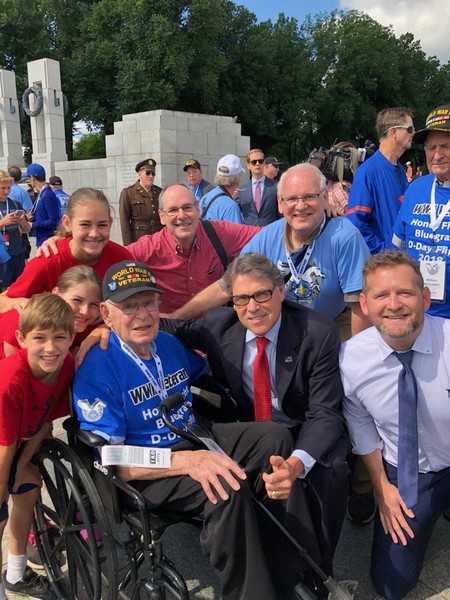 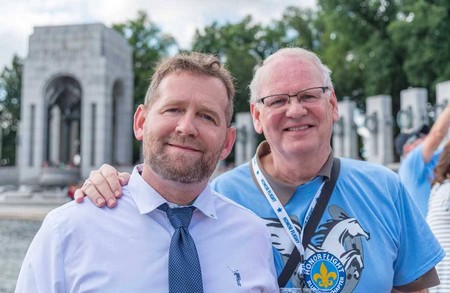 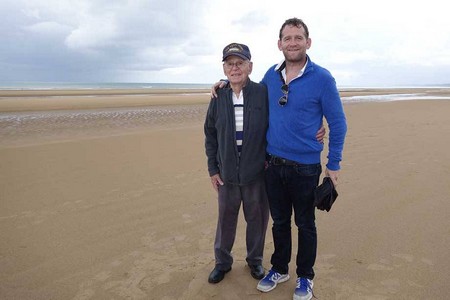 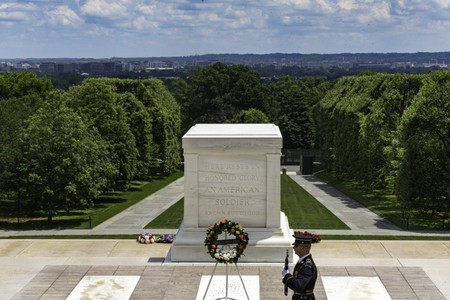 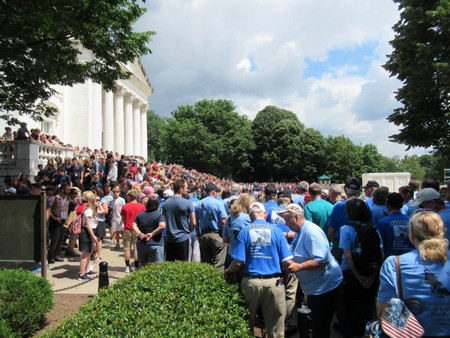 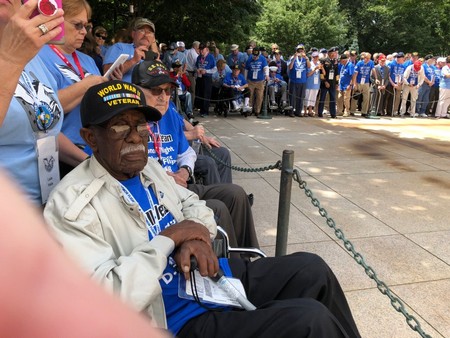 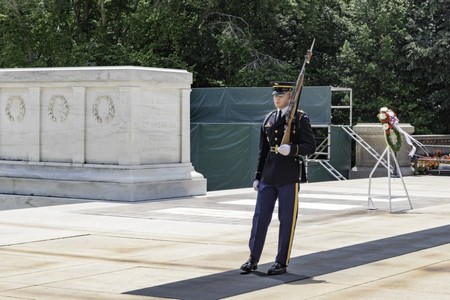 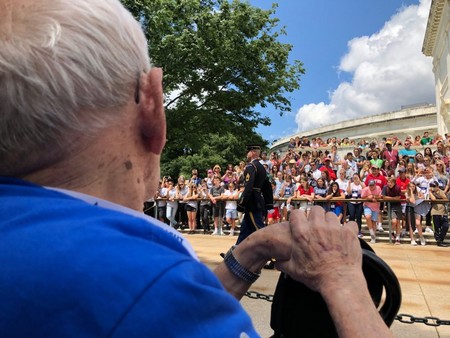 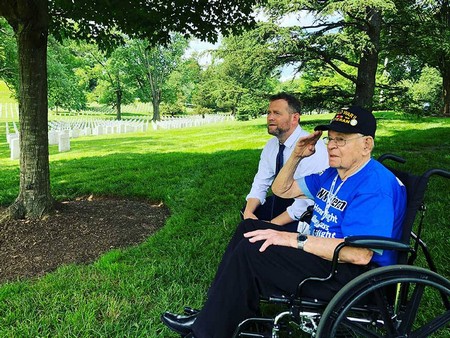 Four years ago, at the age of 89, our family traveled to the Normandy American Cemetery so my grandfather could pay his respects to the 9,387 Americans who gave the last full measure during the Normandy landing.

My grandfather is a very mission-oriented person. Later in life, that can be a very important quality when it comes to longevity. Us civilians call it “having something to look forward to.” If my grandfather has a new mission, he will rise to the occasion to accomplish the goal. So when my father heard about a WWII Honor Flight from Kentucky to Washington D.C. to celebrate D-Day, he signed my grandfather up.

Today, at age 93, my grandfather’s mind is sharp, but his aging body often confines him to a wheelchair. Still, he made the flight. He knew, just as I did, that one more task lay ahead, one more mission.

67 WWII veterans stepped off the Honor Flight to a hero’s welcome in Washington D.C.

Initially, my grandfather was told I wasn’t going to be able to make the trip to D.C.

But I wasn’t about to miss this.

Grandad used to drive his family from Murray, Kentucky, to the Kennedy Space Center to watch the Apollo launches. An engineer by trade, he was fascinated by the race to the moon. Grandad never saw the Space Shuttle launch, so we took him to see it, “That’s a big bird there.”

Eight WWII veterans, all in wheelchairs. In the background is the Enola Gay, the B-29 that dropped the first atomic bomb on Hiroshima, Japan.

At the end of the National Mall is the WWII Memorial, where all the veterans gathered for a group photo.

Of the 98 WWII veterans who signed up for the Honor Flight six months ago, 67 made the trip. There’s no need to explain why. In a few short years, moments like this will fade from reality to a memory.

Secretary of Energy Rick Perry showed up to surprise Grandad, as did my Uncle Phil, Aunt Jo Anne, and their kids! Secretary Perry’s father, Ray Perry, was a WWII tail gunner on B-17 bombers, who passed away in April of 2017. Thanks for showing up, Gov, you made his day.

My father couldn’t have worked harder to make this trip possible for grandad. From sunrise to sunset and all the wheelchair pushing in between, some heroes don’t wear capes.

Leaving the Memorial, so many people stopped to thank my grandfather for his service. It meant more to him than you know. Look at that smile.

Four years ago on Normandy Beach, my grandfather told me he felt like he had more gas left in his tank. He spoke of one more cemetery he felt compelled to visit. That maybe someday, if he lived long enough, we could pull it off.

The Tomb of the Unknown Soldier, Arlington Cemetery.

Thousands packed the memorial, not only to view the ceremony, but to get a glimpse of the WWII veterans they knew would be coming to commemorate D-Day.

There was still one last thing to do, a pact made between myself and my grandfather back on Normandy Beach.

On the 74th Anniversary of D-Day, my grandfather checked one more thing off his bucket list. He wheeled himself out on the lawn overlooking Arlington Cemetery, high on a hill under the shade of a sugar maple tree. He saluted his brothers, and all those who gave the last full measure on June 6, 1944. Mission accomplished.

Thanks to the Greatest Generation and to all of you who have served our great country. 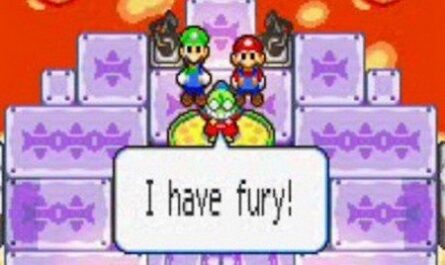 This bear who chilled in a hot tub, drank a margarita, then took a nap is summer goals 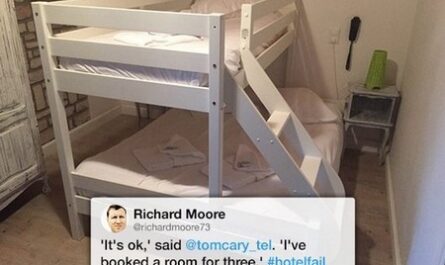 Stay at that hotel, it’s a great deal, they said…