Boots are without a doubt that one style that never loses favour in the fashion world; they can be dressed up via a floral midi dress and puffer coat or toned down with jeans and a chunky cable knit.

Lockdown is officially over (finally!) so as well as reuniting with friends, family and your local pub, it’s time to get reacquainted with actual clothing. Yes, we’ve become incredibly attached to our tracksuit bottoms and UGG slippers too but there’s just something exciting and productive about getting dressed in the morning again.

As you’ve probably noticed, the British weather isn’t exactly playing ball right now so along with a trusty coat that’ll last you through to Spring, a good pair of boots should be at the top of your shopping list as you indoctrinate yourself into the real world again.

But which trends are set to be huge for 2020, and – more importantly – which will stand the test of time? After all, a good boot is an investment, and one you want to be reaping the rewards of for years to come. 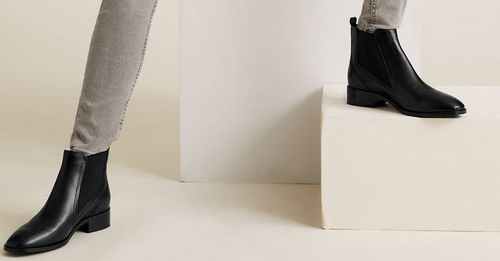 We’ve rounded up a great selection of the best boots for the season ahead in this handy guide but we’re also keen to delve into exactly which styles are selling like hot cakes in store – and no other store knows how to create a bestseller quite like M&S does.

The high street stalwart has reopened its door ahead of the pre-Christmas rush and there’s four key styles of boots flying off shelves. More on that later.

So what’s so special about M&S’ boots collection? “Our women’s boots are all about subtle finishing touches,” say the store’s buyers. “Find gold-tone and silver-tone buckles that catch the eye, as well as detailed stitching. Chelsea shapes with a contrasting sole add an extra twist to formalwear, while Western styles bring casual flair to weekend outfits. Try an all-black option with bright zips for a biker-inspired look.”

Basically, there’s a style for everyone. So which ones is everyone buying? Without further ado, here are the four boot styles flying off shelves at M&S…

Kate Middleton is a huge fan of high street fashion