A baby born with Down’s syndrome, three heart defects and a stomach defect is celebrating her seven-month birthday on Tuesday.

When Kitty Witaschek was born in Boston, Massachusetts, in September, her mother Bonnie was terrified that she wouldn’t survive outside of the womb.

During her pregnancy Bonnie had felt as though the bad news wouldn’t stop coming, from the Down’s syndrome and heart defect diagnoses to the realization that the unborn baby’s digestive tract wasn’t fully developed.

Several months later the 36-year-old mom is proud to share the story of how her ‘magic girl’ battled through two open heart procedures, an intestinal surgery, a near-fatal seizure and heart failure, all while keeping a smile on her face. 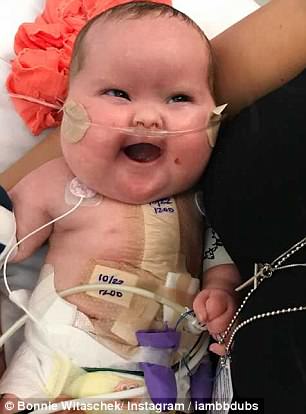 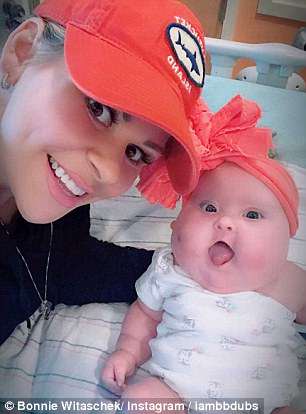 Kitty Witaschek, left, is turning seven months old on Tuesday. The infant, pictured right with her mother Bonnie, was born with Down’s syndrome, three heart defects, an intestinal defect and an endocrine disorder in September 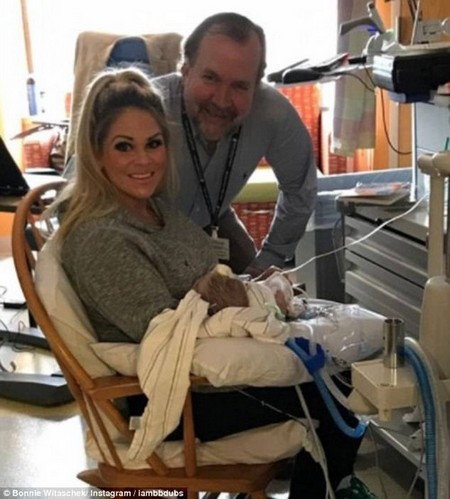 Bonnie, 36, and her husband Mark, pictured, learned that their unborn baby had Down’s syndrome halfway through the pregnancy last spring

Bonnie went in for the 20-week ultrasound in April with her husband Mark and their three sons, two in their teens and one that was one-month-old at the time.

The tiny room was cramped and hot so the kids stepped outside, at which point a doctor came in and told the parents their unborn baby had a problem with her heart.

‘We were so blindsided, we had no idea what questions to ask,’ Bonnie wrote in a blog post for Love What Matters.

Ten days later a test revealed that the baby had Down’s syndrome, a genetic condition that typically causes some degree of learning disability and certain physical characteristics.

The chromosomal birth defect occurs in one per every 700 babies born in the US and commonly occurs with heart and intestine problems.

The defects make it difficult for her blood to circulate oxygenated blood through the body.

‘I decided in my mind there were no more defects, and carried on with everything else I had to deal with,’ Bonnie wrote. 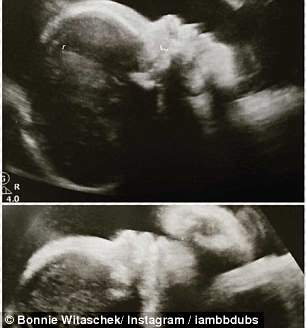 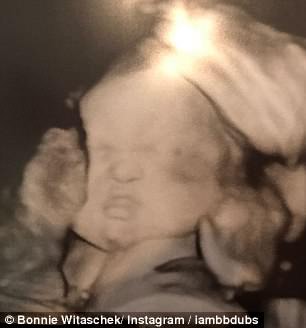 Bonnie, a mother of four, said she felt blindsided by the news that her baby had heart defects and Down’s syndrome. The ultrasound scans are shown above

‘This child will have Down syndrome and will need open heart surgery between three to five months after birth. That was more than enough to deal with.’

The 32-week ultrasound revealed that the baby’s digestive tract was underdeveloped and her stomach bile wouldn’t pass, meaning she would need to have a tube inserted immediately after birth.

‘I’m pretty sure I cried on the way home,’ Bonnie wrote of the day she had the 32-week ultrasound.

‘Sometime afterward, I was having computer issues and while walking to my husband’s home office for help, I lost it. That was my last straw.

‘Before I could fully make it into the office, I smashed my computer on to the floor and stomped on it over and over again screaming and crying.

‘Picturing myself in that moment now brings tears to my eyes.’ 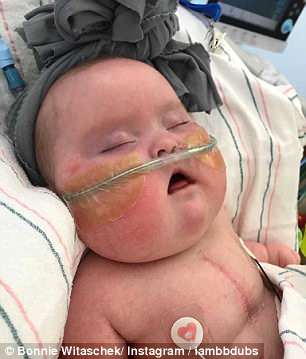 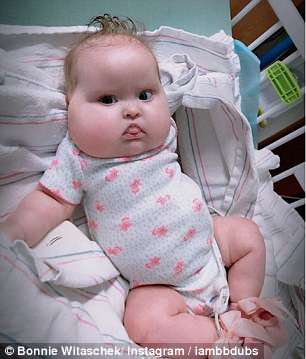 Kitty underwent two open heart and one stomach surgery before she was five weeks old. Bonnie said waiting for the baby to come out of each procedure was exhausting

She was also diagnosed with Congenital Hyperinsulinism, a condition that causes low blood sugar

A few weeks later Kitty was born on September 3 at the Boston Children’s Hospital.

‘When she was coming out, I had this striking fear that she wasn’t going to live outside the womb. I started praying really hard for her to live,’ Bonnie told People.

‘But the moment she came out, she was strikingly beautiful. She was so strong and her eyes were so alert and she wanted to see everything in the room and I was in amazement of her.

‘At that very moment, I decided she was going to be fine.’

During her first five weeks of life Kitty underwent two heart surgeries and one stomach surgery.

‘It was like watching a silent film. I was outside of my body. I can’t imagine that I even breathed during that time, waiting to hear that she made it out,’ Bonnie said of the surgeries.

‘Waiting in the waiting room, whenever I saw blue scrubs coming around the corner my heart would stop and I’d clench the arm chair. But she came out of it beautifully and I have a picture of her looking around and blinking at five weeks old. She’s so strong. It’s like nothing even happened to her.’

Along with the heart defects and stomach defect Kitty also has Congenital Hyperinsulinism, a genetic disorder that causes low blood sugar.

Bonnie has been documenting the baby’s journey on Instagram. She said: ‘I can’t stop sharing. I am in awe of her. I will share her every day of my life’

She has spent the first seven months of her life in the hospital where Bonnie says the doctors and nurses have fallen in love with the little girl.

‘She is bubbly and smiley and she loves attention. She’s never cried much in her life,’ Bonnie said.

Kitty is expected to be in and out of the hospital throughout her childhood, but her mom says the family is trying to stay optimistic.

Bonnie has been documenting the family’s journey on Instagram.

‘She’s just strong, she’s incredible. And she likes to entertain and smile. She likes to hang out with the girls. She’s brought so many people together in prayer.

‘I can’t stop sharing. I am in awe of her. I will share her every day of my life.’ 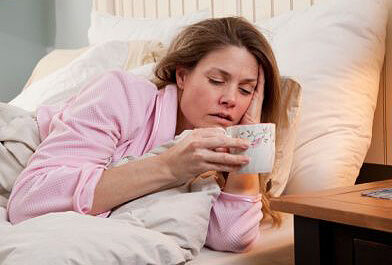