The methods used to find a romantic partner have changed over time. From barn dances and chance meetings in bars to – unfortunately, in some cases – the rise of the formidable dating app scene, the human race can get pretty creative in its mission to cultivate romantic chance.

But what about using what’s written in the stars? Recent research from dating app Hily found that 70% of women say zodiac compatibility – information like a potential partner’s birth chart and star sign – is important to them.

In the US, an astrology-based dating app named Struck – which matches users completely based on their signs and charts – even launched last year. You can also easily add your star sign info to your profile on the old favourites, like Tinder and Bumble – the latter even gives you the opportunity to filter what zodiac signs you want to match with. According to research by Bumble, more than 1 million people in the UK have added zodiac information to their profile.

For Hayley, a 29-year-old Libra, her star sign’s trademark characteristic of indecisiveness is eased by taking zodiac compatibility into account when she’s dating. “It’s helpful to know yourself and your star sign, as well as what typical personality traits your potential partner’s star sign has,” she says. “For example, in my experience and research, male Capricorns are prone to narcissism and manipulative actions, therefore I stay away from that sign, to avoid these negative behaviours.”

Tatyannah, 25, swears by using birth charts – which use the exact moment of your birth to work out the positions of various astrological elements, and how this will impact you. She views them as a “cheat sheet for getting to know someone deep down inside”. 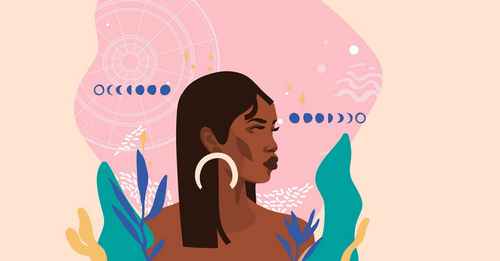 When she was casually dating her now boyfriend, Tatyannah put this theory into practice, citing astrology as a huge part in giving her the courage to make things official with him. She recommends birth charts as a way of giving “general insight about what may turn someone on, what values they hold, how they communicate, and what is needed to create a sense of balance in your relationship with them”.

“I’d like to think of using birth charts as an unconventional yet handy resource to get insight of things that aren’t immediately visible, and a way of getting to really know a person before the more vulnerable parts of them are revealed,” she adds.

So why has using a partner’s zodiac identity become something of a dating trend? “People picking partners or dates based on these signs has become more popular because there is less trust in the algorithms of dating apps, as well as less of a key sense of what ‘works’ when it comes to picking a partner,” Nichi Hodgson, dating expert and author of The Curious History of Dating: From Jane Austen to Tinder, says.

“That ineffable ‘chemistry’ is so hard to find that women are turning to more spiritual guidance for a steer,” she adds. “It can feel in 2021 that the universal odds (given what we’ve just been through with Covid) are stacked against you – so why wouldn’t you consult the zodiac to help?”

There can even be a certain amount of nuance here, when it comes to how much you use the zodiac signs on your dating journey. Ally, 22, says that while she doesn’t base her love life choices completely on a potential partner’s zodiac profile, she likes to use it to assess her options. “One of the prompts on my Hinge bio is ‘let me guess your starsign’ she says. “More than anything, it’s a way to weed out people who aren’t open minded.”

When she’s interested in someone, she always asks what their star sign is, and any scepticism can be chalked down as an unwillingness to embrace new ideas. She feels wedded to some specifics, though: “I know that I’m compatible with Pisces traits, so definitely feel more drawn to someone if they openly say that’s what they are,” she says, emphasising the importance of a potential partner identifying with the zodiac.

Ally agrees with Tatyannah that working things out from someone’s birth chart can be an interesting thing to do if you’re struggling to get a read on the person you’re interested in. “I use them to try and explain or justify someone’s actions based on sun and moon signs,” she says.

“But more than anything, it’s just a good conversation starter and really good fun, because you can really delve into their characteristics with them.”

Georgia, 26, agrees that asking someone whether they identify with certain characteristics attached to their zodiac signs can be a way to spot red flag behaviour or habits in a potential partner.

“It’s a really good way to have uncomfortable conversations and ask big questions early,” she says. “So if you think you want to avoid someone who is emotionally withdrawn, or too prone to anger, you could ask them about these characteristics through the context of star signs, and whether they identify with them.”

Though, Georgia is quick to stress that there are other powerful factors at play in dating, and we can’t expect the zodiac to do all of the work and provide all of the answers. “Oxytocin, known as the love hormone, is f**king powerful. So that’s probably always going to trump whether or not you hate Scorpios, for instance,” she says.

It can’t be denied that there’s been a renewed interest in zodiac compatibility over the last couple of years, and this is for a variety of reasons. “People want to think less practically and more metaphysically when it comes to finding love,” Nichi says, citing the influence of younger generations in changing the landscape of dating. “Gen Z in particular are far less cynical than their millennial counterparts when it comes to astrology. Why not put your faith in a higher power?”

Why not, indeed? If you’re looking to take things further than using the zodiac as a screening process or conversation starter, professional astrologer Heather from The Alchemy Co has some sage advice.

She stresses the complexity of the process, if you’re serious about it, and recommends looking into Moon signs which is calculated based on the position of the moon at your time of birth for compatibility as “this tells us about emotional connection”, as well as Venus compatibility how well your Venus sign gels with your perspective partner’s, which can be calculated using a natal calculator online because “Venus rules our romantic relationships”.

Overall, though, Heather says that birth charts is the key way to work out compatibility. “For instance, dating someone with a lot of air element signs Gemini, Libra, Aquarius in their chart when you’re someone with a lot of water signs Cancer, Scorpio, Pisces won’t give you the emotional connection you seek,” she advises.

So whether you’re using the zodiac as a bit of idle fun, or a way to find a like-minded curious mind, or even as a means of determining who is the one for you, you’re definitely not the only one who’s looking to astrology for answers. May the stars align for all who seek the perfect romance or relationship – as well as those who are looking to break the ice, or simply to avoid a particularly “narcissistic” Capricorn.

We’ve got our first teaser trailer and an update on the release date!

Maisie Williams created her own dress for the Met Gala 2021, and she looks like a gothic goddess

Allow Lizzo to Educate You on the History of Twerking: “Welcome to TED Twerk”