Long before brands like Warby Parker and Toms made it hip to give back when shopping, and the words “fair trade” and “ethically sourced” were deemed selling points, Mitchell Gold and Bob Williams founded a company rooted in a strong moral ethos.

Since 1989, the duo have been quietly serving as a model for fair working conditions, inclusive workspaces, charitable involvement, and political action. In 2013, they published Who We Are, a book outlining their core values and how they apply to the company’s business model. Since then, Mitchell Gold + Bob Williams (or MGBW Home) has continued to grow.

Cofounder and outgoing CEO Mitchell Gold (he’s taking a less intense role at the company so that he can spend more time on the causes close to his heart as well as more face time in MGBW’s stores) has always been outspokenly supportive of social and political causes and – unlike some executives – doesn’t keep his beliefs separate from his business. Instead, he’s managed to create a company that thrives on values of inclusivity, fairness, and equality.

AD PRO sat down with Gold at his SoHo store to talk about how staying true to a company ethos has proved a solid business decision. 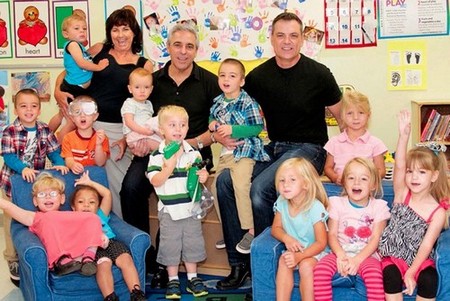 AD PRO: Let’s go back to the beginning. In recent years, touting a company ethos has become a common theme with start-ups, but you saw it as an important part of your business long before that. Can you tell us why it was important to you and Bob from the get-go?

Mitchell Gold: First of all, the reason that Bob and I started this company is because I was working for a really big furniture company that, frankly, was quite bigoted. The way they treated gay people, African Americans, even the customers – it was just crappy. So we started our own company and we just evolved into wanting to do certain things. A perfect example is at this previous company, if you wanted a cup of coffee, they had these vending machines with these little cups of burning hot, crappy coffee, for, in those days, 30 cents – which now would be a couple dollars. It was ridiculous. So when we started our company, I thought, ‘What if we put in Bunn coffee makers?’ We don’t have to make money off selling coffee to our employees. People thought that was incredible. The next thing we did was air condition our factory – because it was hot! We found out that no other factories in North Carolina were air conditioned. So we started getting people to apply to work for us because we had air conditioning, we had coffee. And it just evolved form there. We realized we had employees with children, so we built a childcare facility. And then it was healthcare, which is so important, because when you have absenteeism in a factory, it’s hard to keep production on track. So we said, ‘Let’s get everyone healthy.’ We started an anti-smoking campaign; we now have two health professionals on campus. The thing is, we had to work there too. So we wanted it to be a place we would be happy to work.

Gold and Williams with children at their factory daycare, in an image from their 2013 book Who We Are.

AD PRO: Does the fact that you’re physically in the factory play a big role in how you’re able to improve it?

Gold: Well, we make furniture all over the world. All of our upholstery is in North Carolina, but we also have production in China, Indonesia. But all the factories we work with, we want to make sure they have good, clean environments. I’ve been to all the factories; Bob is there twice a year, and we have a staff who is visiting all the time. Things are different all over, but the places we work with serve meals, they have medical attention.

AD PRO: How does that attitude you have toward the factories play into the workforce throughout the company?

Gold: A good example is our VP of human resources. When we had an opening for that job 20 years ago, he was in charge of customer service. I called him in and told him I wanted him for the job, and he said, ‘I have no experience.’ I said, ‘I know, but you’re an incredibly fair person.’ That’s what I want for our company. I want every employee to know they have an advocate, and that advocate is going to do what’s right and what’s fair. You know what? It makes things easier! We have not had any lawsuits in our 29 years.

AD PRO: A lot of these things you’ve talked about – good working conditions, benefits – are not in place in other places as cost-cutting measures. But it seems that many of these measures, when enacted properly, can actually amount to savings. Have you found that to be true?

Gold: That’s a great and important point. One example I’ll give is being environmentally friendly as a company. We recycle virtually everything. It used to be, when we started, that if we had scraps we would throw it away. Now we sell it to someone who reuses it. So instead of paying for garbage disposal, people come to us and we get paid. We dim the lights in the factory during lunch, which saves money, but we realized the employees love it because many of them nap during the lunch break. Having a daycare on campus, we run as pretty much a break-even, but if we have an employee with a child, and the child, let’s say, bites someone – they go in, and in 15 minutes they’ve sorted it out. If they had to go into town, you’d lose them for a couple hours. And when you’re making quality product, one of the ways you achieve quality is through a consistent workforce. So if you have a labor force that is constantly out, or who are quitting and being replaced, it’s very hard to maintain a quality level. By doing the things we do, we have very low turnover. So financially, though it’s hard to assign a value to these things, there are accounting firms who have compared our factory with others in the area, and we have the highest productivity and profitability per employee. So, though we started doing these things because they were the right thing to do, then we realized, ‘Wow, this really works.’ Originally, for Bob and me – I won’t say we didn’t want to make money, but we just wanted to make a decent living. And then we started doing these things and we found that we made more than we anticipated.

An employee at the Mitchell Gold + Bob Williams factory in a shot from Who We Are.

AD PRO: So to build on that a bit, obviously many of these things are easier to maintain in a small workforce; how do you maintain your values as you grow?

Gold: It’s a matter of constantly working at it. Even, for example, just knowing people’s names. I’m always trying to learn everyone’s name, because that just creates a level of comfort. It also ties into the importance of being involved. You know, I was just talking to our HR rep the other day about someone who was having trouble, and I asked, ‘Has this person been clearly communicated to?’ And then it turned out her supervisor hadn’t been around, and so I said, ‘Let’s give her another chance. And if she’s not capable after that, then fine.’ But it’s a matter of looking at the situation and knowing what’s going on.

Furniture from Mitchell Gold + Bob Williams. All upholstery is made in North Carolina, while case goods are produced around the world, though always in factories carefully vetted by Gold and Williams.

AD PRO: How do these values cross into the customer-facing part of the business?

Gold: Well, one of the things we do in the store is have everyone wear a name tag. Because if someone is helping you and they’re across the room, it’s a lot easier to say, ‘Hey, James,’ than ‘Hey, you.’ And that might be the difference between someone buying another item or not. Or just feeling comfortable! Another thing we always say – and we’re getting ready to launch a line of mattresses – is ‘Just sell it honestly.’ You know, there’s all this competition out there now, with start-ups and whatnot. We were talking about allergies; generally, these beds are hypoallergenic. If you have a latex allergy, you would have to come in contact with the product to have a reaction, but if your customer is really insistent, don’t sell it! We don’t want to push something. And I think that makes things easier.

I also love to do events in the stores. A few weeks ago we had 25 people for lunch at King of Prussia – designers, builders, customers. I love getting the chance to talk to the customers like that. That’s part of the reason we’re hiring a new CEO. I don’t want to do another budget – I want to interact with people.

AD PRO: You’re involved in many charitable and political causes that are personally important to you but bleed into the company. Can you talk about how those go together?

Gold: Obviously I’m very passionate about LGBT people having full equality. I love animals, so we’re very involved with the Humane Society. I’m on the North Carolina Child Care Commission, which is the watchdog over the rules and regulations of early childcare in the state’s daycare centers. Mostly, it breaks my heart that there are kids who are being told by their families, churches, communities, that if they’re gay, they’re sinners. Or there are kinds who aren’t gay, who are being taught this, and that’s what creates bullies. I’m also involved with the Tyler Clementi Foundation, which aims to end bullying. With Trump being such a bully, I think there are some people who look at that and perceive it as strength.

Williams and Gold enjoying a ping-pong match at an in-store event.

AD PRO: We’re in an interesting era where a lot more companies who weren’t always political are taking a political stance. Can you talk about how you view your political views in the context of running your business?

Gold: Well, first of all, I think it’s in my DNA. I couldn’t live with myself being quiet, and neither could Bob. When Bob and I started this business, our original idea was to have 20 or so customers, a nice little $5 million business, we’d work four days a week, and if it didn’t work, we’d do something else. So for us, it was never about making a gazillion – we’re not under that much pressure. So if someone doesn’t want to buy my furniture because of my politics – because I care about LGBTQ people, poor people, about equality – then don’t buy. They don’t deserve our furniture. I think businesses are very much leaders in policies, because they want the best employees. If you want the best employees – or the best country – you have to have equal opportunity. I think one of the reasons we have so much talent is that anybody in the company knows they can become CEO. I also want to make it a point to be sure my non-LGBT employees don’t think, ‘Oh, Mitchell and Bob are gay, they’re going to favor gay people.’ Everyone has equal opportunity. 7 Spectacular Amsterdam Houseboats You Can Rent on Airbnb Tommy Hilfiger’s Former Estate in Greenwich, Connecticut, Is Back on the Market for $6.75 Million