Their ancient teachings have proved fruitless for millions who find themselves homebound, taunted by their mirror images – brushing their teeth in the morning, trying on different pairs of sweatpants, and staring back at them from Google Hangouts and FaceTime interfaces.

As stay at home policies were enacted across the globe, Zoom’s popularity alighted high above the fluffy clouds of Olympus, to about 300 million daily meeting participants. Hundreds of millions of people staring at their reflections through a sandstorm of pixels every day!

Imagine if Narcissus never made it to the proverbial pond in which he succumbed to his mirror image, because instead, on the way, his manager intercepted him and informed him that due to an escalating global pandemic, he would be working from his home indefinitely, in order to respect social distancing guidelines put forth by Mount Olympus’ bureau of public health.

So Narcissus went home, where he became obsessed with a man who he saw on the video networking app Zoom, and, endeavouring to join this familiar and handsome stranger in his world, Narcissus succumbed to the glow of his laptop screen.

It had not been a stranger in his video feedback, but Narcissus’ own image reflected back at him. The Fates, satisfied with the ironclad logic of their parables, celebrated with homemade sourdough bread.

In the great wide Before, the mirror was a place for infrequent communion with my Bizarro self, and always for a particular reason, like to put on eyebrow makeup or inspect my neck. Now I’m confronted by my image when I go to spend time with my family, drink with my friends, play games, hear my baby niece sing that Frozen song, make money to live. As a side effect of the current health crisis, and perhaps as some fulfillment of an ancient witch’s curse, I have become trapped in the mirror realm. I hate it here, and would like to leave! 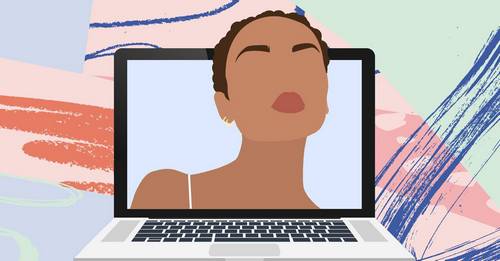 Mirrors provide the foundation for human self-identification. A human baby won’t recognize its own mirror image until 18-21 months on Earth, according to Diana Reiss, a psychologist and professor at Hunter College. Reiss’ research gleans insights about animal self-consciousness through their interactions with mirrors. (The mirror is “a very simple apparatus that can give us reflections of the animal mind,” says Reiss.) Humans exhibit mirror self-identification usually after they are socialized. At just shy of two years old, they are able to distinguish between themselves and others.

The cursed mirror has accompanied us throughout human history – references to the looking glass have been found in Egyptian, Greek, and Roman art. Around 1330, “mirror” as a noun appeared in writing for the first time, denoting both the object in our homes today as well as an occult object – a “magic mirror” – that was seen as a bridge between two nearly identical but disparate worlds: Ours, and Another.

The mirror is just as arcane today: The majority of Americans have at least one mirror in their house, but if asked for an in-depth explanation of how exactly mirrors work, would likely be unable to describe the path of light as it ricochets off of an object and then off of a reflective surface and directly into your eyeball at a bewilderingly fast speed.

Mirrors are also capable of being rude: Despite their reputation as reliable narrators, most mirrors trade in deceit. Even the kindest mirrors will display their world backwards and at about half the size they appear in real life. The only honest mirrors in existence are about the size of a canape plate and can be found affixed to the sides of vehicles in the United States. In a font no shier than 14 points large, they plainly state their shortcomings.

From her practice in Wellesley, Massachusetts, Sherrie Delinsky does battle daily against the dishonesty campaign of the household mirror. Delinsky, a psychologist who specializes in perceptual disorders like body dysmorphia, conducts clinical work in which she asks patients to describe their appearance in the mirror using only neutral assessments. In the local dialect of this particular corner of greater Boston, a shoulder is not weird or bulging but “rounded, spherical;” pores are not so huge that they could host a dip party in which everybody brings a dip and the person with the best one gets to slide down that enormous beak you call a nose, but they may “exist in higher concentration” around your “prominent nostrils.”

In other words, the mirror realm can be a safe place to learn about how you look, but the journey there should be guided by a board-certified sherpa, like Delinsky, who can point out pitfalls and poisonous snakes along the way.

Besides: Our image of our selves is not merely a mirror one, says Delinsky, but is cribbed from a lifetime of memories, hundreds of thousands of photos and videos and mirror encounters. As humans age, a gulf can open up between the image in the mirror and the image we have spent our lifetimes carefully sketching. Both Delinsky and Reiss mention anecdotes of older persons whose mental image of how they look is often at odds with the person they see reflected back at them. (We also tend to think we’re hotter than we are, according to a 2008 study.)

“You look at somebody as a whole, their features, their face, their body language, the tone and sound of their voice, their mannerisms,” qualities that are missing from a static image, Delinsky says. And how one person perceives another is a dynamic process, constantly mediated by a variety of factors, ebbing and flowing like the tide.

The rest, for better and for worse, comes from the observations of others. If you insist on knowing what you look like, simply ask a friend or lover. “It can be useful to pay more attention to the feedback you’re getting from other people,” says Delinsky, “especially if it’s consistent.” The problems with this tactic are that 1) Requesting constant feedback on how you look can be a grating exercise for your friends, and 2) Their responses will probably be mediated with how they think of you as a person, whether or not they realize. (Asking a friend “Am I hot?” and having them respond with “You’re so funny!” is an absolutely devastating burn.)

I suppose the solution suggested here is to stop worrying about how I look in the mirror, which I am unfortunately unable to do at press time. When severed from my hot friends and their compliments, the majority of my self-esteem is dictated by the thoughts and observations that occur to me when gazing at myself in a reflective surface. And those are not my friends.

There is only one perfect mirror in existence, according to entrepreneur John Walter: The one he currently sells.

Adapting the technology of a non-reversing mirror, Walter’s True Mirror is built using two mirrors placed at a right angle and set in a shallow box frame. To the beholder, the resulting presentation feels less like a mirror image than if you had encountered your clone face to face.

Walter describes the genesis of his mirror, when, in his 20s, he was confronted with his reflection in a bathroom while deliriously high on marijuana. “When you look in a mirror, your face is altered – not just physically but informationally. The way you present is altered by being backwards. We believe what we see, and there’s nothing more intense about seeing yourself in a mirror, and looking different.”

Wonderful. Just to recap: Every mirror I have ever seen has lied to me about how I look, except for one that costs over one hundred US dollars. But what about my computer’s camera, which offers another type of mirror to stare at all day?

I set off to find out how a webcam works, only to discover that the arrangement of words defining how our mirror images are rendered on screen appeared to me as merely a long set of vaguely familiar hieroglyphs. I believe light from Heaven bounces off of your face and into the web camera, where it is somehow translated into the language of computers, able to display your face back at you. Then I collapse onto my knees and thank God that I am not a technology journalist.

Where webcams fall short of portraying real life, explains Zoom’s chief technology officer Branden Ittelson, is capturing and correcting for lighting, especially in low-light environments, like an old apartment or a deep-sea grotto. According to Ittelson, the better one can light an image, the more flattering the result.

Zoom has included a feature to protect precious human vanity: A “touch up my appearance” option that diffuses webcam footage slightly, blurring a cheek’s full of ascendant pimples into a creamy glow. Otherwise, the app merely broadcasts the image captured by your laptop camera or iPhone.

“In terms of video, that’s one of our core focuses, how to build a great video experience and make it fluid and really represent the image,” Ittelson says. Zoom’s contribution to the technology market is their proprietary video compression, which constantly optimizes display by averaging out each participant’s video quality. Prior to Zoom, Ittelson worked for the Department of Defense, “creating, implementing, and supporting various global identity management systems,” according to Zoom’s website. The company’s goal is “frictionless” conversation, indistinguishable from a real-life office meeting, which is known for being frictionless.

Cameras that distort images can be psychologically risky, according to Evan Rieder, a dermatologist and psychologist at NYU Langone. “Digital cameras, which I believe function as the contemporary mirrors of convenience, if held too close to the face, are notorious for distorting and warping people’s facial features, leading some people to embrace a distorted self-image,” Rieder says, adding that these patients might be more likely to consider cosmetic surgery. “I am constantly telling my aesthetic patients to get rid of their magnifying mirrors. They allow us to obsess over minutiae that are invisible or tracely apparent to the naked eye.”

For our interview, Ittelson did not employ use of the Touch Up function. Instead, he called from a humble but intricate home set – the edges of a green screen flickering against a basement wall, a team of lights illuminating his cheekbones – and zoomed his camera in slightly, manipulating relative distance to soften the angles in his face. He looks neither more real nor more fake – just very good.

Keep Your Bikini Line Smooth With These Ingrown Hair Tips

Style everyone will be getting in 2021