The annual report by The Commonwealth Fund, a private foundation that aims to promote a high performing health care system, found that the number of uninsured Americans rose from 12.7 percent in 2016 to 15.5 percent in March 2018.

Four million Americans dropped their health insurance this year as the rate of people with coverage steadily plummets, a new annual survey revealed.

The increase – seen particularly in the south of America – is a turning of the tide after years of decreasing rates of uninsured Americans following the passage of the Affordable Care Act in 2010.

Public health experts warn it could have grave impacts on life expectancy and disease control, as most of those losing insurance are among low-income groups who have the poorest health prospects in the country. 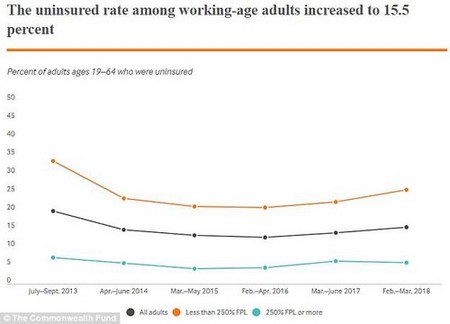 After years of decreasing rates of uninsured Americans, the rate is now ticking up again

The ACA Tracking Survey is conducted by telephone surveys of 19- to 64-year-olds.

The results are based on a detailed analysis, but still may not reveal the entire picture of health insurance in America. The survey can only show who is uninsured, not the definitive reasons behind this.

This year’s report revealed the problem is concentrated among adults with lower incomes.

This demographic experienced a far higher decrease in insurance rates than the national average – a nearly five percent drop compared to a 2.8 percent drop nationwide.

Although the reason for this increase in uninsured Americans is not yet clear, the survey authors laid out various influential factors – singling out some to do with the current administration, but cautioning that there are many others unrelated to Trump.

One of the key issues is a drop in advertising and outreach to lower-income groups, meaning fewer Americans are aware of what healthcare plans they may be qualified to get.

Another is the increase in the so-called ‘coverage donut’ – the gap between coverage, when treatments aren’t cheap enough for low-cost coverage, but aren’t expensive enough to warrant assistance.

Over time, companies have been lowering the cap for low-cost coverage, and raising the threshold for the upper bracket.

Once an individual’s medication costs exceed the limit set by their provider, they will have to pay more for their drugs until they reach a second upper limit, where the insurance will step in once again to help pay for costs.

Originally, the government planned that Americans who did not qualify for subsidies to help pay health insurance premiums would be covered by expanded Medicare.

However, in 2012 the Supreme Court ruled it was voluntary, not required, for states to expand their Medicare programs to support this.

Previous studies have noted the effect that fewer Americans with health insurance will have on US public health.

In addition, uninsured patients generally have less positive health outcomes and are more likely to die prematurely than those with health insurance, research shows. 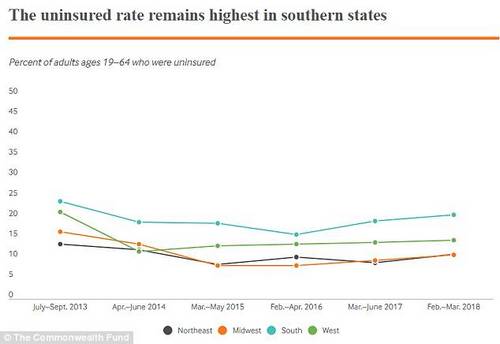 Although the current report did not show where the majority of uninsured Americans live, past research revealed that these groups are most heavily concentration in the south and in the west.

Studies also show that states in the Appalachian region and the American south have the highest rate of disease and illness in the nation.

Experts expect this trend of fewer insured Americans to continue in upcoming years as the fine for not having insurance will no longer exist come 2019.

When dropping these fines, the current administration claimed they want to give Americans more options when it came to their health insurance.

This included the option of whether to not to have any insurance. The new report found that five percent of currently insured Americans plan to drop their insurance once these fines are eliminated next year.

One person killed by E.coli-infected salad