One of the most talked about moments on Inauguration Day was a seemingly awkward moment between Michelle Obama and Melania Trump. But, according to Obama, the moment was more about trying to hold back her emotions than anything else. 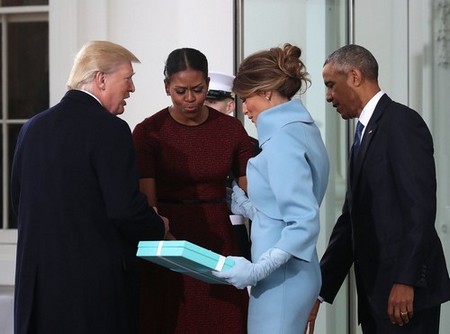 In case you forgot, on Inauguration Day, when the new first lady and president of the United States arrived at the White House, Trump greeted Obama and handed her a gift. The moment was captured by ABC News and showed Obama’s puzzled face as she wondered where to put the gift. The internet was quick to say Obama’s face was a reaction to the incoming Trump presidency. But at the American Institute of Architects conference on April 27, Obama revealed what her actual emotions were. The former first lady said she was beginning to realize these were her last moments in the White House – a not-so-easy moment, especially for her daughters, who grew up there.

“So that moment of transition, right before the doors opened and we welcomed in the new family, our kids were leaving out the back door in tears, saying goodbye to people,” she said at the event. Obama said she didn’t want to have tears in her eyes to avoid any backlash. “I didn’t want to have tears in my eyes because people would swear I was crying because of the new president,” she said, according to Today.

At the conference, Obama told the audience that Sasha and Malia’s last night at the White House involved a slumber party with friends. “They had a sleepover, because of course on Inauguration Day, because my girls are so normal, they’re like, ‘Well, eight girls are gonna be sleeping here because it’s our last time, and we want pizza and we want nuggets.’ And it’s like, really?”

How can you earn on the game Counter-Strike

A visceral history of dinosaurs, the world through the nose of a dog and the psychological secrets of the plot twist: Books in brief