On the seventh day of October, we learned that no one loves Halloween more than Megan Thee Stallion. As soon as spooky season started, the rapper threw a carved pumpkin on her head and spontaneously posed for some photos that have since inspired tons of memes, and now she’s been showing off a new set of Halloween-themed nails nearly every day since.

In just one week, Megan has gotten four Halloween manicures, with her latest one drawing inspiration from Marvel’s Venom and its recent sequel. The design was painted on lipstick-shaped nails and featured a drawing of the alien superhero on select fingers and lightning bolts on the others.

“This is probably my favorite anti hero ever,” she captioned a photo of the “new $et” on Instagram.

Megan started off her freaky-manicure rollout with a white manicure that featured a mix of coffin- and stiletto-shaped tips with bloody designs on her pointer and pinky fingers. 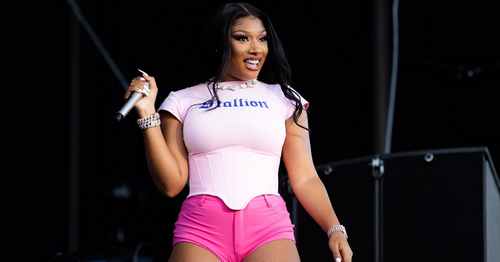 She followed that with a stunning glow-in-the-dark, X-ray manicure before switching things up just one day later with yet another colorful set of nails that was imprinted with zombie eyeballs on each finger.

While every single manicure she’s worn so far is gorgeous, the real star of the show here is her nail tech, Coca Michelle, who’s clearly working overtime to create the spooky-season manicures of all of our dreams. Megan clarified in a post shared to her Instagram Story on Oct. 8 that her new nails aren’t prepainted press-ons, which makes Michelle’s work that much more impressive. Read ahead to check out all of Megan Thee Stallion’s Halloween nail looks so far.

SZA Just Dropped 3 New Tracks, and It’s All Because of Astrology