Jorge Lendeborg Jr rose to prominence with his breakout roles in Love, Simon and Spider-Man Homecoming, but it’s his title role as Bumblebee in the upcoming Blockbuster hit that will see him ascending to the next level. The 22-year-old Dominican-born American actor plays Memo, the awkward teen neighbour of Hailee Steinfeld’s Charlie Watson, in the hotly-anticipated Transformers prequel. 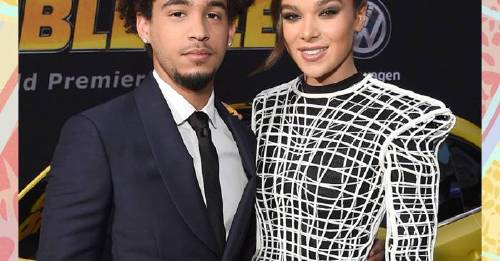 En route to the airport after a fleeting 24 hours at home, GLAMOUR spoke to one of Hollywood’s rising stars about empowering women, working with Hailee Steinfeld and how it feels to be a young man in Hollywood – “like all positive movements… there’s a little bit of unwanted effect for the positive change we’re fighting for”. By all accounts, expect to see A LOT more of Jorge in 2019.

How does it feel to be a part of the Transformers franchise? Were you a big fan of the original films?

Yeah definitely, I was a huge fan. Honestly, I really REALLY enjoy the original movies. I even used to watch the cartoon. It’s definitely a dream come true.

If you were to give your on-screen character, Memo, a dating profile, what would you say?

Before the date, I’d describe Memo as a little bit of awkward nerd but also very charming and very confident.

How do you approach an on-screen relationship in 2019?

The cool thing is, the movie is set in 1987. So as far as what I’m doing and showing, I feel like my approach was a more wholesome version of a guy who finds his girl’s attention and is trying to work his way up there.

What was the vibe like on set of Bumblebee?

It was so exciting to be a part of the big spectacle of movie making. I find it so fun to be in a big studio and see everyone doing their different jobs. I consider myself a fan of the process, so that was really cool. The most memorable parts are the explosion scenes. You can wait all year for fireworks or you can just make a movie and wait for the explosion. It’s way better.

What did you learn from working with Hailee Steinfeld?

She really demanded the camera and was so professional. As an actor, you can feel nervous to speak up and say can I do that line again or make a note because it is so fast paced, but Hailee taught me to make use of everything, to be technically aware and to understand how editing works . It’s about being a collaborative person in the process of filmmaking.

What message in the film spoke to you the most?

The empowerment of young girls and the message that they should be and do anything they feel like. I feel like we do a really good job at flipping the gender characters in these movies. I’m the guy but I’m more of a sensitive type and I have weird hobbies, I’m more eccentric and then Hailey is way more stoic and she into things that are normally considered boy things but they shouldn’t be, they’re for everybody.

Bumblebee can’t speak and so uses music to do so. If you had to choose one song or artist to speak for you, what would it be?

I like this question. I always go forward and back on either Jay Z or Kanye West.

Bumblebees disguise has changed from a camero in the original Transformers to a yellow Volkswagen. What car would you choose as your disguise?

I feel it would have to be a Porsche because it’s such an exciting car. They’re just very cool cars. And it’s a great excuse to go fast.

Bumblebee is in cinemas from 21st December 2018.

Meet the woman who’s had your dream job twice over