A French-born, honorary Brit – she spent nearly ten years in London before moving to New York last year – the 32-year-old is a social media influencer (with 182k Instagram followers).

She raised £1.5million in funding from all-female investors – BBG Ventures (AKA Built By Girls) and Female Founders Fund – that invest in female-led brands such as The Wing and BeautyCon.

Considering recent US figures showed only 2.2% of funding goes to women and just 0.2% of that to women of colour, it’s no wonder Freddie is tipped to revolutionise the market. 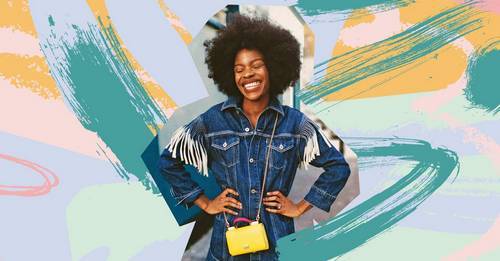 It’s lunch time in New York and despite the fact that Freddie Harrel is unwell – her voice is a raspy echo peppered with sniffles and coughs – she’s upbeat. And right now she has a lot to be happy about.

Woman on a mission

“I was clueless about hair, so there was no strategy,” laughs Freddie, “but everything I’ve done in my life is playing a part in this business – blogging, building my community and my journey to find myself.” Freddie has been open about her mental-health battles despite feeling it’s still culturally unacceptable to speak out about them. “There’s this idea that if you are black and show any kind of weakness then you’re not a real black woman.”

She recalls 2013 as a turning point: “I was feeling really low; everything was too much. I had several people in my head and I wanted to disappear.”

She began seeing a therapist and set up a fashion blog to “channel the different Freddies”. Even so, she says, “I still suffered panic attacks, I didn’t think I was pretty and I hated myself,” so she trained as a confidence coach and set up a workshop called She Unleashed.

It was this “cathartic journey of inner growth” that encouraged Freddie to stop straightening her hair “to fit into what society thinks it should be. I discovered my natural hair and wanted it bigger, so I began experimenting with hair extensions. I saw the negative aspect of the human hair trade in Chris Rock’s Good Hair, so it had to be synthetic.” She found a supplier in Asia and her followers began asking where they could buy it. “I thought, ‘I could actually launch a business.’”

Those who follow Freddie will remember Big Hair No Care – the successful but short-lived extension brand she set up in 2017. “People started requesting more styles. I couldn’t keep up. I wanted to relaunch, but it had to be different. And bigger.”

That something bigger is RadSwan. But initially, the thought of launching it terrified her: “I realised I’d need at least £1million.” Her friend Michelle Kennedy, founder of motherhood app Peanut introduced her to a US-based investor. She DM’d another on Instagram, then headed off to New York for meetings. Within three days she’d got the money. Ka-ching!

Though it’s been an incredible time for Freddie, she admits it’s also been the hardest period of her life. “I don’t know if I’m moving mountains, but I feel like I’m definitely pushing them.” Her goal is to “bring about a revolution”.

Dubious ethics are rife in the hair-extension industry, as is poor quality. RadSwan promises to be different; high quality, affordable, socially conscious, while also tackling issues around the politics of black hair. “I am so tired of hearing that wearing wigs is rooted in self-hatred and wanting to be white,” says Freddie. “Just because you wear extensions doesn’t mean you don’t love yourself.

I think it’s time we had those wider conversations.” It was through a conversation around self-love that Freddie stumbled upon the brand name. “I was doing the Instagram ten-year challenge. I posted my photo and opened up about my early issues with self image, and how I have now blossomed into the ‘raddest swan’. And it stuck. So many of us have been made to feel like the ugly duckling and now it’s time to celebrate ourselves. We all have an inner rad swan.” Which, despite her feeling under the weather, describes Freddie perfectly.

They’re the self-gift you deserve for dealing with 2020

Textured skin on a tight budget

The biggest haircut trends that will dominate 2021