I’m honest on Instagram – not crying my eyes out in a dark room, honest – but what you see on my feed is me, just a little bit magnified. However, there’s one image I posted in July 2018 opposite where the glamour wasn’t real. Where the story behind it was so painful, I just couldn’t share it. Until now.

Even A-listers can be guilty of #LivingTheirBestLife on Insta, when IRL they’re a blubbering mess. For GLAMOUR Unfiltered, Queer Eye’s Antoni Porowski gets real about the searing heartbreak behind his hottest photoshoot.

The picture was taken on a shoot for a men’s magazine, just days after my seven-year relationship with my boyfriend Joey ended. And while everyone around me was working to make the shoot as incredible as possible, I felt broken inside.

I first met Joey in 2011 and, even now, I feel that fate brought us together. I spotted him one morning on a New York subway. I’ve never done this before, or since, but I moved nearer to him, just to get a closer look. He got off before I could speak to him.

I thought about him all day. Then, that evening, a friend came to see a room in my apartment, and asked if he could bring a friend along. It was Joey, the guy from the train. Within minutes of him showing up on my doorstep – I know this sounds crazy – I was in love. I said ‘I love you’ within four or five days. 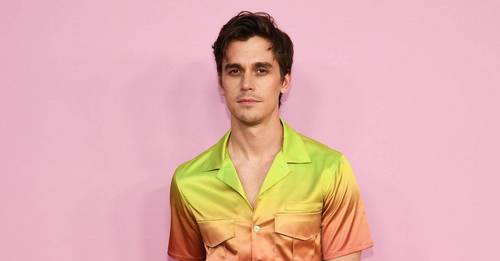 Joey and I had a great relationship, for the most part. He taught me about unconditional love. And he and his family taught me what a family could be like, as I come from a pretty dysfunctional one. And while I am close with most of my family today, I wasn’t when I was growing up.

The problems started after Queer Eye came out. Everything exploded overnight. Previously, all the energy in my life was focused outward: I was looking for a job, I was looking for validation. Then suddenly, everything was coming to me.

I didn’t have much confidence growing up and always tried to make others happy, at the expense of myself. Suddenly everybody was asking me, ‘What do you want? What do you like? What makes you happy?’

A friend who’s in the public eye told me: ‘In your first year of celebrity, don’t do anything major; don’t get a dog, don’t start a relationship, don’t end one, don’t buy a house, don’t sell it.’ In the end, I did the opposite, telling myself that I needed to be alone. I chose flight over fight and broke up with Joey. I was overwhelmed by my new life.

At this point, I was working 14-16 hour days, six days a week, filming, working on a cookbook and endorsement deals. Then each week, Sunday would hit me like a ton of bricks – I’d take a bath and cry for an hour. But I put on a brave face, as I was in the middle of filming the second season of Queer Eye. If I’d have let myself cry at work, it would have been a mess for production.

But there were some difficult moments at work. I broke down filming the first episode of season two, with our ‘hero’ Tammye (below), who spent her life putting the needs of others before her own. When we entered her house, she looked at me, pointed at my face and said, “Everybody calls me momma, but you especially need to call me momma.” I fully lost it. It was one of the most emotional weeks of my life. She echoed how I’d felt my whole life and how I was feeling in that moment: I needed family. This perfect stranger saw right through me.

Luckily, I have the boys – we’re all there to lift each other up. They’re the brothers I never really had. I also didn’t have gay friends growing up and I’ve never been one for PDAs, but when Tan and I are together, we hold hands with our fingers interlocked, I’m like a monkey holding on to him.

One night during filming, Tan saw that I was a blubbering mess and said, “We’re driving to this Pakistani restaurant called Ziki. I’m taking you for dinner.” It was exactly what I needed.

To be honest, I’m still moving on from the break up. I’m a very co-dependent person and I’ve been working on it in therapy – going up to a couple of times a week. I now ask myself, ‘What am I doing today for that little moment of self-care?’

I had a moment, too, when I did a video with Gwyneth Paltrow at Goop. People were coming up and telling her what else was happening that day. She looked up, closed her eyes and said, “I am only one person.” I got chills thinking about it because it’s totally true. I use that as my mantra now and as a reminder not to put extra pressure on myself.

Ultimately, the past 12 months have taught me that everything passes – the way you feel now is not how you’ll feel forever. And the highs I’ve experienced in the past year have been ten times higher than anything that’s gone before. It’s all extremes – and totally worth it!

Selena Gomez is bringing back the ‘Rachel’ cut