A classic Jewish breakfast or light meal of matzo, egg and either savory toppings or sweet. I grew up in a New Jersey town with lots of Jewish people, so I received an early education in things like the Seder, or Purim or Hannukah. I remember this dish as a quick meal my friends’ mothers would make when I came over during Passover.

I remember it as “maht-zuh-brai,” with the “brai” rhyming with “try.” I only later learned that it’s spelled matzo brei.

Matzo brei is a Jewish version of a universal breakfast: A bready thing with eggs. It’s sorta like huevos rancheros, or leftover dumplings and eggs. It is ridiculously simple, with as many incarnations as there are cooks.

Some like their matzo, which is an unleavened flatbread, heavily soaked in water or milk. Some don’t soak their matzo at all. A typical ratio of matzo to egg is 1:1, which is what we use here, but I’ve seen two matzo sheets to one egg as well as the reverse.

Then there is the question: Savory or sweet? 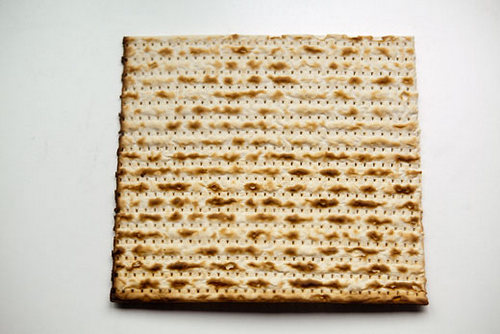 Savory matzo brei is really best cooked in schmaltz, rendered chicken fat. No other cooking fat comes close to being as good, except maybe duck fat. But vegetable oil is commonly used, as is butter – so long as the butter is kosher if you are keeping kosher.

Butter is the best fat for sweet matzo brei, which is most often served with powdered sugar, cinnamon sugar, apple sauce or jam or preserves. I added a bit of orange flower water to the recipe for a bit of extra oomph, but you could skip it if you want.

Ever eaten matzo brei? If so, how is yours different from ours?

Traditional matzo is what we use here, but you could also use whole wheat, or even gluten-free matzo, and this will still work. Do not use egg matzo, as it is too soft. And some places sell a thicker type of handmade matzo, often from a special flour called shmura. It’s fine to use, but you will need to soak it longer.

1 For the savory matzo brei, you will need to caramelize the onions first. Heat 2 tablespoons of the chicken fat or oil in a saute pan and gently cook the onions until soft and caramelized. Let them cook at medium heat for a few minutes, then sprinkle a little salt and a little sugar over them. Cover the pan and turn the heat to low. Stir occasionally. This should take 15-20 minutes. Remove from the pan and set aside. Wipe out the pan with a paper towel.

2 Beat the eggs with a little salt and black pepper in a large bowl. Soften the matzo a little by running them under cold water for a minute or so. The longer you wet them down, the softer they will be; it’s your choice. Break the matzo up into pieces of about 1/2 to 1 inch into the bowl with the eggs. Stir in the caramelized onions and mix well.

3 Heat the remaining 2 tablespoons of chicken fat in the saute pan over medium-high heat. Let this heat up for a minute or two, then pour in the matzo-egg mixture. Cook this, moving it around constantly, until the eggs are just barely set – you want them to be a little bit runny. This should take about 90 seconds or so. Serve immediately, garnished with parsley or chives.

1 Beat the eggs, 2 tablespoons milk, the salt, sugar and orange flower water (if using) in a large bowl.

2 In another bowl, crush the matzo into 1/2 to 1inch pieces. Add the cup of milk and mix well. Let this stand at least 30 seconds – the longer the matzo sits in the milk, the softer it will become. I like to let it stand 2 minutes. When you’re ready, move the soaked matzo from the milk bowl into the bowl with the eggs. Mix well to combine. 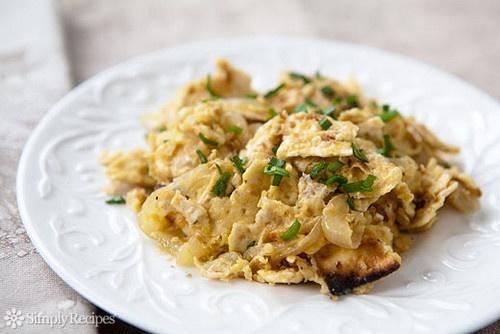 3 Heat the butter in a large saute pan over medium-high heat. Let it heat up for a minute or two before adding the matzo-egg mixture. Cook, stirring constantly, until the eggs are just barely set, about 90 seconds. Serve garnished with cinnamon sugar, apple sauce or something else sweet; jams and preserves are a good choice.