Makeup artist and queen of the “dewy dumplings” Nam Vo posted a quick yet enormously useful video to Instagram on Saturday, May 2nd, in which she teaches her followers how to flawlessly conceal a spot in mere seconds. “Dumplings, look closely. I have a zit. And I made it worse because I picked it,” she says to the camera, pointing at a spot on her forehead. “But – guess what – I’m going to show you how to conceal and cover.”
When it comes to concealer, you may be one of the many people who save money and trial-and-error time by using the same product for both undereye dark circles and any pimples you may want to cover. Understandable. Practical. Even logical. But you were today years old when you found out you’ve been concealing spots the wrong way.

Right off the bat, Vo drops some mind-blowing knowledge: “OK, so, first of all, you want to use a concealer maybe half a shade or a shade darker than your skin tone.” Hold up – we should be using a concealer that’s darker than our skin tone? Is this real life? Vo goes on to say, “Under my eyes, I usually wear something that’s a little bit lighter, but if you want to cover a zit, you wanna go deeper.”

And it actually makes perfect sense. “Use a concealer a bit darker than you would use under eyes, so it does not brighten the zit,” she says in the caption. Of course. It all makes sense now. 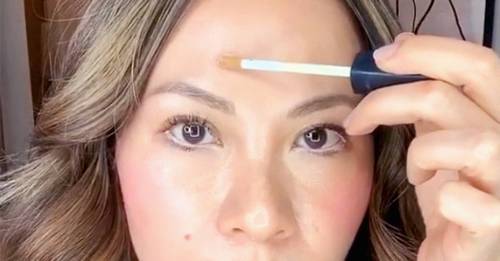 After applying her concealer of choice, Nars Radiant Creamy Concealer in the shade Ginger, and dabbing it with a Beautyblender, Vo says, “And then I’m using a foundation powder that’s more dense and has more coverage. And I tap not only the zit, but I tap the area around the zit so everything matches.” She applies Armani Luminous Silk powder foundation in shade 5 – which also appears to be slightly darker than her skin tone – with Make Up For Ever’s 144 brush. “And the secret, also, is don’t use a big brush,” she says. “Use a small, fluffy brush like this.”

Watch the video below, and then start shopping for a slightly darker concealer.

How to get skin so glowy it’ll start rumours…