Peter’s season of The Bachelor has barely started, and we’re already deep in the drama. In the sneak preview for the rest of the season, one clip in particular has spawned countless theories: Peter’s mom, in tears, pleading with Peter, “Don’t let her go. Bring her home to us!” Of course, there’s no real clue about who she’s talking about, but whoever it is must have made a pretty big impression on Mama Weber! So who could it be? 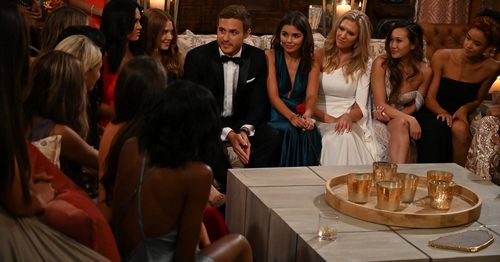 We know a few things for sure about the woman she’s referring to. First off, whoever it is must – obviously – be someone she’s met, which means that it has to be one of the women who gets far enough in the competition to visit Peter’s hometown (or who meets his parents some other way, as Madison did in the very first episode). An Entertainment Tonight report seems to confirm that, reporting that Barbara Weber’s emotional plea comes on the final week of filming. We won’t know for a while what the context of the moment is, but for now, here are four potential theories about who “her” is.

Someone please come get the Jonas Brothers, they’ve taken over TikTok. On Monday, the brothers shared a video recreating one of Keeping Up With the Kardashians’ most memorable feuds: Kim Kardashian’s infamous purse throwing from season three. “Don’t be f*cking rude!” is a motto that lived well past 2007, and while I don’t condone violence, I do support this message.

In the TikTok, Joe stands in for Kim while Nick acts as Khloé, and Kevin is an innocent bystander – or a Rob/Kourtney/Kris combo, depending on how you look at it. This got me thinking, who would the brothers be really in a parallel Jonas/Kardashians universe? Well, I personally see Joe as Kourtney, Nick as Kim, and Kevin as Khloé, but people on social media have some opinions of their own. Watch the video above (which got a personal seal of approval from both Kim and Khloé) and then keep reading to see a few of my favorite Twitter reactions.

Bring on March 2, because we know exactly where we’ll be: on the couch, with popcorn, watching the pilot of Breeders, a new TV show about relatable parenting struggles from FX. Starring Martin Freeman (Love Actually, The Hobbit: An Unexpected Journey) and Daisy Haggard (Harry Potter and the Deathly Hallows: Part 1), Breeders follows the life of married couple Paul and Ally and their two kids, Luke and Ava, who may or may not be the best and worst things that ever happened to them. Sound familiar?

Not only does the show’s overall concept hit pretty close to home for any parent, but the lines in season one are so relatable, we can’t help but laugh (mostly because we’ve said them all before).

With regard to to the family’s morning routine gone awry: “How can we be late again?”
In response to being asked, “Are you happy?”: “Who is happy with two kids under 7?” and “We’re not unhappy, but we are unhappy, you know.”
Said to a relentlessly crying baby: “Be reasonable, you prick!”
In response to being asked by your child why you didn’t pursue past dreams: “Life gets in the way, then you two came along. I’m not blaming you – just, you did ask.”
In response to an inappropriate question asked at an inappropriate time: “Sense the tone!”
In response to kids making all of the noise, always: “Jesus F*cking Christ, how many times do I have to tell you to be quiet?!”
A parent’s profession of love: “I would die for those kids, but often, I also want to kill them.”
And being a parent, in a nutshell: “I am medically deranged when they wind me up.”

Watch the hilarious and relatable trailer for season one of Breeders above.

The Celebrity Bob Is Here to Stay, and Liza Koshy’s New Cut Is Proof

This $25 Sweater Dress From Amazon Has Gone Viral