While its a hard fact that most fashion people feel pretty loopy by the final show of Paris Fashion Week, which just so happens to be Louis Vuitton, theres nothing that can make you wonder whether youre actually going crazy quite like walking into the Louvres private Lefuel Court — a majestic 19th century courtyard with a horseshoe-shaped staircase in the center — to find it transformed into something resembling a spaceship.

Artistic Director Nicolas Ghesquière has long had a knack for the futuristic, the sci-fi and the otherworldly (hes such a fan of “Stranger Things,” for example, that he included a T-shirt printed with the teenaged cast on his Spring 2018 runway), but was he about to transport us to an entirely different dimension for Fall 2018? Not exactly.

The beautiful collection that walked on Tuesday night was well-balanced mixture of past, present and future. Classic silhouettes from centuries ago, like lace-up waist corsets, dangly shoulder epaulettes and Victorian-style peplum coats, appeared alongside staples from the more recent past, like tweed jackets and pencil skirts, argyle knits, long leather gloves and simple, silk pleated skirts.

Then, of course, there were the must-have items of now: leather jackets (complete with shearling or embroidered collars); sporty, roomy crew-neck tops in a variety of textures complete with a Louis Vuitton logo; sexy, tailored trousers done up in sequins suede or pinstripes; and the sorts of fuzzy, cozy coats that millennial customers go crazy for, especially in hues like sunny yellow. 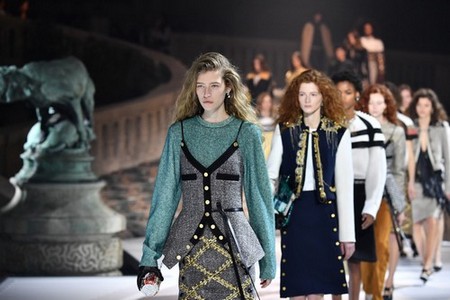 Elements of each era were expertly layered throughout the show. Basic, oversized sweaters were worn underneath fitted slip dresses adorned with ribbons, gold buttons and chains; old-fashioned houndstooth made its way onto patchwork silk tops, airy shirt dresses and even the sharp collars of blazers; office-appropriate skirts were paired with athletic or party-ready shirts (with fringes and sequins galore); and the drapey evening pieces that rounded out the finale were topped off with a contrasting collar. Who ever said you cant mix business and pleasure?

Heavy metal, holographic and computer-inspired elements were also big, with small, shiny handbags that recalled battery packs and larger ones that were patterned like a motherboard. The collections chain belts, chunky jewelry and embellishments were offset by the easy silk frocks and sporty separates, and since todays woman is all about mixing and matching — just like last seasons cult-favorite casual sneakers and regal brocade coats — this ones likely to be another commercial hit.

If his track record proves anything, its that Ghesquière is always several steps ahead, somehow knowing exactly what his customers will want to wear in the future — whether in six months when the collection hits stores, or years down the road when its passed on to the next generation of fashion fans. 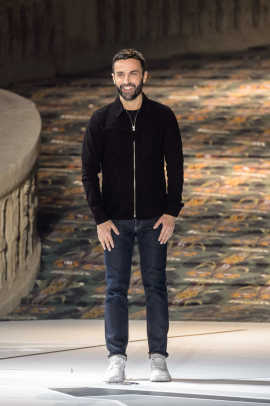 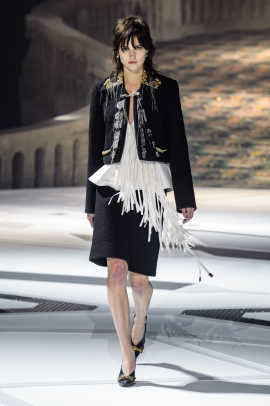 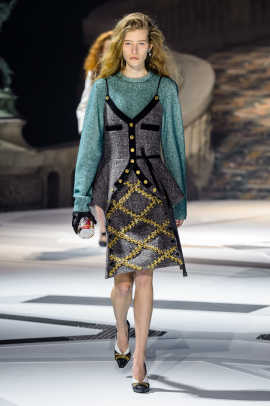 Click through below to see Louis Vuittons full Fall 2018 collection.

17 of the best alternative wedding dresses 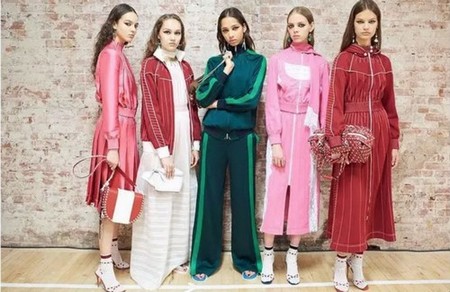 The Tracksuit Trend Gets A Modern Update