After interviewing Gwyneth Paltrow last year, I immediately came under her spell and left fully obsessed with her and her way of life, ready to give up my Chicken Nugget-based diet and commit myself to a life of ‘wellness.’ Such is the power of the founder of Goop, a company she says she started after discovering, “my calling was greater than making out with Matt Damon or whatever.” Was that not enough of a calling?!
Before I go any further, I must deliver a disclaimer: I am a certified member of the Gwyneth Paltrow fan club.

Now, a week after launching her now infamous ‘Vagina Candle’, and after years of challenging our perceptions of wellness from vaginal eggs to the empowering properties of psychedelic drugs, Gwyneth is launching her own 6-part Netflix series, The Goop Lab, with each episode exploring a different ‘alternative’ health trend.

It’s addictive viewing and just as jaw-dropping as you’d expect, with Gwyneth and her Goop team test driving some of the world’s most controversial wellness trends with insight from experts and scientists in their field to prove whether they have scientific foundations and REAL life affects. And TBH Gwyneth totally proved she was that bitch when she posed in front of a floral vagina at the show’s premier. GET IT GWYNIEEE!

Kicking off The Goop Lab with Gwyneth Paltrow series is the controversial topic of psychedelic drugs. Cue three Goop team members skipping off to Jamaica – where its use is not controlled by law – to take 3 grams of Magic Mushrooms via tea for a ‘trip’ monitored by therapists to help guide the emotions they release.

The practice is seen as an alternative to traditional talk therapy, as under the influence of the drug their subconscious issues and thoughts are bought to the surface and dealt with for the very first time. After losing her father to suicide 5 years before, Goop’s Jenny leaves the experience calling it, “five years of therapy in five hours,” after quickly uncontrollably crying when the drugs brings her grief for her father to the surface. Get the tissues, the results are powerful and REAL.

The most controversial or rather, game-changing, episode of the series comes as the Goop team enter a sex workshop which were set up by sex expert, Betty Dodson back in the 70s. Cut to a number of women attending the house of Betty naked, sitting in a circle and showing their naked bodies to each other, including their vulvas. Even Gwyneth goes as red as a face post a Vampire facial when she’s told about it from the safety of her office.

Just so we are clear, the vulva is not just a nickname – it’s the ACTUAL term for the clitoris and, as Betty calls it, “the lips and all the good sh*t that is around it.” The mission of this episode? Demolishing the shame women have around sex and most importantly their own sexual pleasure and masturbation. It’s all part of creating a positive body image and in the process Carlin Ross, the CEO of Betty Dodson’s foundation, inspects her vulva on camera with a mirror in hand, all to encourage the 44 percent of women who wouldn’t be able to recognise their own vagina to get down there and have a good look.

Bethenny Frankel Is Expanding Her Skinnygirl Brand Into Denim

In a bid to lower her biological age to 44.2 years, Gwyneth – who is actually 47 years old IRL – tackles a 5-day long diet called the ‘Fast-Mimicking Regime.’ Instead of calories it’s all about nutrients with Gwyneth’s daily meals coming in the form of sachets, teas and the occasional nut (LUCKY HER) with the number of calories and ‘food’ reducing every day. With at home videos – shot by Gwyneth’s daughter, Apple – the empire’s founder is a former shell of her energetic self but when her biological age is tested again it drops to 42.5 years old. That’s right, GP shaves one-and three-quarter years off her biological age by literally eating a small boxful of ‘food’ a day. We would take the burrito over that, ANY TIME.

In a bid to show the healing powers of mediums Dr Julie Beischel from The Windbridge Institute, a non-profit organisation that studies dying, death and what comes next, attends the Goop lab to give medium readings to the team. In an emotional scene, Goop staffer Caitlyn connects with her dead mother via Dr Julie, who reaches out and tries to hug Caitlyn before she reveals that a piece of artwork in Caitlyn’s house is her mother’s daily presence in her life. It’s powerful and spooky all at the same time but an insightful look at how energy beyond conscious life can/ could (delete as appropriate, sceptics) have a positive effect on our living, breathing lives.

Here’s a fun fact – courtesy of The Goop Lab – only 4.6% of the universe consists of physical matter. So, the show poses the question: surely the rest is made up of unexplained energy and that the human energy field has an incredible control over our internal health? To prove the power of energy healing, Gwyneth’s energy healer, John Amaral, agrees to have the ‘non-physical energy massage,’ filmed for the first time. As John moves his hands around Gwyneth’s body within six feet of her at all times, Gwyneth is seen twitching and uncontrollably moving as the energy within her moves around.

The results? She literally appears to be either having the most intense orgasm of all time or an exorcism. For all the comparisons, Gwyneth talks movingly about the birth of her daughter, Apple, and how she has a strange energy field around her caesarean scar and reveals that is why she needs the energy healing, to release the energy scars from this procedure. It’s basically in conclusion, an ‘Energy Exorcism.’ We are trademarking that.

Goop tries Snow-ga in swimwear and sub-zero temperatures and they remain physically hot. HOW the *actual* hell?

Joined by the Iceman himself, Wim Hof, the Goop team explore the idea of mind over matter. The Iceman is infamous for jumping into minus freezing waters and coming out feeling PHYSICALLY warm by forcing his mind, so he won’t freeze/ actually die. The reason? To prove that we can actually control our immune system and the way our body responds to life via the mind. This is after all the man who was infected with E. coli by doctors in 2009 on purpose and resisted the virus taking hold of his body by simply using the power of his mind to fight it. Cut to the Goop team heading out in the sub-zero temperatures, wearing nothing but swimwear doing yoga barefoot in the snow. Not only do they LOVE IT, they don’t feel the remotest bit chilly. Rather them than us.

Many will mock the latest Netflix series but as Gwyneth really couldn’t give two f**ks about her critics, she will be the last one laughing. Aside from that, shouldn’t she be praised for getting us talking about wellness AND, most importantly, removing the stigma around female sexuality? The Goop Lab is certainly getting us going… 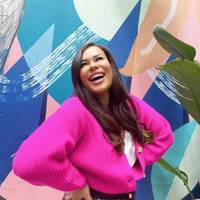 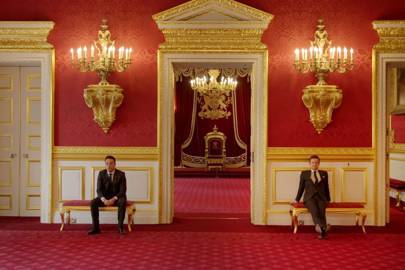